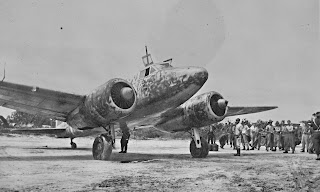 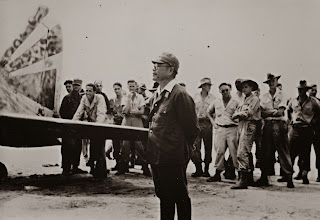 According to Minoru Akimoto the 10th Dokuritsu Hikodan Shireibu was redesignated from a former 10th Dokuritsu Hikodan Shireibu on 23rd October 1944. The original HQ unit had been established in Manchuria on 1st December 1940 and served in Thailand, Burma, the Philippines and Borneo. The transport section operated the Army Type 1 Transport Model Hei (Tachikawa Ki-54c) and evidently the Mitsubishi Ki-51 'Sonia', probably as liaison and command aircraft, the flying units under command being predominantly equipped with this type.

The 83rd Sentai has one of the most complex and confusing genealogies of IJAAF units, originally established in March 1941 as a mixed unit from the three Chutai of the 10th Sentai with the Type 97 light bomber (Mitsubishi Ki-30 'Ann') and Type 98 Direct Co-operation Aircraft (Tachikawa Ki-36 'Ida'). In July 1941 it was re-designated Independent 38 Air Group (Dokuritsu No.38 Hikotai) bringing under command a HQ unit, and the Dokuritsu Hiko Chutai (Independent Air Squadrons - DHC) 71st, 73rd and 89th to operate over Indo-China, Burma and the Dutch East Indies. In April 1944 it was reconstituted as the 83rd Sentai. The 71st DHC originally operated the Ki-51 but in December 1943 returned to Japan and re-equipped with the Type 1 fighter  (Nakajima Ki-43 Hayabusa 'Oscar'), operating that type in air defence duties over Sumatra and later forming a special attack (suicide) unit the 'Shichisho Shoken Tai' in Formosa. The 73rd and 89th DHC both operated the Ki-51 as principal equipment mainly in the convoy escort and anti-submarine role but Akimoto-san reports that the latter unit also operated the Type 2 two-seater fighter (Kawasaki Ki-45 Toryu 'Nick') in the anti-shipping role.

Lieutenant General Baba was Supreme Commander of Japanese Forces in Borneo and commanded the 37th Japanese Army. He formally surrendered to Allied forces during a ceremony at the Headquarters of 9th Division on Labuan Island. General Baba was subsequently found guilty of war crimes in relation to the Sandakan Death Marches, sentenced to death and hanged at Rabaul on 7 August 1947.

Thanks for the addition info, Bob and Nick,