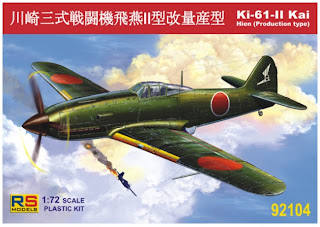 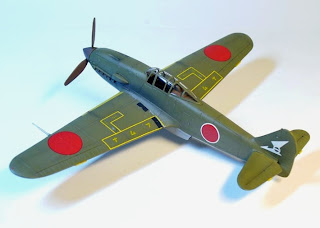 Another recent release that passed me by was the RS Models pair of a Ki-61-II Kai in the"bubbletop" (kit # 92104) and "razorback"(kit # 92105) versions. And there is a Ki-100 on the way too. Something of a puzzle these releases as the Ki-61-II Kai "razorback at least is already available as an excellent Fine Molds kit (as is the Ki-100). The RS Models kits are all plastic with no resin or photo-etch parts included. 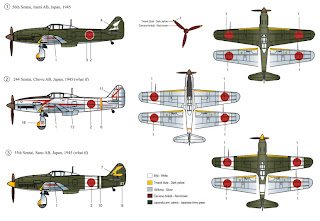 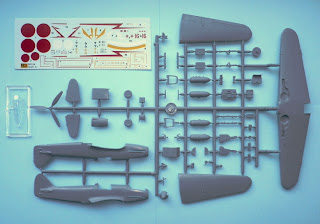 The "bubbletop", described as a Ki-61-II Kai Hien (Production type)" includes three markings options. A genuine 56th Sentai example which is the subject of a well-known photograph and two imaginary birds - a 244th Sentai air-to-air rammer and a 55th Sentai example. Despite the paucity of available schemes the "bubbletop" always seems popular with modellers. The made up example on the RS Models website certainly shows off its attractive and unusual lines. 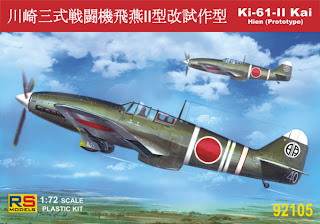 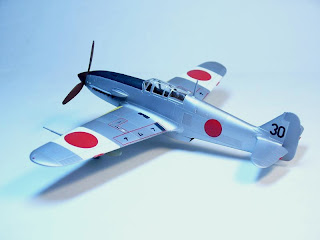 The "razorback", described as a "Ki-61-II Kai Hien (Prototype)", also includes markings for three options. There are two imaginary schemes for a late war Akeno fighter regiment example and an aircraft of the 5th Sentai, but perhaps more interestingly the second option is for a B-29 killer from the Army Air Evaluation Centre at Fussa (now Yokota). But should that number on the tail be red? 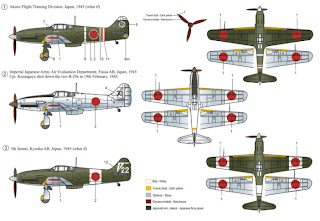 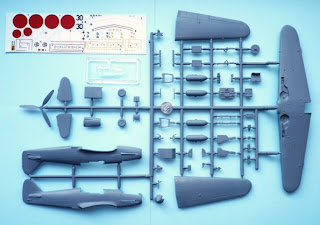 The Fine Molds Ki-61-II Kai "bubbletop" model was originally released in 1989, followed by the "razorback" in 1991. Each kit had a new frame of fuselage parts to be combined with parts from the Hasegawa Ki-61-I Tei which was also included in the box as a complete kit, with additional white metal detail parts consisting of a control stick, pilot seat, spinner, oil cooler intake and tailwheel. This arrangement seems to have been co-ordinated with Hasegawa as the instructions bear their logo and trademark details and there was a prominent Hasegawa sticker on each box. The distinctive monochrome box art was by Masao Satake who illustrates the Bunrin-do FAOW series covers.

Original Fine Molds Ki-61-II Kai box art
The Ki-61-II Kai "razorback" was subsequently re-released as a wholly Fine Molds branded kit in 2000 with the "donated" Hasegawa parts replaced by all new parts (a new Ki-61-I and Ki-100 "family" series had also been released) but somewhat surprisingly the "bubbletop" version did not also re-appear as expected. I say surprisingly because it is clear that the RS Models "bubbletop" sold out quickly and I have been unable to find one to review.

Fine Molds Updated Ki-61-II Kai released in 2000
Way back in 1966 Nichimo also released a 1/70th scale Ki-61-II "razorback" (note the absence of the 'Kai' suffix) that was the only game in town until the Fine Molds kit appeared. It made up into quite a reasonable model for the time, especially if dressed up with Hasegawa Ki-61 parts and the small discrepancy in scale was overlooked. It is still worth a look for the "retro-minded" and to compare with the more recent kits. The re-released version of this kit (shown below and by then a "Japanese Safety Toy" so post-1971), only revealed its scale in very small print on the box sides. The contents were unchanged. For some reason the earlier edition seems to be easier to find. 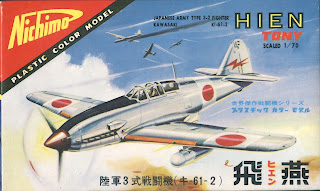 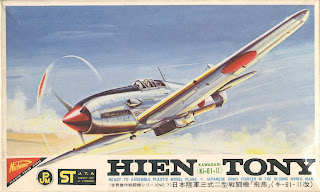 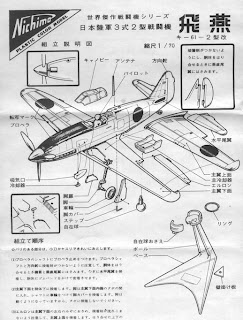 Nichimo's Ki-61-II - a pretty good effort for 1966
An earlier Fujimi kit from 1965 (issued under the Bachmann-Fujimi branding in the USA) also represented a Ki-61-II but was a much cruder kit than the Nichimo, poor in shape and with an especially hideous windscreen. When first released in Japan the box art depicted a Ki-61-I but the later more familiar box art corrected this. It is sometimes confused with the Nichimo kit but they are radically different. 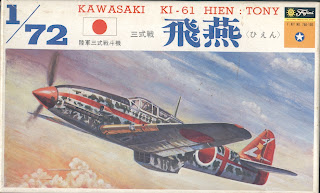 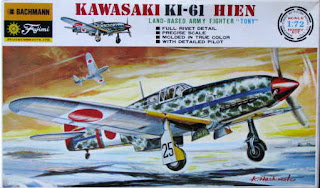 Bachmann-Fujimi Ki-61-II as released in the USA with K Hashimoto box art
I have always been a tad suspicious of the Ki-61-II Kai designation (with no real evidence I hasten to add). The Ki-61-II was reportedly a development with both the new engine in a lengthened, modified fuselage and originally a larger wing area, limited to eight examples actually constructed. This combination supposedly proved unsuccessful so for production the new engine was combined with an airframe which reverted to the standard Ki-61 wing and was identified by the suffix Kai for  kaizou (改造) meaning "modified" or "re-structured".  The shortage of engines subsequently led to the Ki-100 conversions. I have long held a sneaking suspicion that there might have been no actual designation distinction between the eight original "big wing" and subsequent standard wing Ki-61-II versions - and that the Kai suffix perhaps referred to the "bubbletop" modification instead.

The early Osprey/Arco Aircam book on the Tony, published in 1971, offered a few profiles of the Ki-61-II of somewhat dubious provenance but there is an excellent research article by Don Marsh and Jim Long at j-aicraft.com recording the various colour schemes worn by the surviving # 5017 that might inspire alternatives  or even a mini- collection. 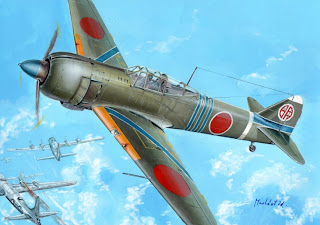 Very cool info. The bubble cockpit version needs to be purchased for a build methinks.