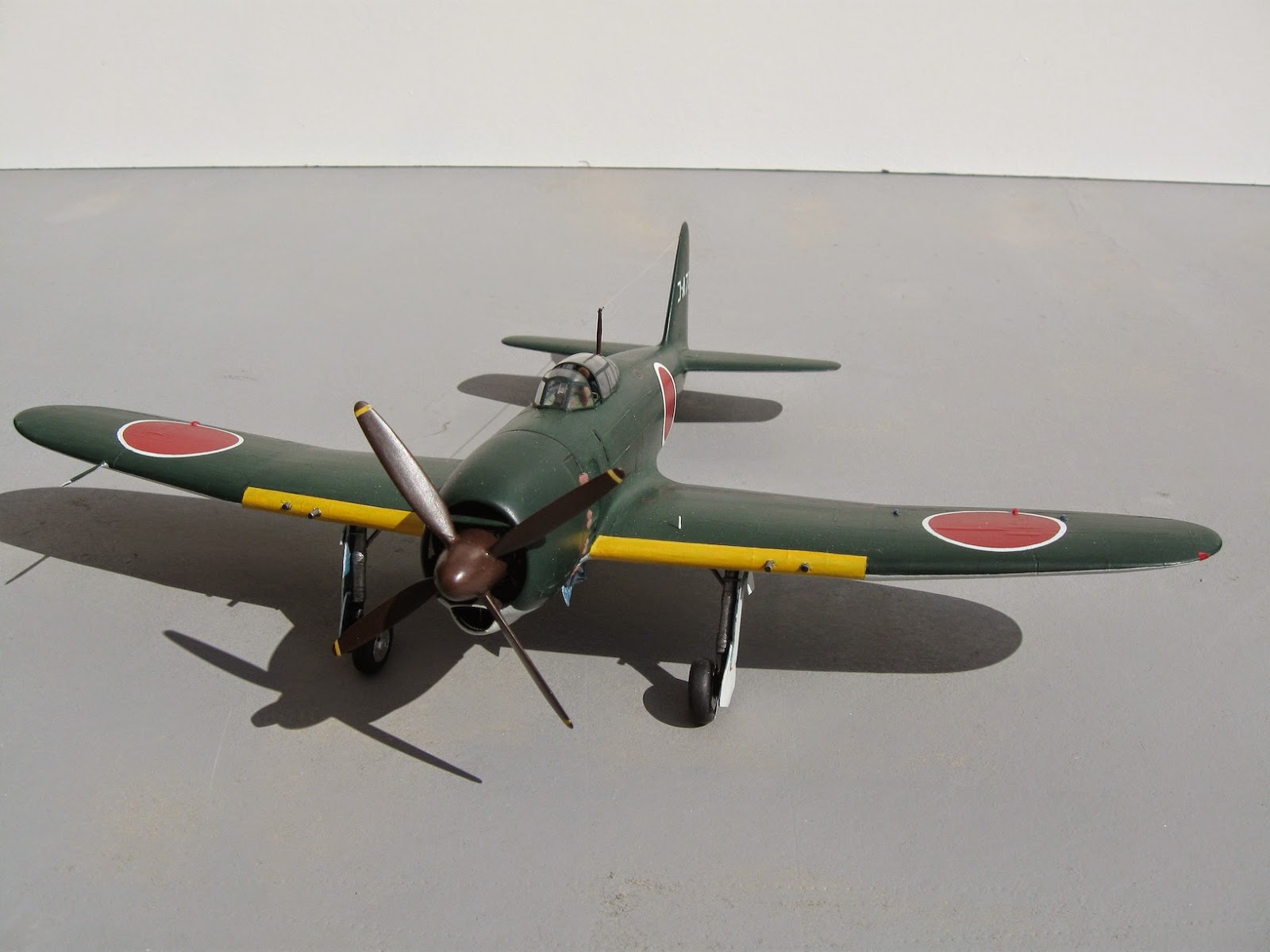 This splendid Reppu (烈風 - violent or furious wind) from the John Haas collection is entirely scratch built and really conveys the brute power and pugnacious look of the fighter. Inspiring. 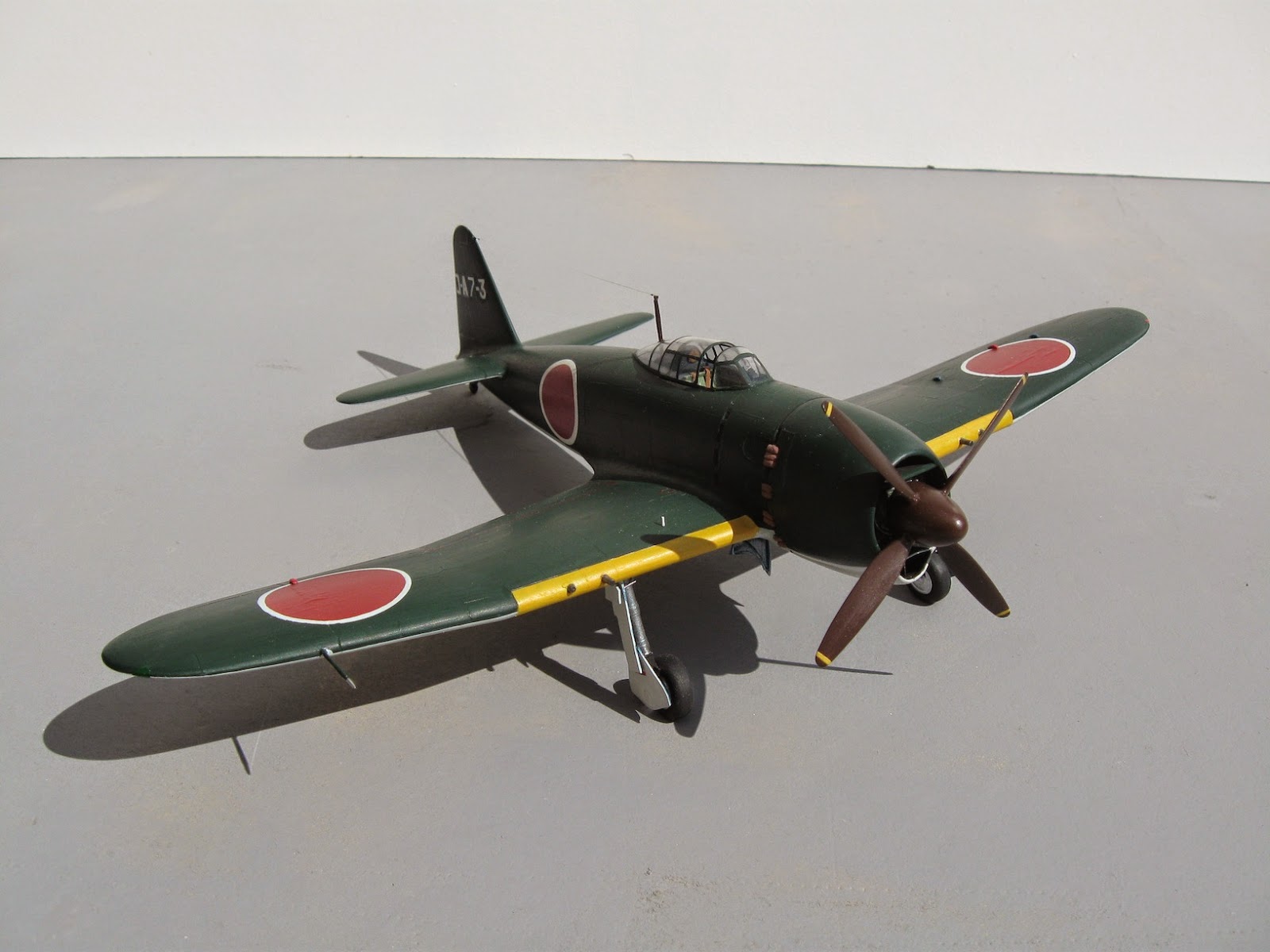 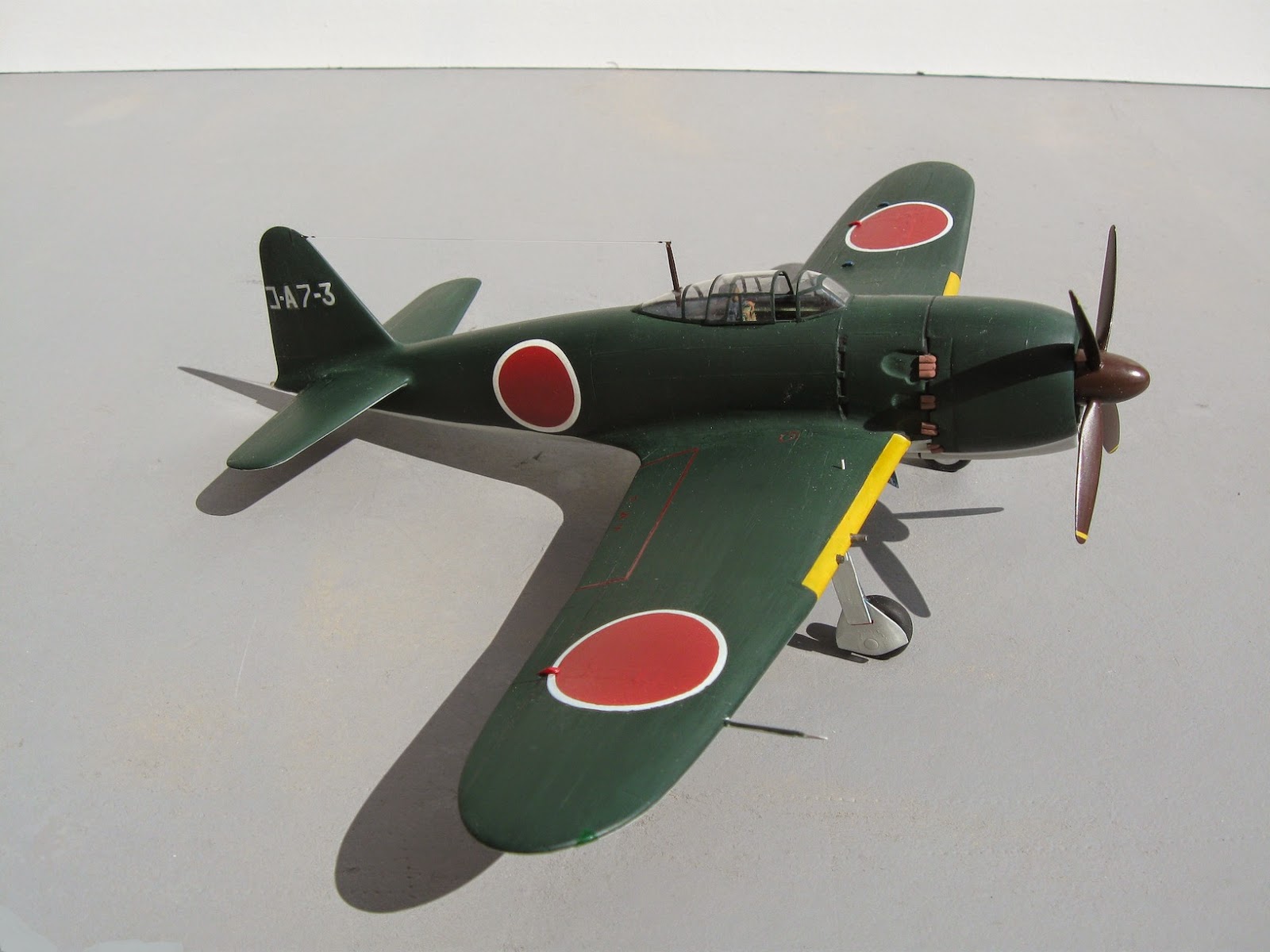 John carved the fuselage, engine  and wings from solid wood using 3-view drawings in a Koku Fan magazine of May 1985. The tail feathers were made from thick plastic card. 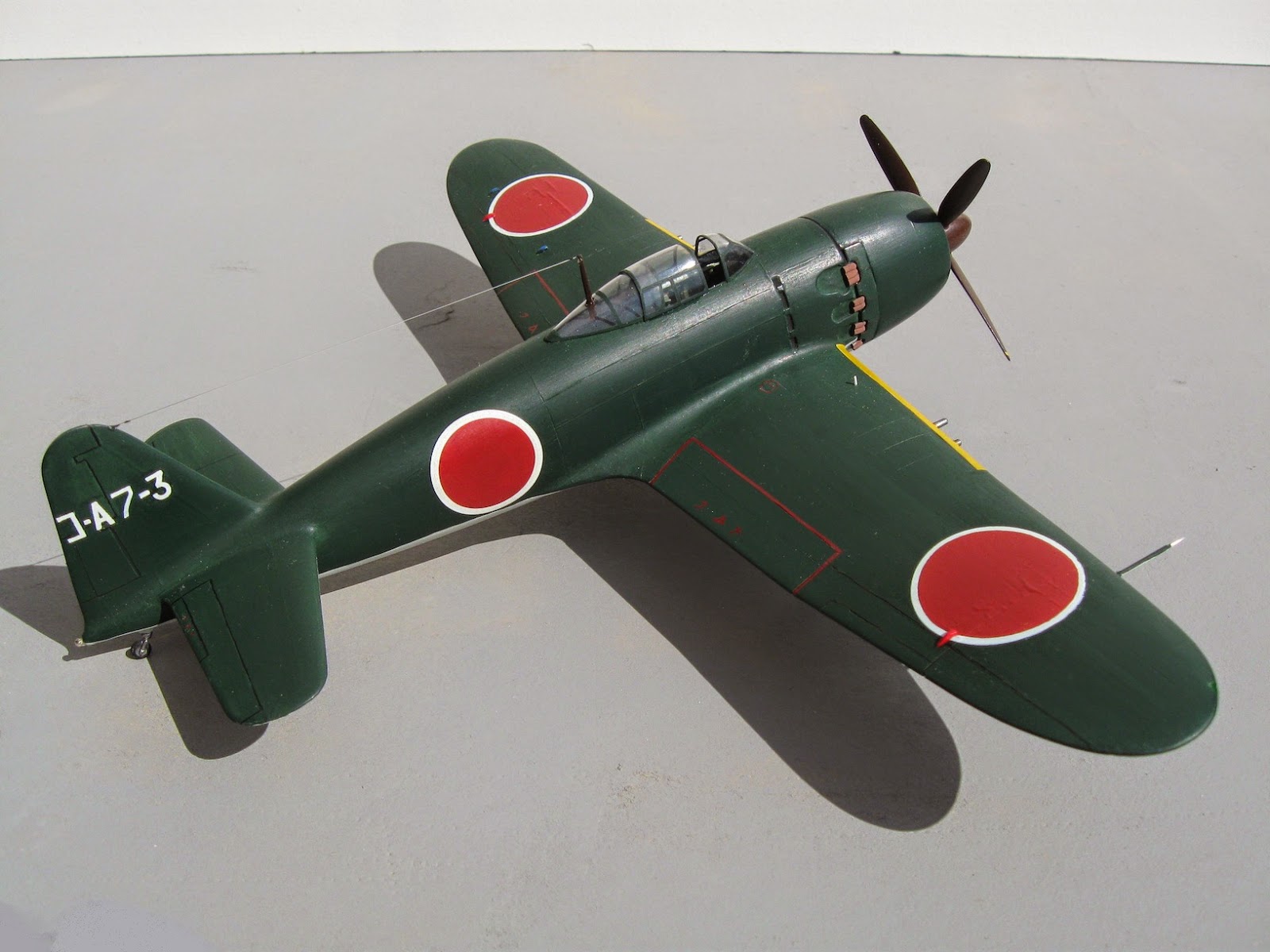 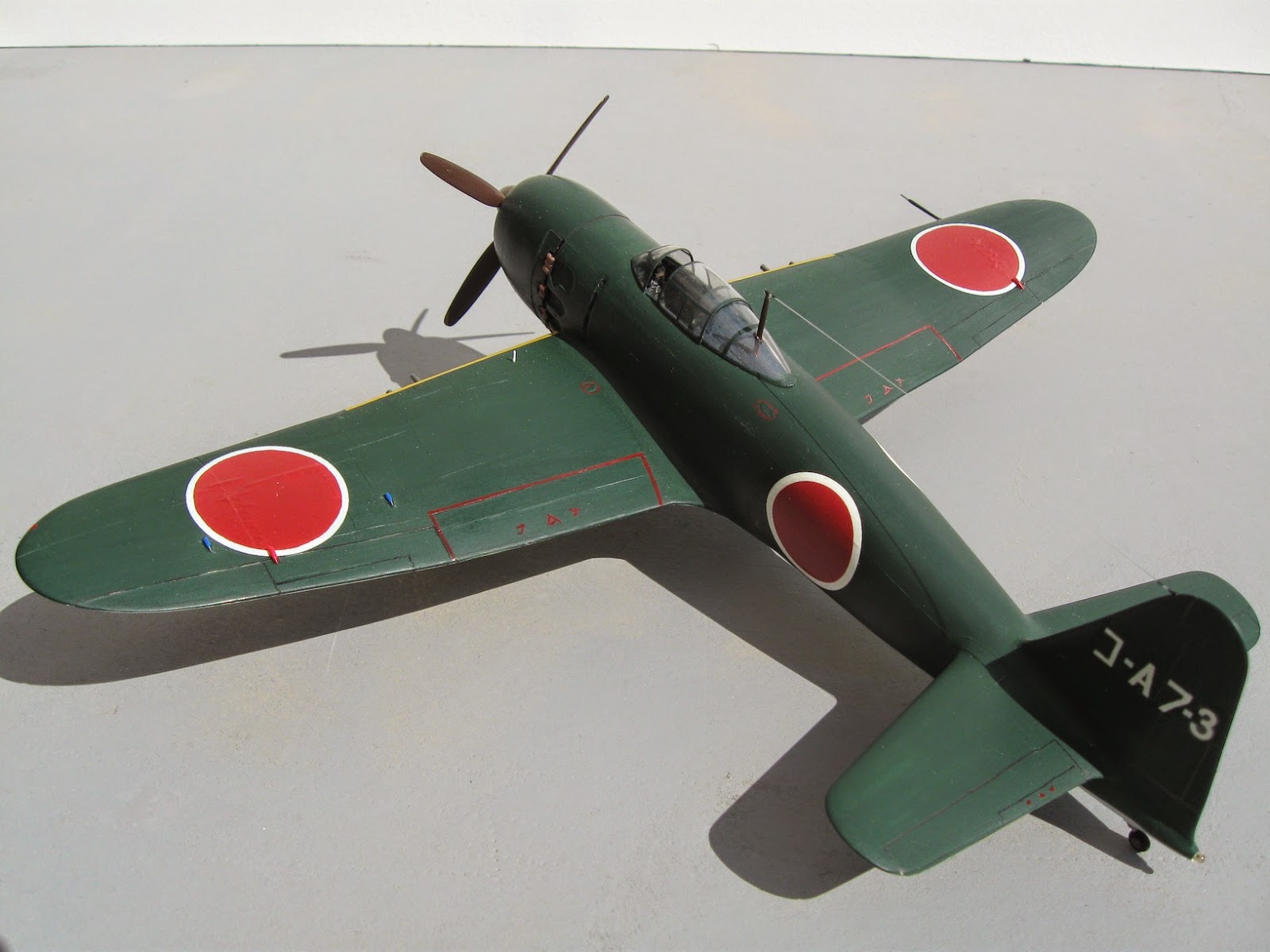 The undercarriage, prop, cockpit interior and all the smaller details were made from plastic scrap materials. Of special note is the excellent representation of the clustered exhaust outlets and corresponding indented airframe panels. And the prop is especially beautifully and accurately coloured in sharp and pleasing contrast to the horrible matt brick-red so many modellers seem to favour. Shortly after finishing this model John happened upon the excellent Fine Molds kit - typical! - but he was philosophical about it, appreciating how building Reppu had exercised and improved his woodworking skills! 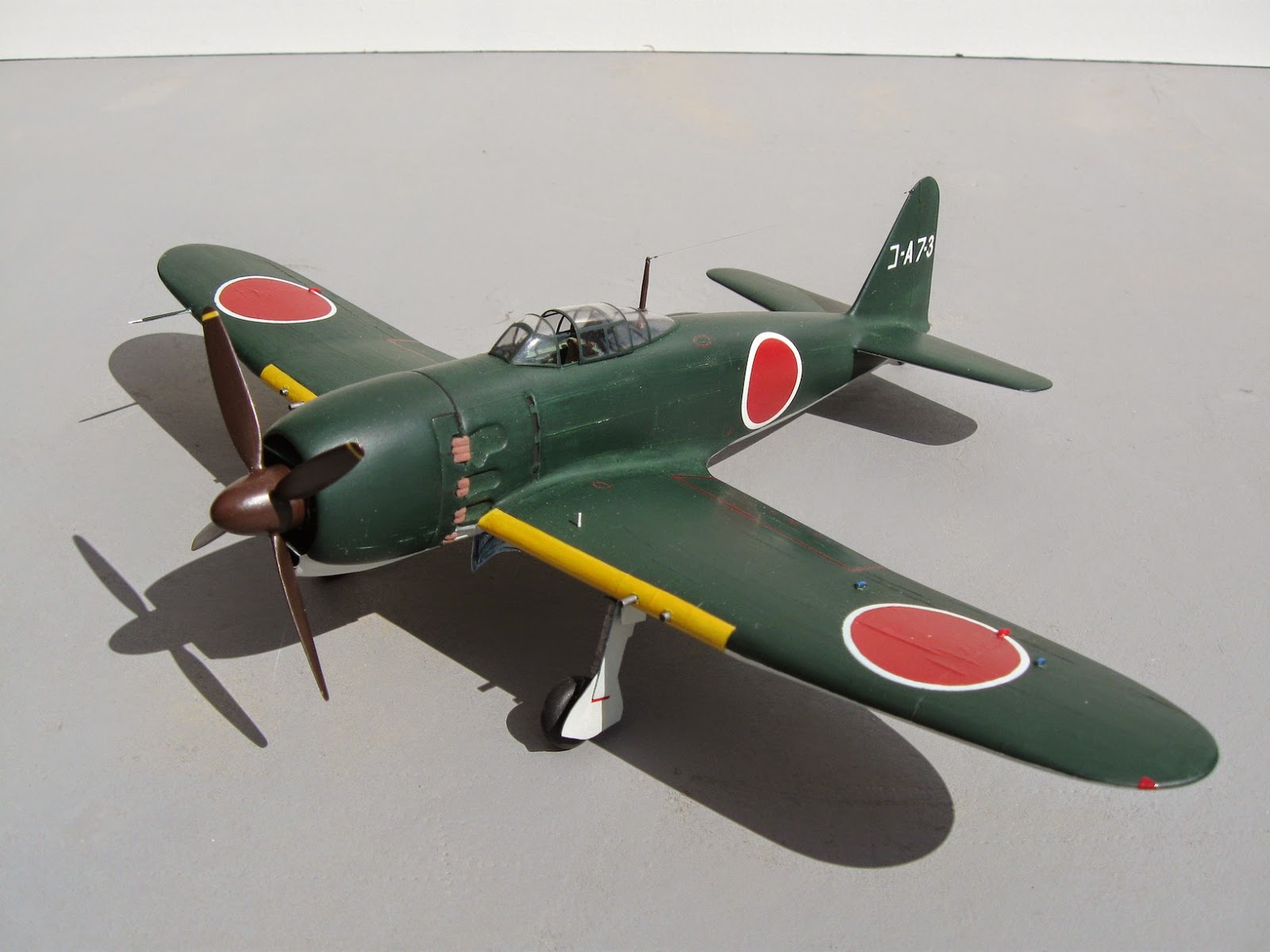 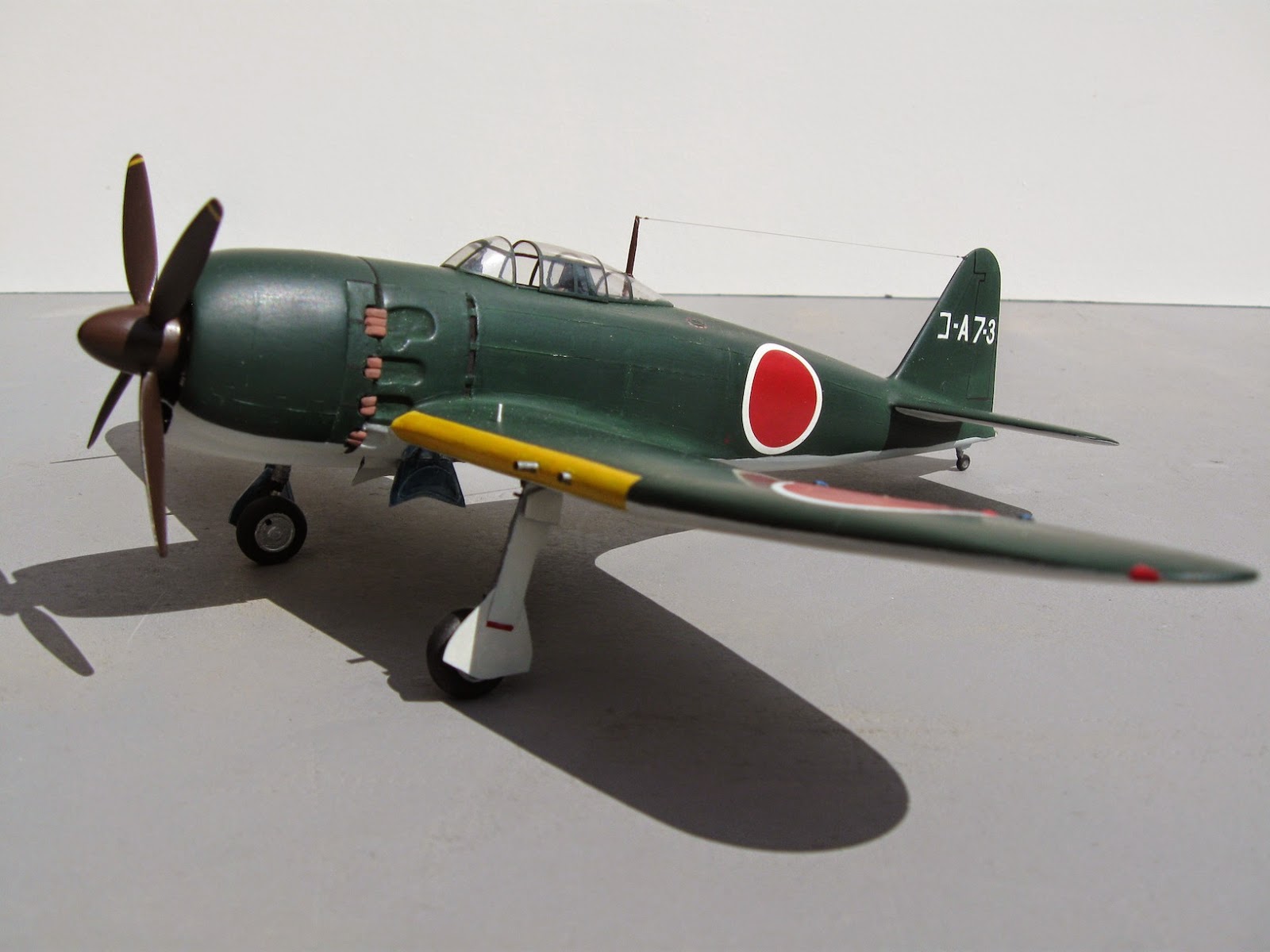 Reppu was originally intended as the successor to the vaunted Zero and first conceived in late 1940, but relegated to the back burner in favour of more pressing needs. Formal specifications for its resurrection were issued in July 1942 but development was protracted and the first example did not fly as A7M1 until May 1944, proving to be an underpowered disappointment offering little advantage over the A6M5. The original engine was the 2,000 hp Nakajima NK9K Homare but the design team and the IJN disputed whether the disappointing performance of the design was due to the power plant or the airframe. At that point the IJN was prepared to can the project, eventually formally cancelling it in August 1944, but Mitsubishi were able to persevere at their own expense, developing the design as A7M2 using the 2,200 hp 18-cylinder Mitsubishi MK9A (Ha(43)11) engine which flew for the first time in October 1944. This resulted in sparkling performance with agility provided by automatic combat flaps. The formidable promise of the A7M2 was beset first by an earthquake in December 1944 and then by a sequence of B-29 bombing raids which destroyed plans, jigs and tooling. By the war's end only eight examples had been constructed and Reppu was fated never to fly in combat. The IJN ordered everything about it to be destroyed. 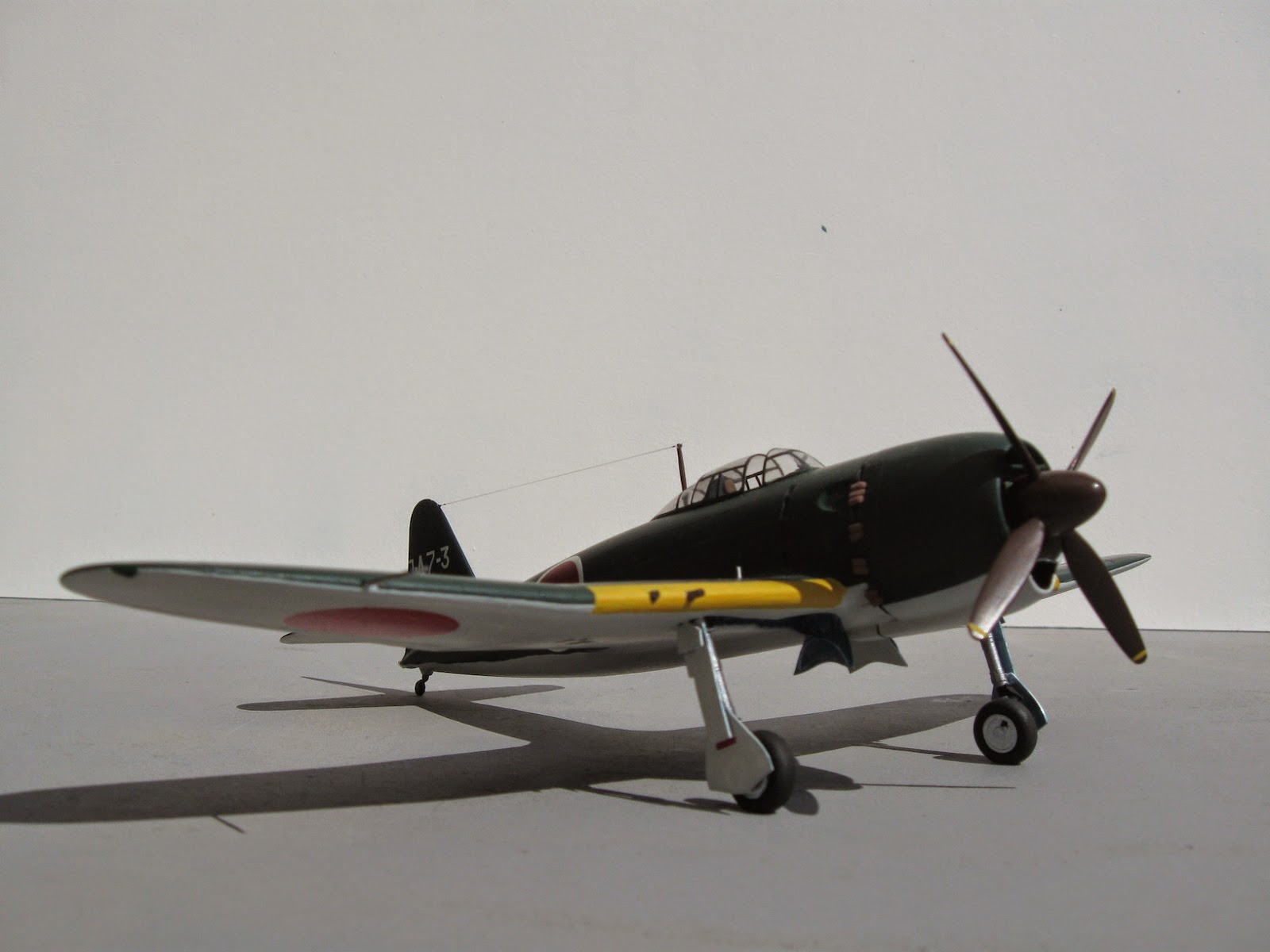 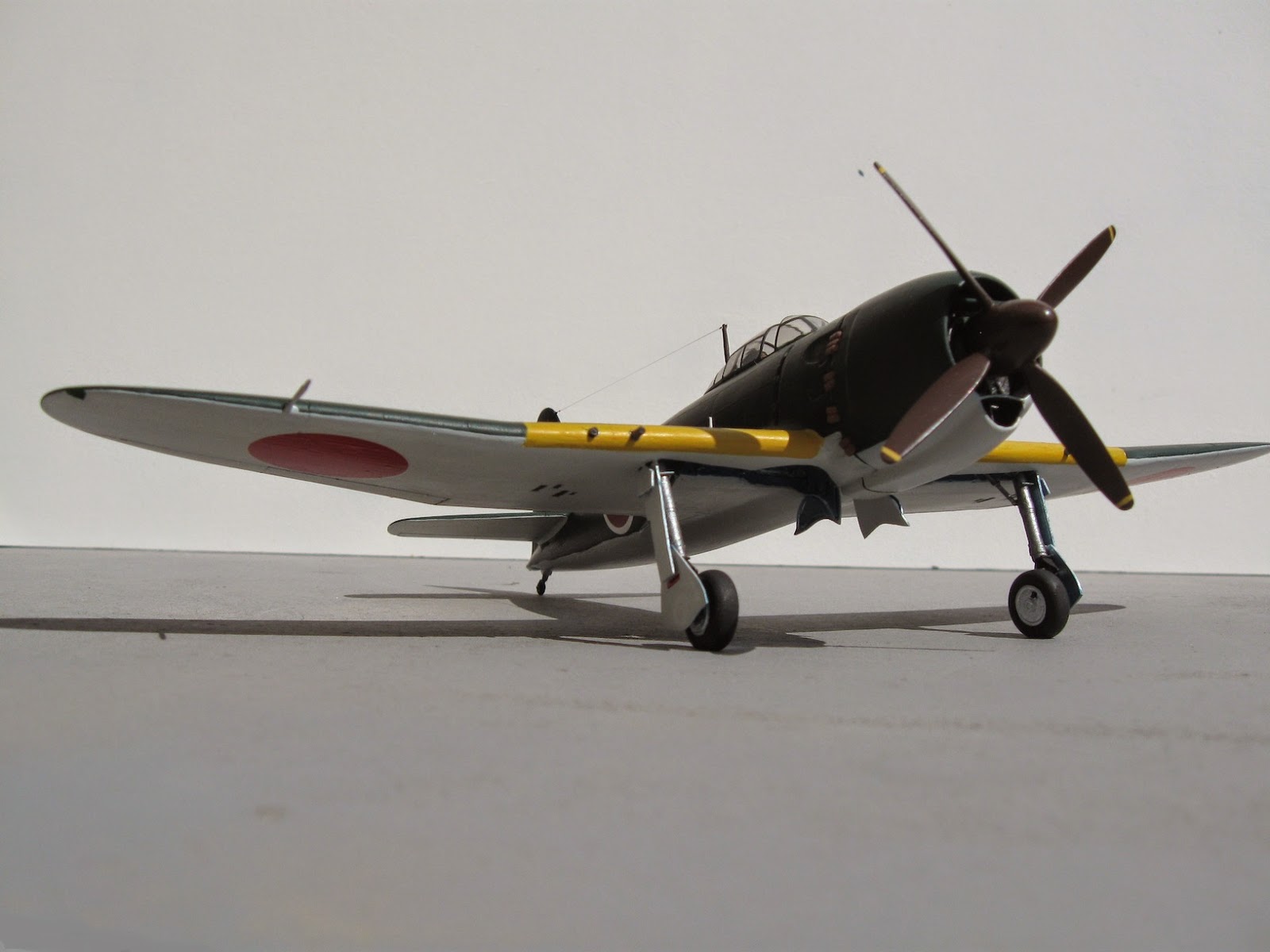 Allied intelligence were aware of the fighter and expecting to eventually meet it in the air assigned it the code name 'Sam'. According to Koku Fan's 1982 three-volume tome on Japanese Military Aircraft the tail code on John's model - Ko-A7-3 - represents the fourth prototype and the only intact example photographed at the end of the war but Gakken ('Reppu to Reppu-kai', Vol.40 of 2003) records it as the third A7M2 re-manufactured from the second A7M1. Either way it was the third aircraft to be officially accepted by the Navy Air Technical Arsenal (海軍航空技術廠 Kaigun Kōkū Gijutsu-shō) at Yokosuka, hence the number '3'. 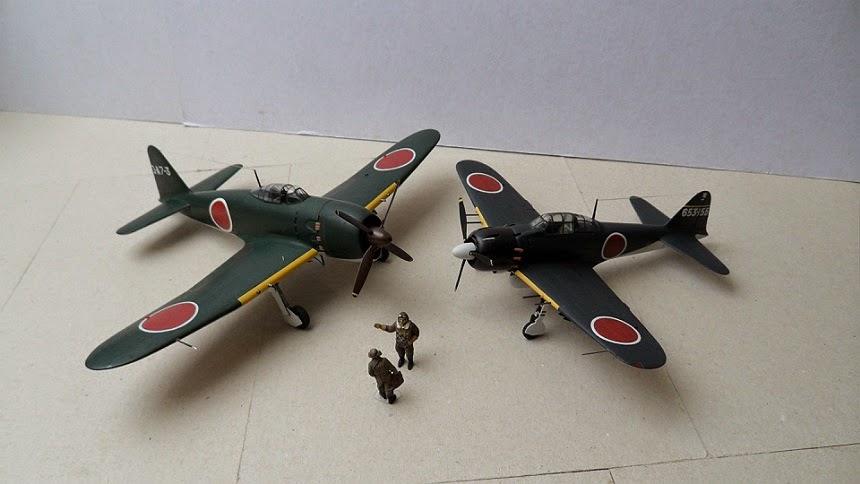 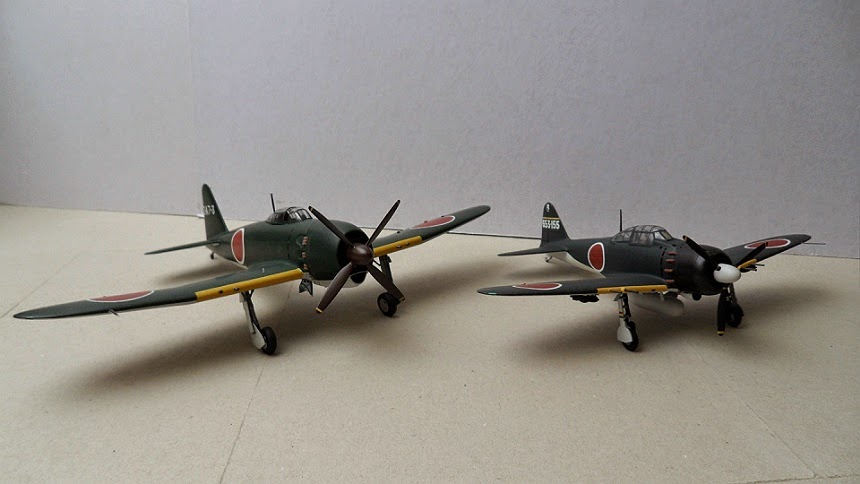 For modellers it represents a quintessential comparison piece to the Zero, Raiden and Shiden, as well as offering much potential for 'what if' and 1946 scenarios. More commonly seen depicted in its actual prototype markings, as here, the precise colours of which are still disputed, mainly concerning whether the under surfaces were painted in the yellow-orange for experimentals or the standard 2-6 grey for fighters. Reppu has been well known to Western modellers since the very basic 1/72nd scale Aoshima (or Aosima) kit of 1964 but there are now good kits available from Fine Molds in both 1/72nd and 1/48th scales.  Dedicated rather than general references to the type are mainly Japanese and in Japanese language and the best English language coverage of the type is to be found in Arawasi magazine # 3 of January 2006. 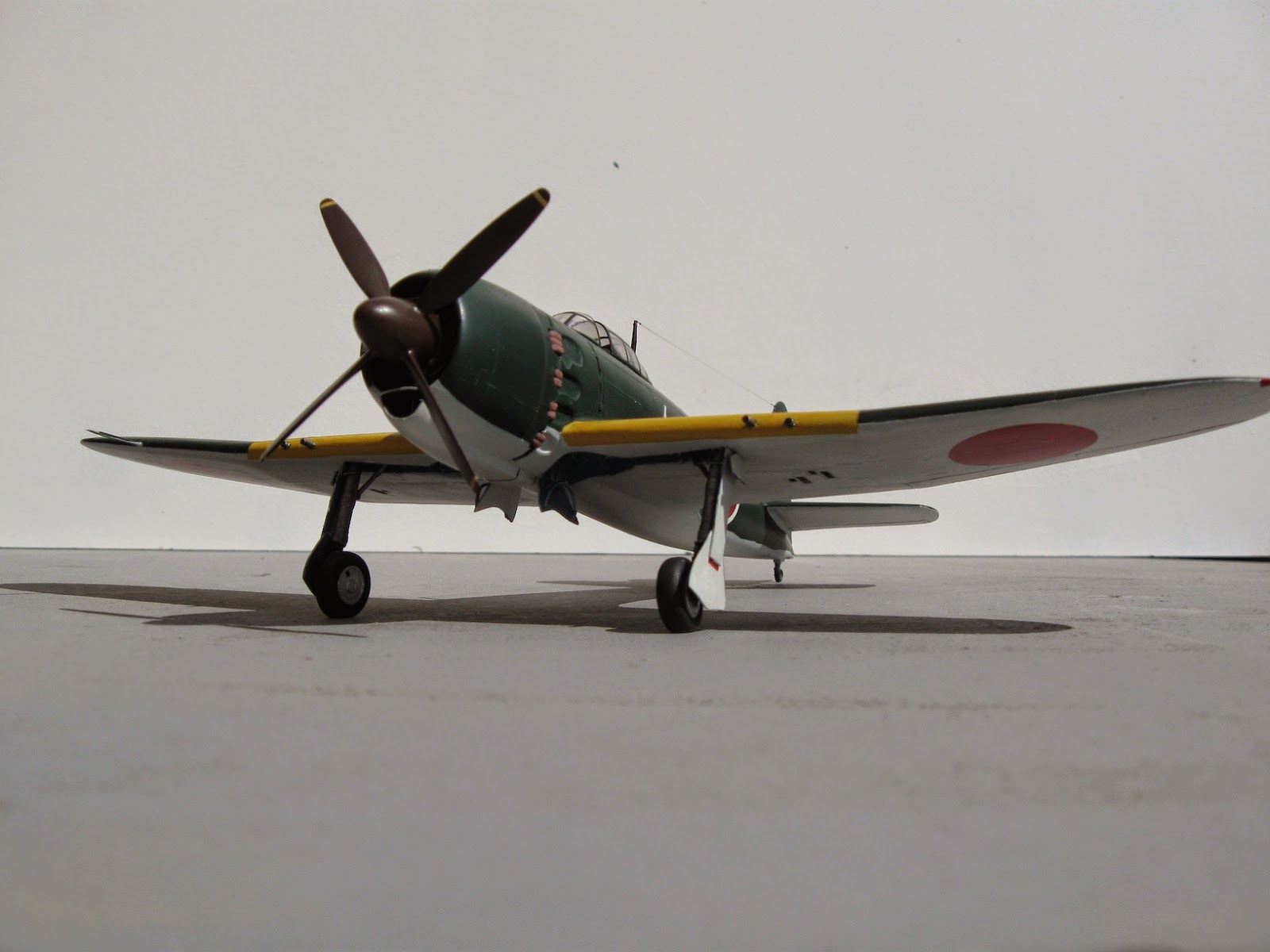 That is wood? I'm speechless.

Wow! Just wow! That is a truly great piece of "modeling".

Quite a beautiful model, and the rarity of the type as well as the literature on it make the model especially appealing. Thanks for sharing it, John and Nick.

I'm lost for words. I may drop modelling forever after viewing that exercise. I struggle with a plastic kit and am happy with my mediocrity but wow!, what magnificent work. There is a Leonardo da Vinci alive and well in the airplane modelling word. Congratulations