Lifelike Decals have released a welcome trio of 1/72 sets for the Ki-27, scaled down from their popular 1/48th sets for this aircraft. 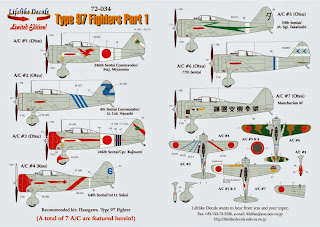 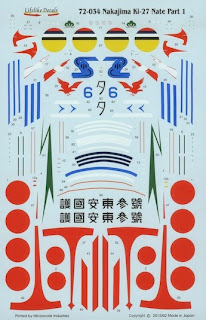 These are well chosen subjects and the inclusion of two early Homeland Defence aircraft is especially welcome. In addition to the subject specific markings the sheet contains sufficient stencilling and Hinomaru for two aircraft, the latter printed in the correct bright red colour. Two of the subjects will require the cowling painted red to match the fuselage flashes which could be a challenge. The recommended kit is the Hasegawa Type 97 but the decals would probably fit the ICM and RS Models kits too. 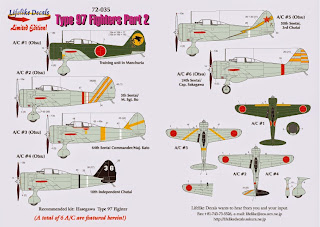 Set 72-035 Type 97 Fighters Part 2 (above) features decals for six subjects as follows:-
* The 200th Sentai was formed at Akeno in October 1944 with six provisional Chutai to participate in the planned reinforcement of the Philippines campaign with Type 4 Ki-84 Hayate fighters. Originally intended to be designated the 1st (1st-3rd Chutai) and 2nd (4th-6th Chutai) Air Regiments of the Akeno Air Training Division its full strength deployment was never realised and as the consolidated 200th Sentai it was incorporated into the 30th Fighter Group, a large ad hoc grouping of all Ki-84 units within the 2nd Air Division in the Philippines. Its aircraft were distinguished by a small red and white Akeno insignia at the top of the fin and large two-digit numbers painted across the fin and rudder in Chutai colours.

This is another excellent set with some colourful and well-chosen subjects, the first and second subjects being especially welcome. Again there is sufficient Hinomaru and stencilling for two aircraft with one set being white bordered for the first subject. 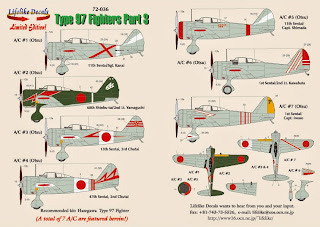 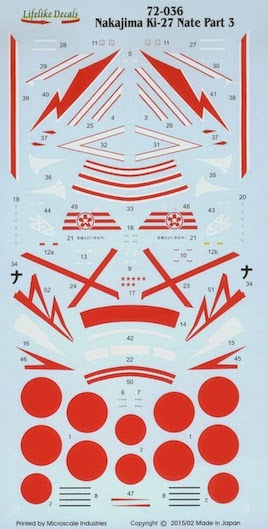 This is another excellent selection of varied subjects including three very unusual aircraft as well as a pair of famous aces. As with all Lifelike decal sheets full descriptions are provided for each subject providing interesting details and citing reference sources. All the sheets are well printed with glossy finish, excellent colour saturation and definition. One additional feature of these sets is the good quality ziplock bags slightly larger than the decal and instruction sheets. This facilitates easy removal and return of the sheets when examining them whereas the bags of some other manufacturers are so tightly sized that it can be difficult to remove and return the instruction sheets and decals without damaging them - and then there are those self-adhesive envelopes!

With special thanks to Keishiro of Lifelike Decals for kindly sending the decal sets for review.

Thank you very much for the detailed review, Nick. Seems like I have a lot to catch up in the decals department.

Great selection of Ki-27 decals (some subjects being very familiar!). Like you, I have my doubts with some of the colour choices, but there's plenty to choose from on each sheet. Good stuff.