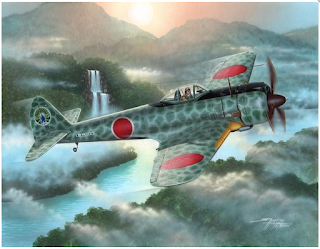 The Special Hobby Nakajima Ki-43-II 'Otsu' Hayabusa, Kit No. SH 72193, is essentially a re-issue of their earlier Ki-43-II kit with new parts and decals. Was it really 2009? How time flies as that seems only a couple of years ago! A Ki-43-III Ko was released the following year which featured in a build report by Jose Luis Fauste here. The previous Special Hobby Ki-43-II and Ki-43-III Ko kits as built by José A Granado were also featured here and here. 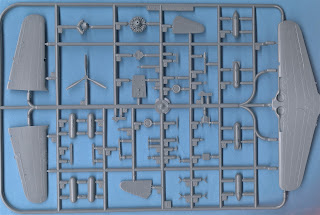 The new kit's main sprue and fuselage halves, moulded in MPM's rather 'soapy' mid-grey plastic, are identical to previous releases but an additional sprue contains a new cowling in three parts, consisting of the top and frontal rim with two halves and integrally moulded thrust type exhausts of the late production II, together with separate under cowling oil cooler and fuel cooler. The upper cowling intake differs slightly from the previous II and III Ko to represent a late-type production variant but the shape of the opening is not quite right. Cowling halves for the II Kai final production type with individual exhausts are also included but marked as not for use, as is a sprue of under wing racks and shackles. A clear parts sprue consists of a landing light cover, windscreen and separate canopy. The instruction sheet is now in colour, Eduard-style, and the decal sheet by Rising Decals, printed by Cartograf of Italy offers four subjects of which more anon. 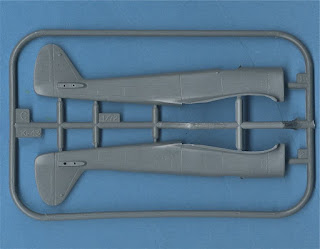 The 'blush' on wing roots and rudder in the above image is caused by scanning reflection and is not a defect in the plastic!

The prop and spinner are separate parts but the spinner has no backplate. Both smaller unarmoured and larger armoured headrests are included but only the latter is referenced. The kit includes late type under wing drop tanks, racks and shackles which are to be fitted outboard of the under carriage but the earlier style tanks are also included, again marked 'not for use'. Undercarriage parts consist of separate legs, wheels and covers. Surface detail is engraved and restrained with somewhat caricatured rudder, elevators and ailerons starkly representing the underlying frame structure. 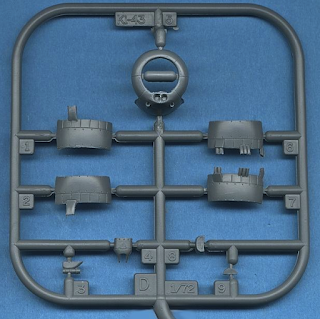 There is no photo-etch, which suits this modeller, but a colour photo-etch sheet for the kit is available separately and shown on the instruction sheet. This contains instrument panel and cockpit parts, seat, seat belts, wheel covers and engine wiring harness. Plastic cockpit interior as supplied in the kit consists of moulded on fuselage sidewall detail with additional parts, floor, two-part seat, stick, rudder pedals and nicely engraved instrument panel together with a separate gunsight. Not much will be seen through the small cockpit aperture anyway, especially if the canopy is modelled in the closed position. The interior colour is called out as Olive Drab with Gunze (GSI Creos) H304/C304 (FS 34087) suggested, presumably intended to represent the IJAAF # 7 colour. The engine is a simple relief moulding, somewhat chunky in appearance. 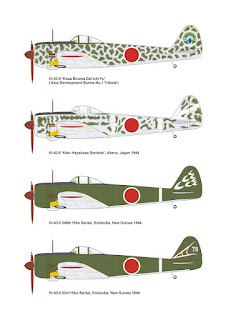 The main subject of the kit, as beautifully illustrated on the box art, is a Burmese presentation aircraft from 1944 with a very nicely printed peacock insignia for the tail. This aircraft, which supposedly claimed a P-51 in a dogfight over Silchar, also displays a presentation cartouche on the rear fuselage with the characters 興亜ビルマ第一賦 ('Koua Biruma Dai Ichi Fu' - Asia Revival Burma No.1 Tribute)* and was one of two aircraft photographed and described for a wartime press release (the other being 'No.2'), both wearing the distinctive reticulated camouflage scheme depicted by Special Hobby. Whether this was applied over bare metal or over a solid painted finish is open to conjecture. Base colours of a solid blueish-grey or reddish brown are known, the latter especially in the CBI theatre. 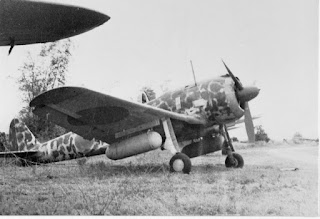 Most of the presentation 'peacock' aircraft were flown by the 64th Hiko Sentai and bore that unit's arrow emblem behind the peacock emblem, but the two aircraft in the press photograph do not display it. When the Japanese sponsored the creation of the Burma Defence Army (BDA) in early 1942 to replace the Burma Independence Army (BIA) which had been active in the conquest of Burma, they set up a staff training school at Mingaladon under the command of 15th Army Headquarters. This was developed into the BDA Military Academy which from September 1942 processed five classes of Burmese officer candidates, three classes of NCOs, three classes of Yonen Gakkô (youth cadets aged 14-16 years) and one class of pilots who were to be trained in Burma. The press release for the Burma presentation aircraft indirectly suggests that they were flown by Burmese pilots but interestingly they do not appear to display the white senchi hiyoshiki war front sign - the so-called combat stripe - on the rear fuselage. 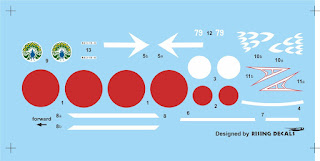 The other options on the decal sheet are for an aircraft as flown by 64th Hiko Sentai commander Tateo Kato in the 1944 Toho film 'Kato Hayabusa Sentotai' as shown here. This was not a genuine 64th Hiko Sentai aircraft based in Burma as suggested by Special Hobby but an aircraft of the Akeno flying school specially painted for the film and an anachronistic representation as the Hayabusa flown by the real commander Kato was a Ki-43-I. The remaining two subjects are both solid dark green aircraft from the New Guinea theatre representing the 248th and 63rd Hiko Sentai. Special Hobby suggest Gunze C129 Dark Green (Nakajima) for all four options. The decal sheet is sharply printed with good colour and the 64th Hiko Sentai arrow emblem is correctly symetrical.
This a straightforward kit which supercedes Hasegawa's rather basic 34 year old veteran Hayabusa and presents a most unusual and attractive subject, especially for those interested in representing Japanese satellite forces. The inclusion of the Kato 'film star' markings will also be of interest to those who like modelling aircraft from the movies, whilst the nicely printed 63rd and 248th emblems, even if not used with this kit, are welcome additions for use on other Hayabusa models. Recommended.

* The Kôain, 興亜院, or Asia Development Board, was originally established in Shanghai in 1938 when the previous 'China Board' was re-named. Although the Chinese Premier under Japanese sponsorship Wang Ching-wei was Board President it was composed of Japanese Army and Navy officers on the active list, the most significant being General Teiichi Suzuki the Chief of the Political Affairs Section. In early 1939 Kôain agencies were established in Kalgan, Peiping, Shanghai and Amoy. The Imperial decree establishing the Kôain bestowed authority to administer political, economic and cultural affairs in connection with the 'China Incident'. The relationship of this term to the Kôa of the Burmese presentation aircraft, if any, is unknown. The Summary of the Establishment of the BDA - Biruma Bôeigun Kensetsu Yôkô - of 9 August 1942 does not appear to use the term but sets out that the BDA "shall be placed under the tight control of the Japanese commander, and they shall be encouraged to assist, with sincerity, the Japanese forces for the task of defending Burma". Whether the presentation aircraft were paid for by subscription of the Burmese people, by Japanese commercial enterprises operating in Burma or as part of the Japanese political administration for the Greater East Asia Co-Prosperity Sphere - Dai-tôa Kyôeiken - is not clear at the time of writing. I was unable to find the term in any of the Japanese Military Administration documents relating to Burma.

Thanks for posting Nick, may have to pick one of these up.

The front cowl in the photo ('Ki-43-II in reticulated camouflage scheme') seems to be in a different colour, could it be yellow ?

Yes, Martin, I think so. Cowling rims were sometimes painted in squadron or flight colours to denote formation leaders.

Thanks for the review, Nick.