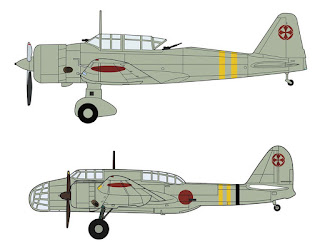 In September this year Hasegawa are releasing a combo kit of their venerable but still nice ex-Mania Ki-51 Sonia and Ki-48 Lily kits in 1/72nd scale with markings for the Hokota Army Flying School. The pre-release information suggests that decals will be included for the two aircraft shown above and also a camouflaged version of each. The combo kit is expected to sell for approximately £20 ($26) direct from Japan.

Hokota originated as a branch of the Hamamatsu flying school and specialised in training crews for attack and light bomber units with its own research department exploring tactics and types of ordinance. The distinctive insignia was a play on words with 'hoko' (meaning a long-handled Chinese spear or pike) represented by four spearhead shapes combined to resemble the character 'ta' (田 - meaning a rice field) set against a Hinomaru (sun's disc).

Thanks for the heads up Nick. Too bad I already have too many Ki-48 kits in the stash already.

Thanks for posting this notice, Nick.
Regards,
Ken Glass