The fifth and final instalment of Ken Glass' photographic trawl of Japanese aircraft subjects from the IPMS USA Nats. 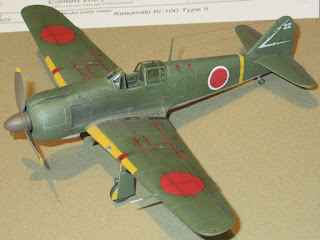 A Ki-100 in 244th Hiko Sentai guise built from the recent Aoshima kit by Joe Youngerman. It would be easy to presume that the scale is larger than 1/72, testimony both to Aoshima's moulding finesse and Joe's exceptionally neat and sharp paintwork.

This Kugisho P1Y 'Frances' night fighter by Bill Brickhouse of Newport News VA was built from the Hasegawa 1/72 kit and very nicely too, with really excellent colouring. This is a great looking aircraft that doesn't generate enough interest despite the fact that we have been spoiled with a choice of two very good old and new kits by Revell/Takara and Hasegawa. 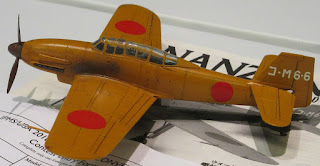 This Tamiya Aichi M6A1-K 'Nanzan' (Southern Mountain) from the Tamiya 1/72 kit was crafted by Bill Spear of Lawrenceville, GA. 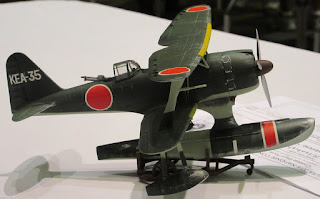 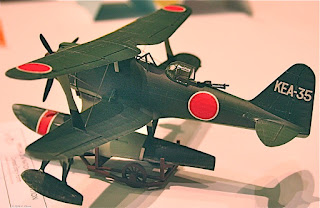 Jerry Brewer built this iconic Mitsubishi F1M2 'Pete' from the old Tamiya 1/50 kit from 1967. Is there a Japanese version of 'Murphy's War' where an irrascible aircraft mechanic from a torpedoed Japanese ship resurrects an abandoned Pete on a remote Pacific island to attack the US submarine responsible when the war is already over? There ought to be. Studio Ghibli? 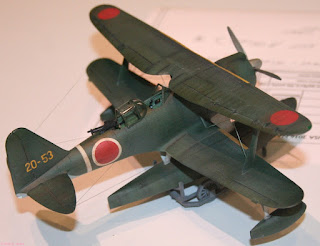 Another Pete, this time from the more recent Hasegawa 1/48 kit but builder unknown. It was surprising to see no E8N1 'Dave' floatplanes  from the new Hasegawa kit but I guess that might be down to timing. 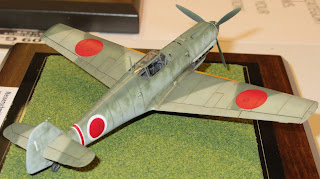 This Messerschmitt Bf-109E in Japanese guise was built from the Tamiya 1/72 kit, believed to be by Barry Nurmerick. Extraordinary because it looks as though it ought to be to a much larger scale. Grand job!

An Ohka Special Attack flying rocket bomb from the Fine Molds 1/48 kit. There is now evidence to suggest that the wings and flying control, surfaces on some of these aircraft were doped aluminium and not the light blue-grey interpreted from colour photos. Although there are remnants of fabric purporting to be from Ohka from the USMC and Yanks Air  museums which are light blue-grey.

Another Ohka, this time made from the diminutive kit that used to be incongruously included with the Hasegawa 1/72 G4M1 'Betty'. 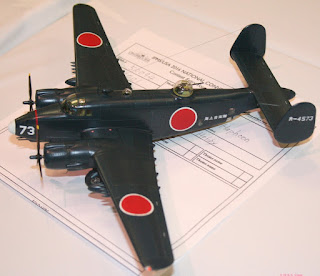 And last but by no means least a PV-2 from the Special Hobby 1/72 kit in post-war Japanese markings. A striking, unusual model and beautifully done. 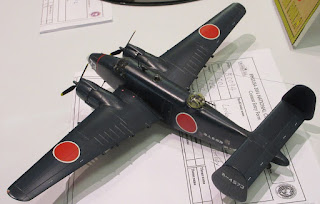 With special thanks to Ken Glass for taking and sharing this splendid collection of photographs. And that really is all folks! 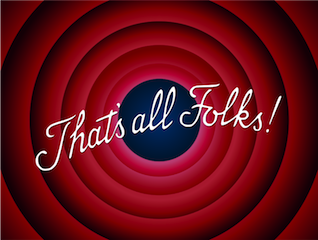 Thanks for these postings.


Great looking models. Funny you should mention the F1M guerilla pilot idea. Leiji Matsumoto did a manga on that very subject.

Thanks for that interesting link F_IV! Ohara's War!
Regards
Nick

To your comments on the Dave kit, I cannot recall seeing one built online, other than at the Hasegawa site. It looks like a beautiful kit, but have yet to buy one myself. Now if it was a Jake....