More pics from the IPMS USA Nats courtesy of Ken Glass. This time all IJN subjects again. Please do get in touch to correct or add any attributions, thanks.  My presumption about the origin of that nice Ki-43-I model published yesterday was wrong and I have now updated the blog article and added another pic. I should have known better because Ken had already identified the manufacturer on each pic and that one was coded 'Has' . . .

Ken has since told me that he couldn't get a shot at a low enough angle to capture the kit's 'broken-backed' appearance but that it could certainly be seen by the unaided eye. In case anyone wonders what I'm on about all is revealed here although focussing on the Ki-43-II kit. The Hasegawa kits appear to be based on the Matsuba Minoru plans which show on both the Ki-43-I and Ki-43-II a distinct re-angling of the upper fuselage line from the rear of the cockpit that is not evident from photographs and has the unfortunate effect of disfiguring the aircraft's true aerodynamic form. 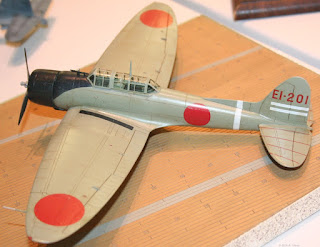 This impressive Aichi D3A1 'Val' on carrier deck display was built from the Hasegawa 1/48 kit - unfortunately builder unknown. Good looking colour choice on the model. 'EI-201' led the 21st Section of the 1st Hikotai from the carrier Shokaku during the first wave dive-bombing at Pearl Harbor and was flown by Lt Masao Yamaguchi with NAP1/c Fumio Sumeno as his observer-gunner.

Another Pearl Harbor 'Val' from the Hasegawa 1/48 kit, this time crafted by Craig Livingston and displayed on a mirror base with the canopies opened and the rear gun deployed. This aircraft 'BI-231' was flown by Lt Cmdr Takashige Egusa with  PO Tatsu Ishi as his observer-gunner. Egusa led the second wave dive-bombing attack at Pearl Harbor from the carrier Soryu, releasing his bombs against the USS New Orleans. The garish colour scheme, said to have been applied to aid identification and reforming and for which the aircraft was reportedly nicknamed 'jajauma' (じゃじゃうま) has been variously interpreted over the years but Craig's model appears to be based on the convincing profile and first hand descriptions in Sam Tagaya's excellent Osprey title 'Aichi 99 Kanbaku 'Val' Units 1937-42', # 63 in their Combat Aircraft series. Sam states that 'jajauma' refers to a ceremonial horse adorned in red but dictionaries also describe it as a colloquial term for a restive horse or a shrewish, unmanageable woman! 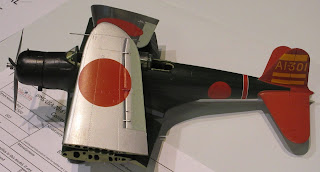 This Nakajima B5N2 'Kate' displayed with wings folded was built from the Hasegawa 1/48 kit and represents 'AI-301', the famous lead aircraft of the first wave level bombing attack against Pearl Harbor commanded by Mitsuo Fuchida (as navigator-observer) with Lt Mitsuo Matsuzaki as pilot and PO1/c Tokunobu Mizuki as radio operator-gunner. The actual colour schemes of the Pearl Harbor Kates have long been in contention due to various depictions and sometimes conflicting descriptions so modellers are blessed with the opportunity for personal interpretations. 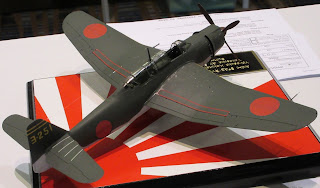 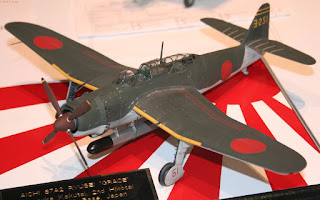 This formidable looking Aichi B7A2 'Grace' torpedo bomber was built from the Hasegawa 1/48 kit and displayed on a splendid Rising Sun base with black and gold nameplate. The model represents 'Yo-251', an aircraft of the Yokosuka Kokutai's 2nd Hikotai in Japan during the summer of 1944. Ken believes the model was crafted by Randy Lutz who had cited a Swedish camouflage colour for the topside black green. And very good it looks too - although perhaps just a wee bit too matt for an aircraft in service. 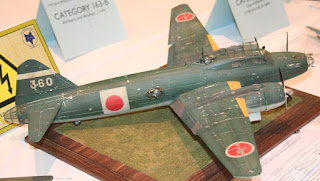 This Tamiya Mitsubishi G4M1 'Betty' in 1/48 scale is believed to have cbeen built by Andrew Frill and represents a moderately weathered bird, probably from 702 Ku (although I don't recognise that particular tail number and stripe combination), with what looks like a replacement starboard flap.  and the unusual flag-type fuselage Hinomaru. 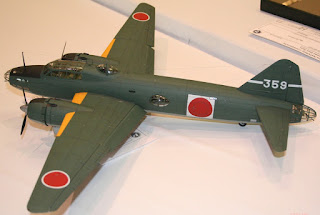 Another Tamiya G4M1, this time '359' of 3rd Chutai, 705 Ku operating from Rabaul circa 1943 and displayed in a pristine albeit very matt condition as suggested by photos. 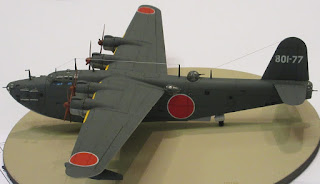 Dropping a couple of scales now for a topical Kawanishi H8K2 'Emiy' flying boat made from the very nice LS/Arii 1/144 scale kit by David Pratt. In 2010 Rob Taurus of the Czech Republic released a comprehensive detailing set for this kit which included resin engines and beaching wheels, vacform canopy replacements and a photo-etch sheet, but I do not know if it was used for this model which represents a flying boat of the 3rd Hikotai of 801 Ku based at Yokohama, Japan during 1945. 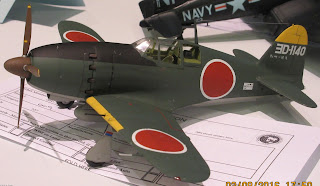 That's all for now folks! More to follow. With special thanks to Ken Glass for taking the pics and sharing them.
Image credits: All photos © 2016 Ken Glass; formatting, presentation and write-ups by 'Straggler'
Posted by Straggler 脱走兵 at 13:11

The 1/48 Hasegawa Ki-43 series is certainly buildable, but as you described it's side profile is really off. The engineering of the kit, with the wingtips having a portion of the aileron included, was also unusual. Of all the different 1/48 Japanese types they created the past 20 years, the Hayabusa was their least impressive effort. I have wanted to take their cowl and other detail parts, and marry them to a Fine Molds fuselage and wings.

Thanks again to Ken for taking the images!

Glad you liked Nick's postings, Dan - and to all the others who wrote in with comments. Nick's research for his descriptive write-ups on each model was more time consuming than was my part. Nick deserves most of the credit. The rest goes to the builders, for letting us see the results of their talents.

New-to-me at Columbia's IPMS show was application of approximately 12 inch long pvc pipe extensions on the legs of all display tables. That improvement saved knees and backs, mine included. It also improved my photography and one's view of displays.

It was a well run show. I wish I had more time while there, to speak with more builders named in the descriptions of their models.

Thanks again to all for the kind words,
Ken