Lifelike Decals have just released no less than four new decal sets for the Ki-61 in 1/48 scale. In addition to re-issuing the three 244th Sentai sets in updated format as 48-003(R) to 48-005(R), they have also released a new set 48-050 'Kawasaki Ki-61 Part 1' with decals for four aircraft sporting victory markings. With the release of the new Tamiya 1/48 Ki-61 Tei these sets are timely and welcome temptations to think outside the box! 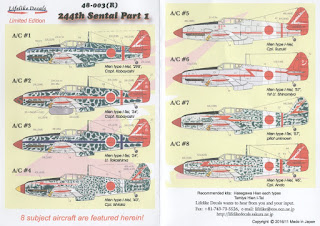 244th Sentai Part 1 48-003(R) contains the markings for no less than three Tei and five Hei variants as follows:-
This set is very comprehensive with alternative markings, such as red and yellow leading edge strips, where these details are uncertain or contested, but it should be noted that it contains sufficient Hinomaru for one aircraft only and the white Homeland Defence bandages must be painted on by the modeller. As usual with Lifelike there are detailed notes for each subject, generic notes on the colours and markings of 244th Sentai aircraft, plus additional schematics showing the placement of wheel cover numbers and stencilling, etc. 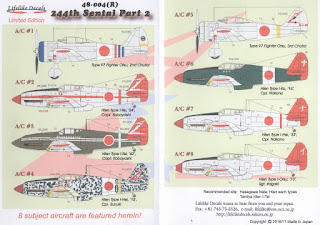 244th Sentai Part 2 48-004(R) offers markings for two Type 97 (Ki-27 'Nate'), a Ki-61-I Ko, an Otsu, two Hei and two Tei.
Another set of interesting markings options with the Type 97 subjects providing an opportunity to model some of the aircraft operated by this famous unit in chronological sequence. 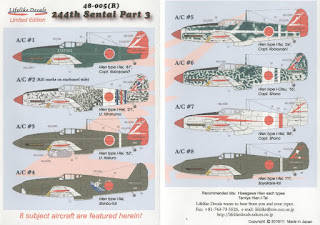 244th Sentai Part 3 48-005(R) presents markings for five Ki-61-I Tei, two Hei and one Otsu.
Another interesting collection of subjects with options for several differently painted Tei requiring interpretative choices. From these three sets all Sentai Commander Kobayashi's various aircraft can be modelled. Of interest is the suggestion to paint the interiors a light blue colour close to FS*5550. This is based on an article by Mr Katabuchi in Gakken 61 which states that Kawasaki painted the interiors of the Ki-61 in Army colour # 1 grey-green (hairyokushoku) which over time became brownish with the appearance of a khaki tan or sand brown. Gakken 61 contains a printed colour chart and the chip for # 1 is shown as a pale blue like FS*5550. The idea that Kawasaki applied a more blueish-grey version of # 1 has arisen before,  reinforced by some extant paint samples. 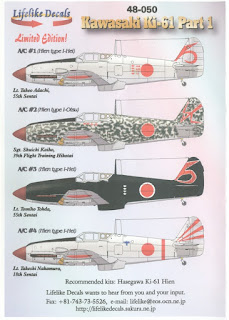 Kawasaki Ki-61 Part 1 48-050 contains markings for three Hei and one Otsu type Hien, all of which display kill marks.
The two 55th Sentai aircraft are from the stay-behind cadre in Japan which participated in Homeland Defence operations led by Lt Tohda whilst the rest of the unit was serving in the Philippines. Again the instructions include notes for each subject, a coloured schematic showing stencilling placement and this time sufficient Hinomaru for two models. The decals are sharply printed by Microscale for Lifelike with good colour saturation.

With special thanks to Lifelike for the review sheets.

Thanks for posting this, Nick. I have actually used some of these decals on my current Ki-61 Hei project, and they are very high quality decals. Normally I like to use the Gunze decal solutions, they were a little hot for these but nothing catastrophic.

Just received the brand new sheet with my Tamiya Ki-61, will be tempted to use the tail markings on the new kit!

So many lovely paint schemes! Would be a waste to just use them for one build. One can only hope Tamiya might do the Ko (preferably first), Otsu or Hei. They definitely should, as their Tei looks absolutly fabulous (having not seen a detail analysis yet).