Dan Salamone has kindly contributed his in-box review of the new Tamiya 1/48 scale Kawasaki Ki-61-I Tei kit. Over to Dan:

"Today I received my copy of the brand new Tamiya 1/48 Ki-61-I Tei. Though I was surprised when I heard a few months back that Tamiya was going to release this kit, it was welcome news. I have been nearing completion of the Hasegawa 1/48 Ki-61-I Hei kit, released back in 2005, so this review will not only report on aspects of the new Tamiya kit, but also offer some comparisons to the older Hasegawa kit. 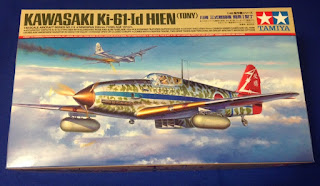 "The box art is truly stunning, showing the subject on an intercept mission against USAAF B-29’s. Though there are not a great number of parts to this kit, you will find that the box is full. Tamiya has included an informational “background” sheet in Japanese, English, German and French, a sheet showing both of the two provided markings options to 1/48 scale and the traditional Tamiya style instruction sheet. 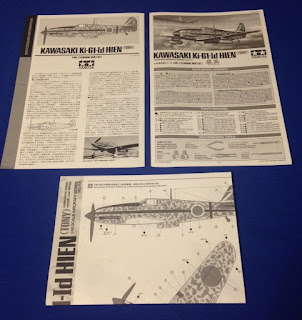 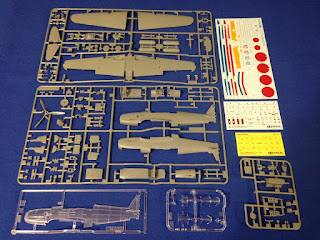 "There is a set of kabuki tape canopy masks included but they must be cut out, rather than the Eduard style of laser cut masks. The aforementioned markings include the aircraft on the boxart, a 244th Sentai machine flown by 2nd Lt. Shunzo Takashima, as well as the aircraft flown by 244th Sentai leader Teruhiko Kobayashi. I will mention here that the Tei variant of the Hien has fewer color and markings options than the earlier Ko, Otsu and Hei variants. If a modeler wishes to model something other than a 244th Sentai aircraft, your main verifiable choices would include the 19th, 55th, 56th, and 59th Sentai, as well as the Akeno and Hitachi Flying Schools. 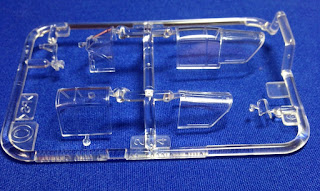 "The kit consists of 5 sprues, 3 in grey and 2 in clear, including a clear left fuselage half as an option instead of using the standard grey fuselage half. This would help to show off the full engine and cockpit detail provided in the kit. The surface detail is fine and beautiful, the engine detail is more than sufficient for most modelers, and the cockpit and other interior parts are comprehensive. The trailing edge of the wings are almost razor thin, so this should result in a very accurate looking scale thickness. 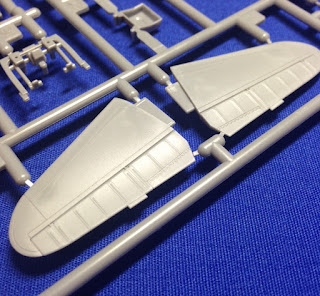 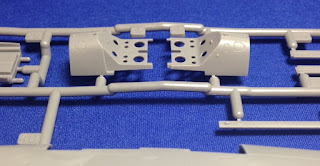 "Fabric flight control surfaces (ailerons, elevators, rudder) show some raised rib tapes which are visible but not highly prominent. Some builders may wish to sand these down a bit. Build options for the modeler include an open or closed canopy, which requires a different set of parts for the spine immediately behind the cockpit, as well as interior cockpit rail parts. The instructions make it very clear which parts are to be used for either option. There is also a very well molded sitting pilot figure. Additionally, and this is not illustrated in the instructions, the full engine does not need to be installed. Instead it can be replaced with part A43, which provides the stem required to attach the prop and spinner assembly. 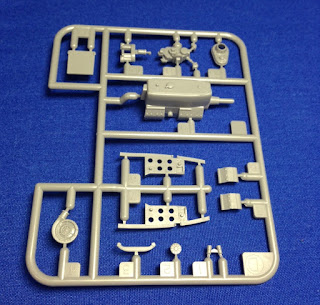 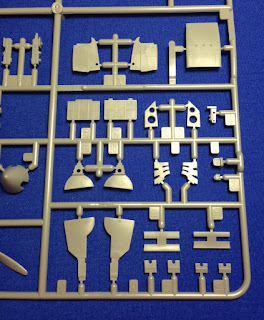 "The parts breakdown for the under fuselage radiator bath is very different from the older Hasegawa kit, as well as the way in which the assembly is attached to the model. Whilst there is far more detail, Tamiya have molded the parts in a way that precludes displaying the radiator bath outlet door in the lowered position. This can be altered by the modeler, but be sure to check reference photos as some late war Hiens had this outlet door removed in the field. There is a set of lap belts included as decals. To the best of my knowledge, the Ki-61 lacked any sort of shoulder harness for the pilot. 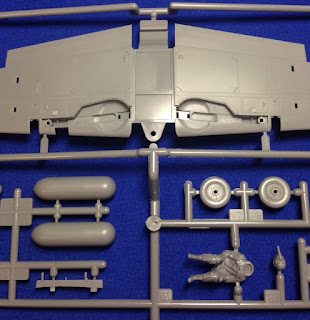 "Some of the weaknesses of the older Hasegawa kit have been addressed and improved upon in this new tool kit from Tamiya. The level of cockpit detail is far superior in the new kit, the wing dihedral appears to be correct, the supercharger intake shows the appropriate vertical slats (whereas the Hasegawa kit is simply an open rectangular shape). The open canopy option is an improvement, especially with the highly detailed cockpit. Personally, one aspect of the Hasegawa kits that always got under my skin was how shallow the main landing gear bays were. Though hard to see in the image above, the bays are deeper and more realistic in appearance in the new Tamiya kit. Other small items to note are the separately molded rudder actuators, landing light lens for the left wing leading edge, and optional pilot head/shoulder armor for the cockpit.


"In summation, this kit is a true gem, superior in all respects to the older Hasegawa kits. That said, until Tamiya releases the short nosed Ko/Otsu/Hei versions, don't sell off your older Hasegawa kits. Hopefully this release signals the return of Tamiya to 1/48 Japanese aircraft subjects . . . . and maybe an equally well executed Hayabusa!"

With special thanks to Dan for sharing this review. The box art is puzzling as Kobayashi presented '24' to Lt Takashima after the 244th Sentai began operating the Ki-100 from 23 April 1945 and the unit had been assigned to the 30th Fighter Group (for direct special attack escort) as a result of operational changes made in March 1945. Takashima was the leader of the special attack 159th Shinbu-tai formed from within the 244th on 26 April. '24' was photographed in early May with its armament removed. On 28 May Takashima flew to Chiran from Chofu in this aircraft, escorted by Lt Koutaro Yokote of the 244th's Sentai Hombu in a Ki-100. Takashima subsequently flew '24' on a one-way suicide mission from Chiran on 6 June.  It seems improbable that Takashima would have been in combat against B-29s in this aircraft. Perhaps the artist intended to depict Kobayashi in '24' with its traditional blue fuselage stripe? The instructions and decal sheet are at odds with this, presenting Kobayashi's aircraft with a red fuselage stripe, as suggested in 2004 by Takashi Sakurai, the historian of the 244th Sentai. In fact the idea of a red fuselage stripe on Kobayashi's '24' is not new as artist Kihachiro Ueda had already illustrated it that way circa 1972 for the box art of the Revell 1/32 kit (shown below) with aircraft sporting blue and yellow stripes in the background! 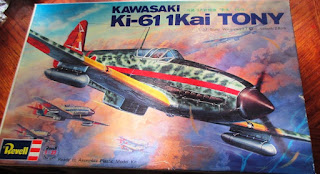 Of course the provision of both blue and red stripes on the decal sheet leaves modellers free to make their own choice when modelling Kobayashi's famous '24'.

Thanks for the review. "...and maybe an equally well executed Hayabusa!"
Yes, I hope so too.
Regards/Stefan Sjöberg

Thanks to Nick and Dan for posting this. I've just gotten this kit myself along with all 3 Lifelike sheets to put in the ever growing " someday " pile. Thanks also to Dan for clearing up the mystery part that replaces the engine - very unlike Tamiya to leave this out of the instructions.

While I seem to have a stack of Ki 43 kits - both FineMolds and Hasegawa - and I'm currently deep into a Hasegawa Ki 43 -1 project including trying to improve the shape issues- I would love to see Tamiya turn their attention to a Hayabusa . I would even be lured back into 1/32 if they did one in the style of their current P-51 and F-4 U kits . Perhaps it will come to be !

Thanks, Stefan and Richard. The poor shape of the Hasegawa fuselage in the 1/48 kits, along with the odd wingtip/aileron engineering, really puzzle me to this day.

When I saw the new box art I was hopeful Tamiya got the colours right. Sadly, seeing the instructions, they don't and they jumped onto the revisionist bandwagon where a lot of markings for some reason have become red.
I stand with the representation of 4424 as shown in the profiles Nick and I produced for the Osprey Ki-61 & Ki-100 Aces book (with exception of the camouflaged spinner, which on closer analysis turned out to be reflection of the people in the photo!).
On the upside, the kit does allow for the correct markings of 4424 as flown by Kobayashi on the special attack escort mission of 19 March 1945, which is essentially what the box art is showing (except with the fictional addition of a smoking B-29).

Thanks for adding those thoughts, Ronnie. Glad there are people like Nick and yourself who rely on strong research as it helps preserve the history better for all who enjoy the topic.

I have mine, and it is a real beauty!