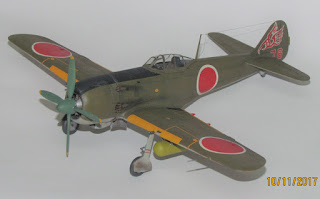 Another fine Hasegawa Ki-84 Hayate 'Frank' in 1/48 scale, this time completed and kindly shared by Shimon Halperin. The model represents an aircraft of 185 Shimbu-tai and Shimon describes the build as straightforward and pleasant.  His main concern was for the colours of the original. 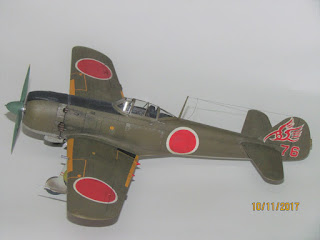 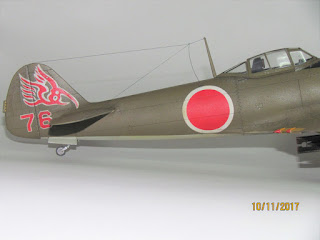 Shimon decided to build this prototype when he saw the Montex masks set, but all his effort to find the source picture brought nothing. The single picture he found on the web was of the tail part only of a different machine (probably the flight leader) of 185 Shimbu-Tai, so there were no clues to colour or weathering. Therefore he decided to build it as a late (but not final) production aircraft with the following features:- 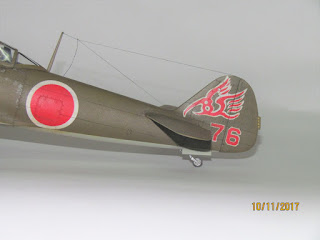 Shimon applied moderate weathering guided by photos of Hayate and painted on most of the stenciling using masks. 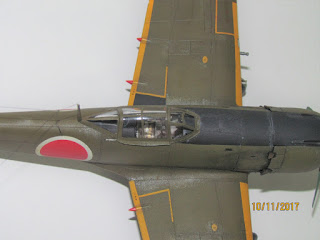 During the project he discovered that the Montex masks for the upper and lower wing hinomaru were under-sized by about 1.5-2mm and would spoil the appearance of the model. So he made his own masks for them and was happy with the result. 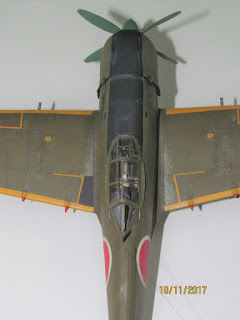 With special thanks to Shimon for sharing these images of his Hayate model.

Very appealing model and thank you for the painting suggestions, Shimon.

Very sadly I've not found either any photographs of the 185th Shinbu-tai. I would be particularly interested in aircraft # 86 with the large Japanese characters on the fuselage. I wonder how the illustrations in books were developed (e.g. in Military Collection 6, Kunitaka Imai 2006, p.66) if no photos seem to exist??

Any help with pictures would be much appreciated.
Michael

Love these markings on the Hayate, very attractive model!

Nice model and finish. For me just about the right amount of weathering. Good job and thanks for posting and thank you Nick for the Ki-84 colour info. Every little bit helps.

Many thanks for the comments! Thanks for Nick for the help during the build!