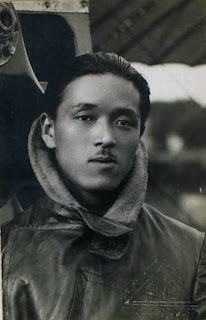 Whilst at least nine Japanese pilots served in the Aéronautique Militaire of the French Army during the First World War, Fusao Ohara, known as Harry O'Hara, served in the British Royal Flying Corps (RFC) and Royal Air Force (RAF). Ohara was born in Tokyo in 1891 but is recorded as running away from home in 1910. At the outbreak of war in 1914 he enlisted in the 34th Sikh Pioneers of the Indian Army, which he reportedly joined when working as a newspaper correspondent in India. On 2 December 1914 he was wounded by shellfire in France whilst serving as a cook, the unit Doctor recording that he was "very plucky and made no complaint though riddled everywhere".  He subsequently joined the 17th (Service) Battalion of the Middlesex Regiment of the British Army, arriving back in France with that unit on 24 December 1915.

He was again badly wounded in action in August 1916 during an attack at Guillemot and awarded the Military Medal in January 1917. On leaving the Edmonton Military Hospital and transferring into the RFC he was recorded as having scars from almost 70 shrapnel wounds on his chest, left shoulder and arm, right arm and right thigh. Enlisted as a 2nd Class Air Mechanic he underwent flying training, receiving his wings on 21 July 1917 and promotion to Sergeant. In September 1917 he married Muriel McDonald from Norfolk in a ceremony at Lewisham and in March 1918 he was posted to the School of Military Aeronautics at Reading.

Harry Ohara was then posted to No.1 Sqn RFC in France but in June 1918 he was again wounded, this time requiring facial reconstruction surgery at the Queen's Hospital in Sidcup after initial medical treatment at Boulogne.  After his discharge in April 1919 he was awarded a pension and lived with Muriel in Islington, London. He worked at St Dunstan's school for the blind finishing the furniture made there with lacquer work and he also taught Japanese at the School of Oriental and Asian Studies (SOAS). His daughter Geraldine recorded that he loved and admired England, serving as a fire watcher during the Second World War. He was remembered for his kindness and courtesy, despite being greatly troubled in later years by his war wounds and eventually becoming bed ridden. He died in Hampstead in 1951.

It is an honour to be able to record his service here, albeit so briefly.

What an amazing story Nick, he endured and persisted when most would have crumpled. Thanks for sharing this story.

Merry Christmas and Happy New Year to all here, as well.

What an interesting article. Thank you for posting it!