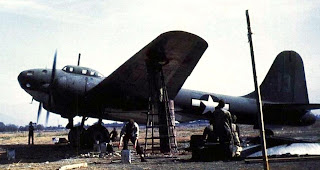 The RAF Flying Review magazine series 'These Were The Enemy' included a number of well known and lesser known Japanese types. No.70 in the series, published in Vol.XV, No.10 in June 1960 featured the Ki-74. The Tachikawa Ki-74 Long-range Reconnaissance Attacker (立川 キ-74 遠距離偵察撃機) is quite well documented on the internet and elsewhere and despite the small number built was assigned the Allied code name 'Patsy'. Its genesis was in a design intended to keep tabs on the Soviets by long-range photo-reconnaissance incursions to the west of Lake Baikal in Siberia. The project was suspended when priority was assigned to the Ki-77 (of which more anon, also courtesy of RAF Flying Review), but resurrected by the Army in a design proposal completed in September 1942. Aspiration was for long range attacks against the United States mainland but the war situation eventually relegated that to an attack against Saipan, although ultimately no operational sorties were conducted as actual production fell far behind that planned. 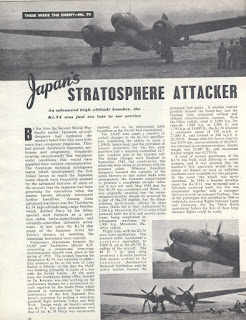 As usual the Flying Review article eschews any chauvinism with the recognition that Japanese aircraft designers "had proven themselves ingenious, ambitious and progressive, frequently creating exceptionally fine warplanes under conditions that would have appalled their western contemporaries". Operationally the Ki-74 should have been finished in the late-war No.7 olive drab colour but a colour photograph (heading image) suggests perhaps a more blueish dark green, similar to # 27 Ao midori iro or the IJN D2 and also to that seen in a colour photograph of a Tachikawa-built Ki-43-III Ko. That might just be due to an overall blue cast and degradation in the slide film or to non-factory painting by the Army. Photographs also suggest only partial painting of the under surfaces. 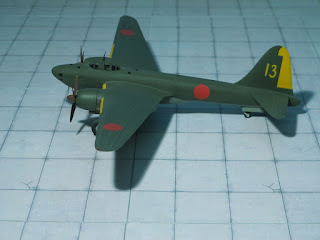 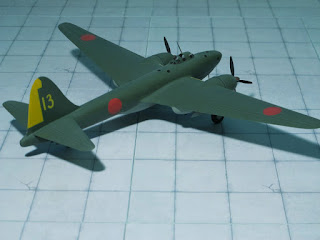 By December 1944 only three pre-production examples had been built against a planned production of 26. By August 1945 a further 12 had been completed against a planned production of 109. Tooling up for two line series production of the Ki-74 was in progress at the Sunegawa section of the Tachikawa plant but a B-29 raid on 17 February 1945 destroyed 40% of the wing and fuselage assembly building causing 30-80% damage to the jigs. On 4 April 1945 a second raid destroyed 20% of the Ki-74 final assembly building. In May 1945 a decision was made to transfer production to a new plant near Kumagaya, but it was never completed. Production was also delayed by a shortage of skilled labour as the Army had prioritised Ki-43-III Ko manufacture for Tachikawa as well as problems in the supply of oleos, oil coolers and electrical parts. 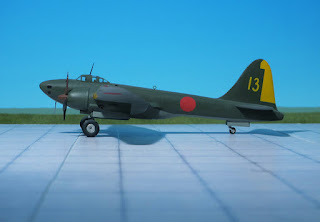 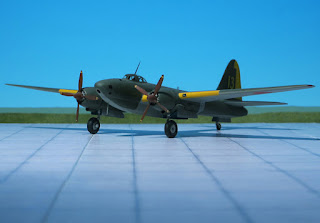 The Ki-74 is an impressive and intriguing aircraft with its B-17 like tail but has not yet attracted the attention of mainstream plastic injection kit manufacturers. A 1/72 resin kit of the type was released by A & V Models in the 1980s and it is a privilege to be able to share images (above and below) of a splendid build of that kit by Gunther Arnold, whose modelling blog ModelPlanes.de is well worth visiting and contains a host of other beautifully built Japanese aircraft models, including a number of experimental types. A complete walkaround of Walther's Ki-74 model may be found at his blog here.  More recently A & W Models has released a resin kit of the Ki-74 in 1/144 scale. 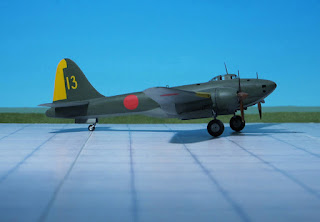 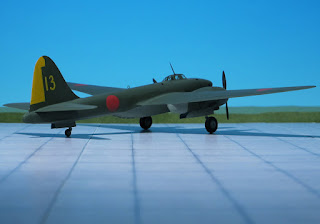 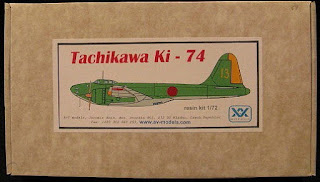 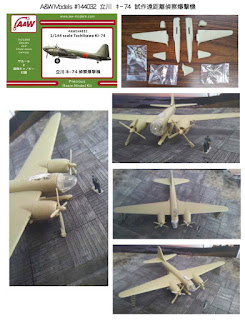 With special thanks to Gunther Arnold for his kind permission to share his model photos here. 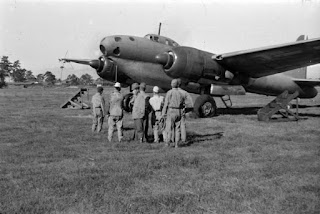 I'm impressed by the superb resin model from Gunther - very rare indeed - and the excellent photography. Interesting article, these RAF review articles should be reprinted in a book volume. Wouldn't that be a project for you, Nick, to find a publisher for it?

I agree with Michael. If you can get the permissions to do it (or are the RAF articles public domain now?), it would make a great and welcome historical reference.

There is a picture of what appears to be a Ki-74, but the cockpit is different from the other images I have seen. the aircraft itself is only partially assembles (or disassembled) with the part or all of the wings missing. It is a B&W photo and the finish of the plane appears to be metallic. Could this be the Ki-74-II? That was planned to have tandem seating for the pilots. I am recalling this from memory so I may not have the details correct, but the metallic appearance and the cockpit being different I am sure of.

Thanks for your comments and suggestions Michael and Wind Swords.

Wind Swords, I know the photo you mean but I'm not sure whether it is the Ki-74-II bomber mock up. FWIW Aireview ('General View of Japanese Miltary Aircraft in the Pacific War' - 1956) with its impressive listing of contributors gives a similar account of the Ki-74 sub-projects to the Flying Review article.

Thanks for sharing this article and the exceptional model! I'll bet that one didn't 'fall together' in a weekend! These vintage articles are always appreciated, thanks Nick.