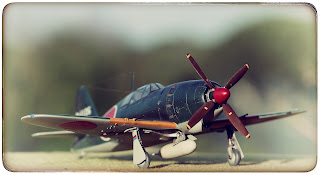 Francesco Borraccino has kindly shared these images of his masterful build of the Hasegawa 1/48 scale Mitsubishi J2M3 Raiden Type 21 kit which he completed painting recently after it had languished, almost built but unpainted, for nearly ten years.  Raiden was designated 海軍 局地 戦闘機 which is usually translated as 'Navy Interceptor Fighter (Aircraft)' but 局地 (kyokuchi) literally means limited or local area. Raiden 雷電 is 'Thunder and Lightning' usually translated as 'Thunderbolt'. Some aircraft seem to look better on the ground than in the air - and vice versa. The Spitfire is an example of the latter, with that knock kneed, narrow gauge undercarriage detracting from the aerodynamic excellence of its lines. But the Raiden is of the former with its powerful 'just about to leap' appearance captured perfectly in Francesco's presentation of an aircraft he describes as a 'true beast'. 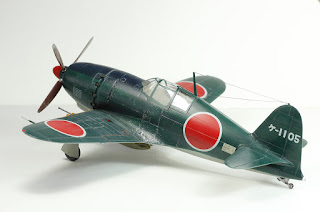 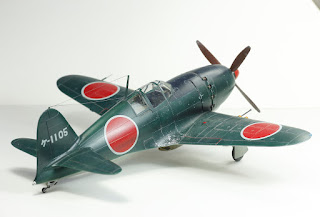 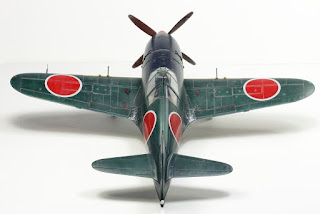 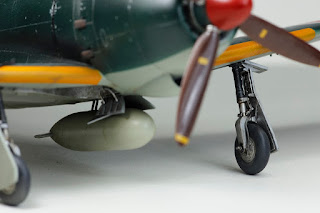 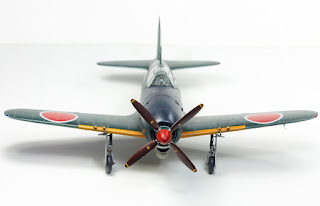 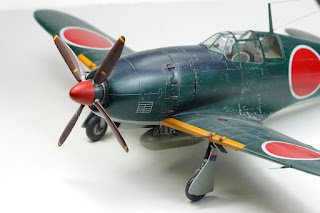 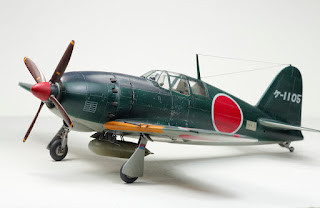 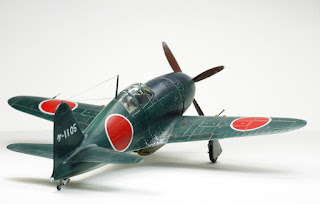 With special thanks to Francesco for sharing these images of his fine looking Raiden model and also to Keishiro Nagao of Lifelike Decals for kindly explaining the aircraft designation in correspondence during 2015.

Image credit: All © 2019 Francesco Borracino
Posted by Straggler 脱走兵 at 19:12

Bravo Franceso, this is an excellent build. The first picture looks just great.
Thanks for showing us Nick.

Great build and pictures, it does indeed capture the lines and character of the type very well. I also like the subtle paint chipping and weathering. Thanks for sharing your work, Francesco.

Beautiful! The green colour is something beautiful, apart from the excellent build techniques.

I love this model, Francesco, beautifully rendered! Thanks for bringing it to us Nick.

I am building the old Tamiya J2M3 and have struggled with the undersides colour. I have the full line of AK Real Color Japanese paints(IJN and IJA) and was planning D2 topsides, painted on hinomarus, but the undersides have me stumped as I'm torn (probably too harsh a word) between J3 Hai-iro or J3 Amber Grey. Also, would the inner gear bay and gear doors follow the same Mitsubishi pattern as being the same as the undersides colour? TIA

Please refer to the Key Data Guide 'Raiden Colour Notes', still available - see sidebar under 'Aviation of Japan Resources for Modellers'. It will provide you with all the information you need. Regards
Nick