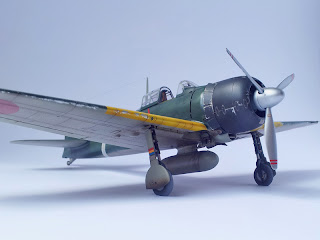 Alvaro César very kindly sent these images of his superlative build of the Tamiya 1/48th scale Mitsubishi A6M3 Model 22 Zero in the markings of the 582nd Kokutai based at Buin on Bougainville. 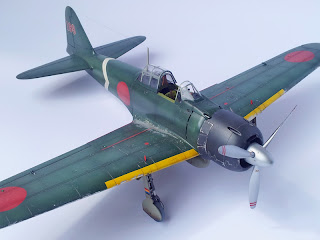 Alvaro found the level of detail and fit of the kit parts amazing. There was almost no need for putty and some parts held well even without glue, as for example the ailerons, the U-shaped wheel well mechanisms, cowl flaps and landing gear legs. The only unexpected trouble was the junction between the lower rear part of the wings assembly and the underside fuselage that required some work to align. 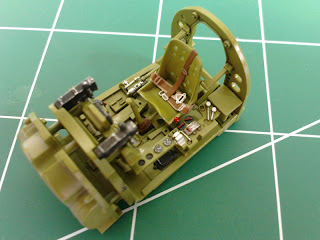 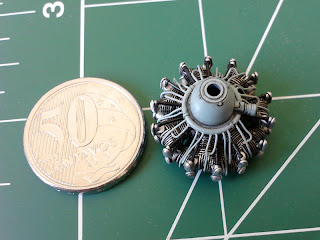 The model was painted using Gunze (GSI Creos) acrylic paints with Vallejo chrome paint for the chipping effects. The yellow wing IFF strips and Hinomaru were masked and painted. The numbers and the white chevron are from the Berna Decals A6M3 Set with their borders trimmed. On completion the kit was coated with a 50/50 mix of Gunze clear gloss (H-30) and flat (H-20) to produce a semi-gloss finish. 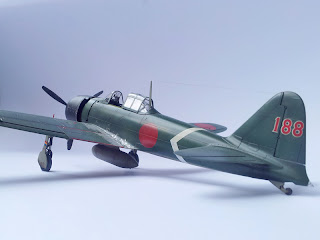 After a sludge wash, Tamiya Weathering Master Sets were used to add some subtle weathering and oil/exhaust stains. 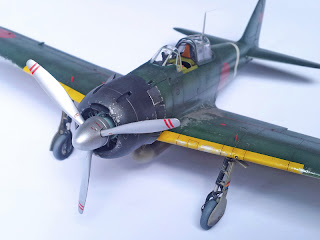 All in all Alvaro found the Tamiya A6M3 to be a very well-engineered and enjoyable model kit which he recommends to modelers of all skills.

For smaller scale modellers the impending release in September of a new mould Tamiya 1/72nd scale A6M3 Model 32 "Hamp" (above) suggests that a Model 22 in the smaller scale might follow. The previous Tamiya 1/72 "Hamp" dates to circa 1964 so the new kit appears on its 50th Anniversary. The old and new kits will make an interesting comparison. 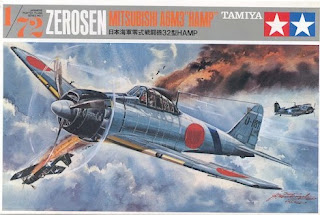 Very nice work, Alvaro. Thanks for sharing it with us.

Fantastic, Alvaro! Nice to see this one done so well. That's two superb builds of this kit on this blog in the past few months.

Hope it's about time for Tamiya's new-tool A6M2 now...