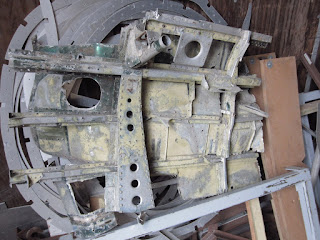 Way back in June 2008 a schematic of colours from reported values for  Zero interior colours was blogged here and one of those, a rather unusual brush painted light tan hue seen in the cockpits of two A6M3 aircraft, a Model 32 and 22, had been measured by Robert C Mikesh as Munsell 3.2 Y 7.6/3.5, the closest FS equivalent being 33578. This colour is identified as N38 in his 'Japanese Aircraft Interiors 1940-1945' (Monogram Aviation Publications 2000). Ichiro Hasegawa had also reported a matt yellow, similar to this colour, as being seen in the cockpit of an A6M2 aircraft.

Now Ryan Toews has very kindly shared valuable additional information and photographs from his own recent observations about this unusual colour to suggest that it is anomalous. Ryan  has commented as follows:-

"Last September 23rd (2019) I spent the day at Legend Flyers in Everett WA. My primary purpose was to check the progress of their reconstruction of A6M3 Model 32 c/n 3148, but I found  in their collection of artifacts what I identified as most likely to be parts of two separate A6M3 Model 22 forward fuselage sections. (Images 01 [heading photo] and 02). Note, though, that these artifacts could also be from late Type 32s or very early Type 52s. 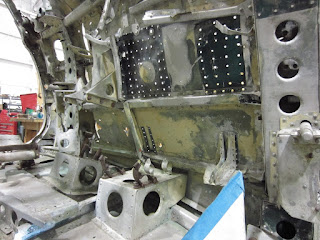 Image 02
"What was interesting was the “light tan” coloured cockpit interior paint on both cockpit sidewalls. I thought immediately of your 2008 description of this colour. However, when this paint was buffed down it revealed that the light tan colouration was actually a result of paint oxidation. (Images 03 and 04 – note that both of these images are from components found on the cockpit seen in Image 02) The paint in fact was a mid-green shade. I suspect that in better light and some additional removal of the oxidized paint the colour would fall into the same shade of green found on other Mitsubishi Zero interiors. 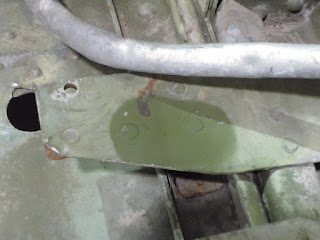 "I suspect Mikesh’s earlier observations on this paint did not include him buffing down the surface. The existence of this light tan shade in at least two different cockpits would seem to indicate the degradation of the original paint is not uncommon, but the original shade was actually consistent with Mitsubishi’s usage of a darker green interior paint." The official IJN cockpit interior colour was the greyish green M0/M1 and it now seems probable that most recorded variations in hue from this colour standard are due to manufacturer batch differences, photo-chemical colour shifts or age-related degredation of the exposed or protected paint strata (and not easy to determine which is which!). A yellowing or browning of the paint binder would shift the hue towards more olive green and paint surfaces protected from exposure to UV light could be expected to darken. The vehicle in the wartime paint was not very stable, but inconsistently so, and although the rate of colour shift cannot be determined Ichiro Hasegawa's observation suggests that it could have been quite rapid, at least in terms of the duration of the war. However, in general terms, the Tamiya XF-71 Cockpit Green colour intended for IJN aircraft is a tad too green compared to the M0/M1 standard which is around Munsell 7.5 GY 5/2 and/or FS 24226 in appearance.

With special thanks to Ryan for sharing his revelatory observations and photos. The original June 2008 blog will be amended to link to this one.

Thanks Ryan & Nick, for taking time & effort to post this update.

Thanks for sharing.
It's looks like the point of view for "yellow interior" has died.
I wonder what about "buff color" for the Shiden-KAI's interior.

Another good work, thanks to Ryan for it and Nick for sharing.
So we are left with one colour each for the Nakajima and Mitsubishi built aircraft ?

Thanks so much for this post and clearing this up.

Hey Ryan, this is Dan, I was working their the day you visited (the younger fellow that chatted with you for awhile, a great time) I've personally taken over 800 photos of the project. I enjoyed meeting you, great to see that you're so involved in keeping the history alive.