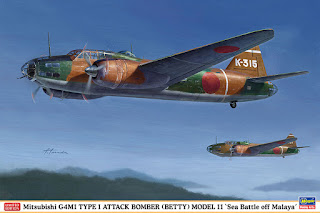 Hat tip to Aviation of Japan's Texas correspondent Mark Smith for kindly alerting to the re-release of the venerable Hasegawa Mitsubishi G4M1 'Betty' in 1/72 scale. This time Betty is dressed for the 'Sea Battle off Malaya' in green and brown, with markings options for three aircraft of the Kanoya Ku, the unit which sank the Royal Navy's battleship HMS Prince of Wales and battlecruiser HMS Repulse on 10 December 1941, off Kuantan on the east coast of Malaya.  They are 2nd Chutai K-315 or K-357 and 3rd Chutai K-338. The G4M 'Betty' was officially the Type 1 Land-based Attack Aircraft  (一式陸上攻撃機 - Ichi Shiki Rikujoh Kohgeki-ki) often abbreviated as Type  1 Rikko (一式陸攻 - Ichi Shiki Rikko). Betty's subsequent misfortunes have somewhat overshadowed the startling success of its torpedo attacks on the two British capital ships. 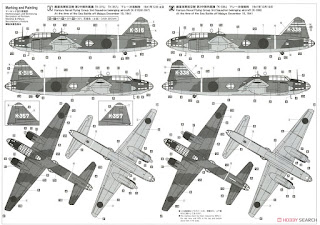 The splendid new box art appears to follow the convention of Kariki 117 colour standards D2 and H2 for the two-tone green and brown camouflage over natural metal, but the issue of IJN browns was tentatively explored here in no less than five parts (!) during June 2008, with contemporary artwork of a Kanoya Ku Type 1 Rikko over HMS Prince of Wales, courtesy of the late Jim Lansdale, subsequently posted here. The current Hasegawa instructions suggest Gunze Mr Color 124 Dark Green (Mitsubishi) for the green, but a Mr Color mix for the brown of 40% 7 Brown + 30% 4 Yellow + 30% 6 Green.  I haven't tried this yet but presume it results in a colour approximating the box art, perhaps just a little more 'earthy'. It is the same mix suggested in the 2007 release 'Repulse Attack' which offered markings for no less than seven Kanoya Ku aircraft, including K-310 flown by the 3rd Chutai leader Lt Haruki Iki and as shown below on a Hasegawa promotional model.

The Hasegawa kit was released in 1969 as JS-24/450 in its 'King Size' series so exceeds the half century in vintage, first appearing in chunky dark green plastic with lots of rivets and a small tube of glue precariously included in the bag with the transparencies. The markings provided were for two green over grey schemes - aircraft '336' (s/n 5749) of 705 Ku at Rabaul in June 1943 and aircraft '01' of 761 Ku during that unit's establishment training at Kanoya, Japan from July 1943. Originally designated Ryu-Butai (Dragon Unit - 龍部隊) 761 Ku continued to display the character 'Ryu' (龍) for dragon on the tail fin  Since then the kit has been re-released 17 times in various different boxes and guises, including releases by AMT and Minicraft in the USA and Hales in the UK. It was planned to be released in the UK by Frog in 1969 as kit F284*, but that never happened and Hales imported the kit into the UK in 1972, adding their sticker to the then current box which featured the second version of box art with 'Jinrai' markings and the Ohka included in the kit. More Hasegawa Betty 'kitography' in due course. The interior was simplified with a cockpit floor, control sticks, three seats, three identical crew figures and an instrument panel. The finished model conveyed the look of the aircraft reasonably well as photos of it attest. Perusal of the latest instructions indicates no changes to the basic moulding which would benefit greatly from some aftermarket replacement cowlings (hint)! But as well as that promotional model above a photo of Owen Veal's model here, built straight from the kit and painted with Humbrol Authentics, shows how good it can look.

I am very surprised that Hasegawa didn't revisit this a/c when they were releasting "twins" not too many years back.

Thanks for your comment. They did release a new tool G4M2 in 1996 and seem to believe the G4M1 kit is good enough for continuous re-release so perhaps their thinking was to have both versions in the range rather than just re-tooling the existing one?

Thanks Nick! I was not aware the G4M2 was a new tool, I'll have to have my eye out for that one.

Again, thanks for your posts, and keeping me/us aware.

Thanks for researching this data, Nick.