With the announcement of a new Airfix Nakajima B5N2 'Kate' in 1/72nd scale the 41 years old 'only game in town' is finally going to face impressive competition. The original and respectable Mania kit of the type is still going strong thanks to a programme of regular re-release by the owners of the original moulds, Hasegawa. The Airfix decision to release a new kit is therefore imaginative and bold. As a carrier borne aircraft capable of long range reconnaissance, high level bombing and torpedo attacks it is an important historical type and although usually associated with Pearl Harbor it was in operation over China from 1938 when Britain's Fleet Air Arm was still dependent on the biplane Swordfish. 'Kate' will make an interesting comparison to that Fairey torpedo bomber, also recently kitted in new form by Airfix. 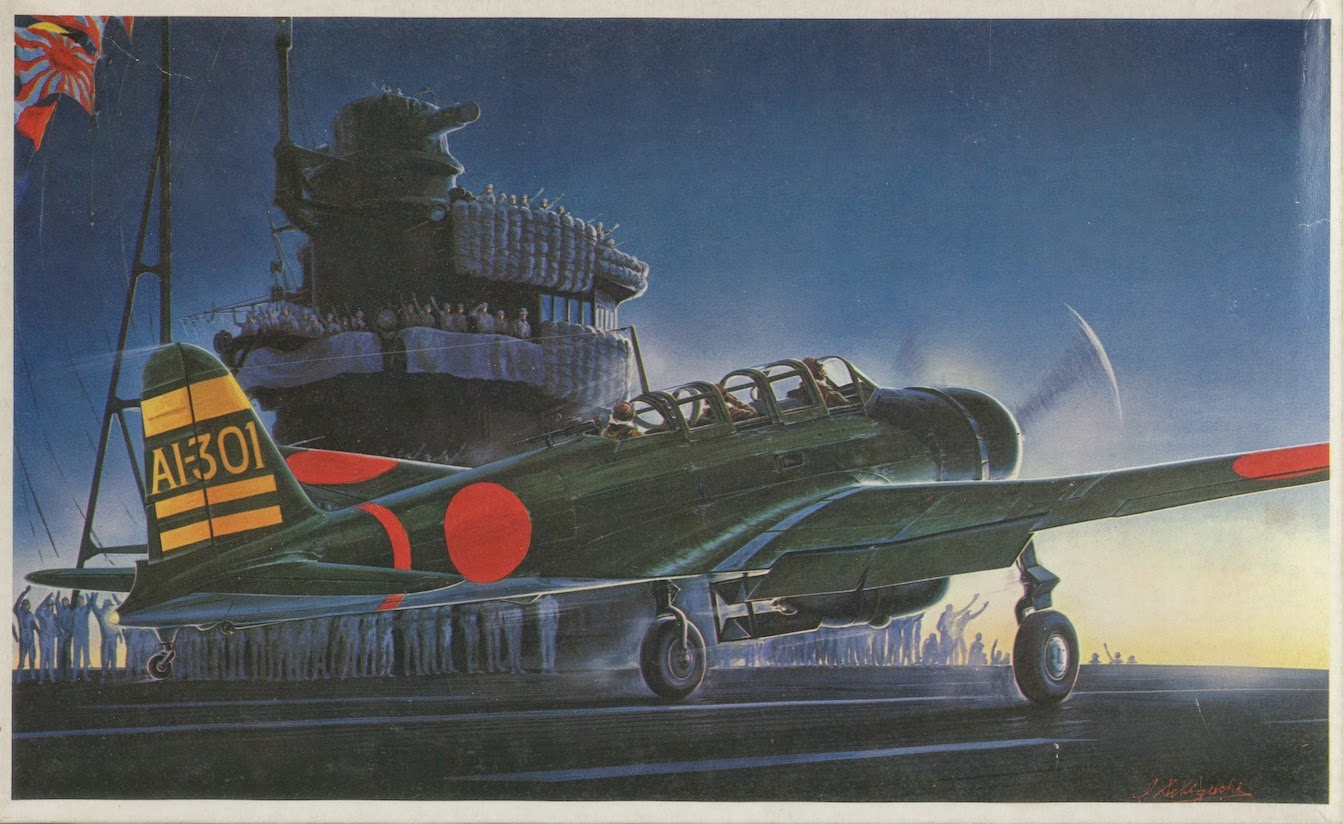 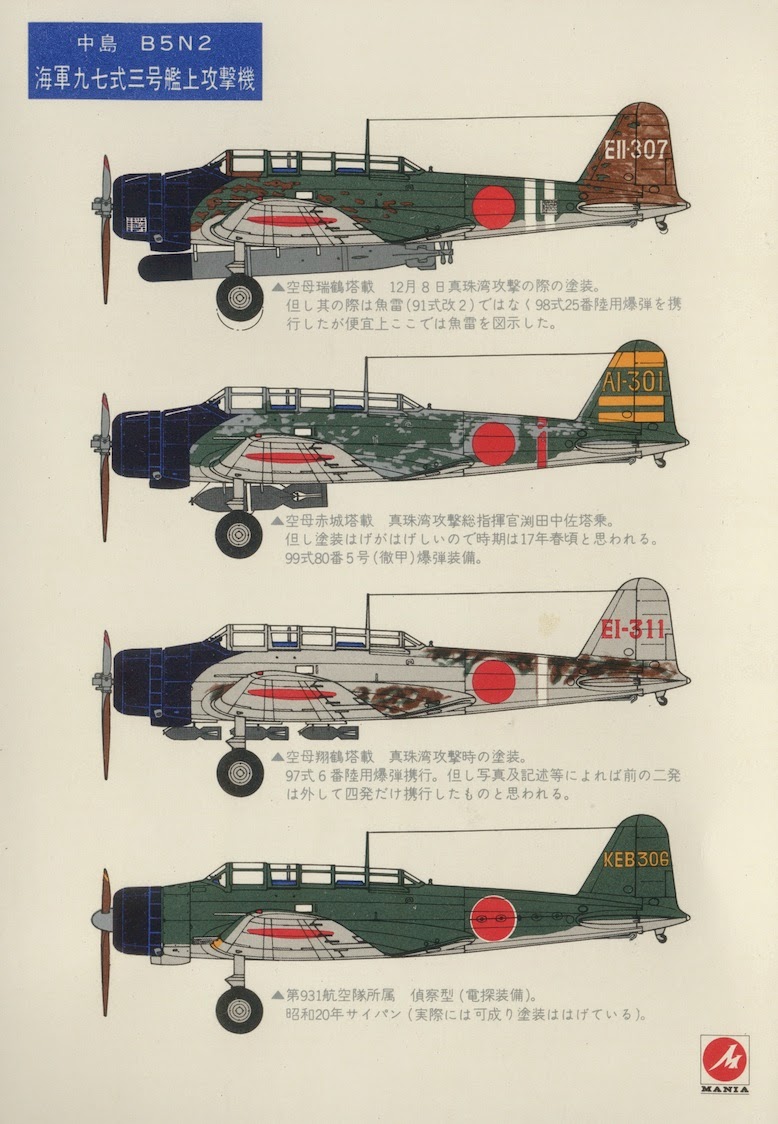 The Mania kit of the 'Kate' first appeared as the B5N2 in a single boxing from 1973, three years after their first kit of the Nakajima Ki-27 'Nate'. The kit featured the new standard of engineering pioneered by Mania with fine engraved panel lines and surface detail together with a comprehensively furnished interior. Four markings options were included, three Pearl Harbor era aircraft, EII-307 off Zuikaku, Cdr Mitsuo Fuchida's AI-301 off Akagi , EI-311 off Shokaku and the radar equipped KEB 306 of the 931st Kokutai later in the war, together with a card of colour profiles and monochrome schematics of the upper surfaces. KEB 306 should have been depicted with a diagonal red band on the fin and rudder with drift sight markings on the tailplanes. Oddly, although two of the options were for bomb-carrying Kates, only torpedo armament was included in the kit. The brown tail of EII-307 was to become the focus of heated controversy in later years. 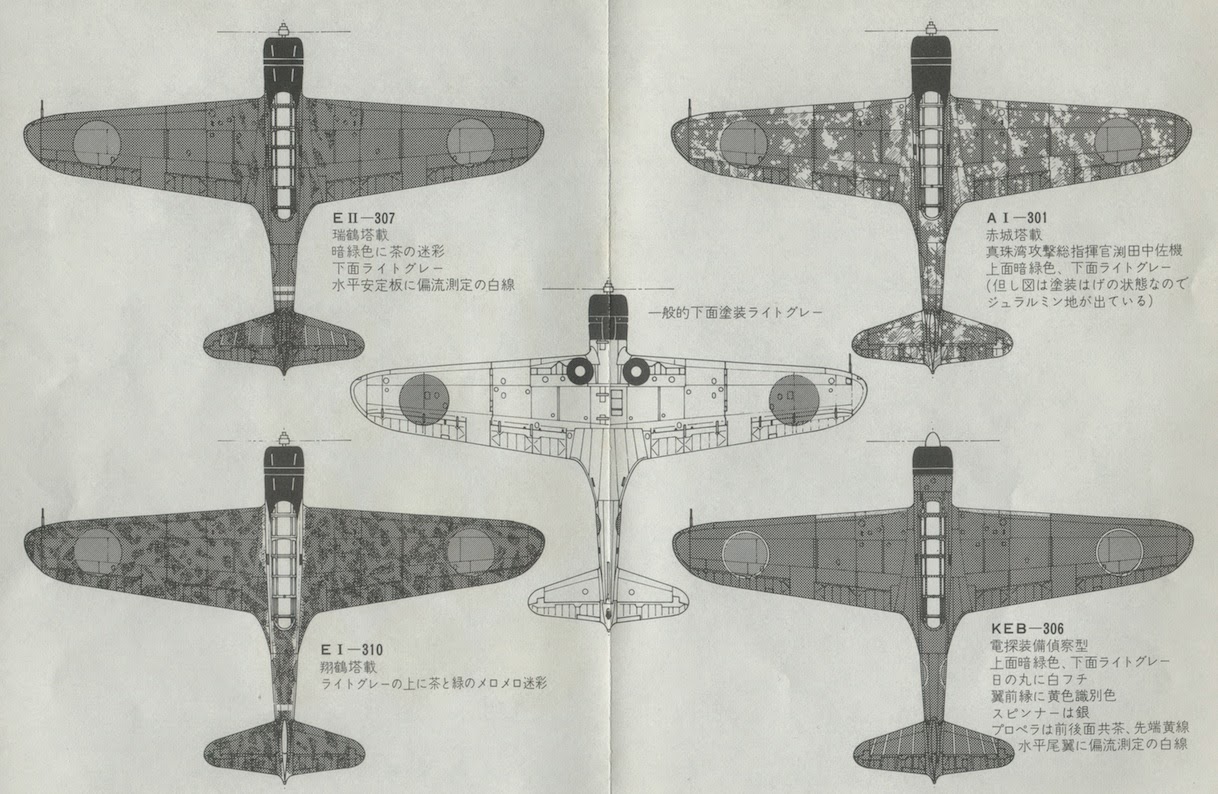 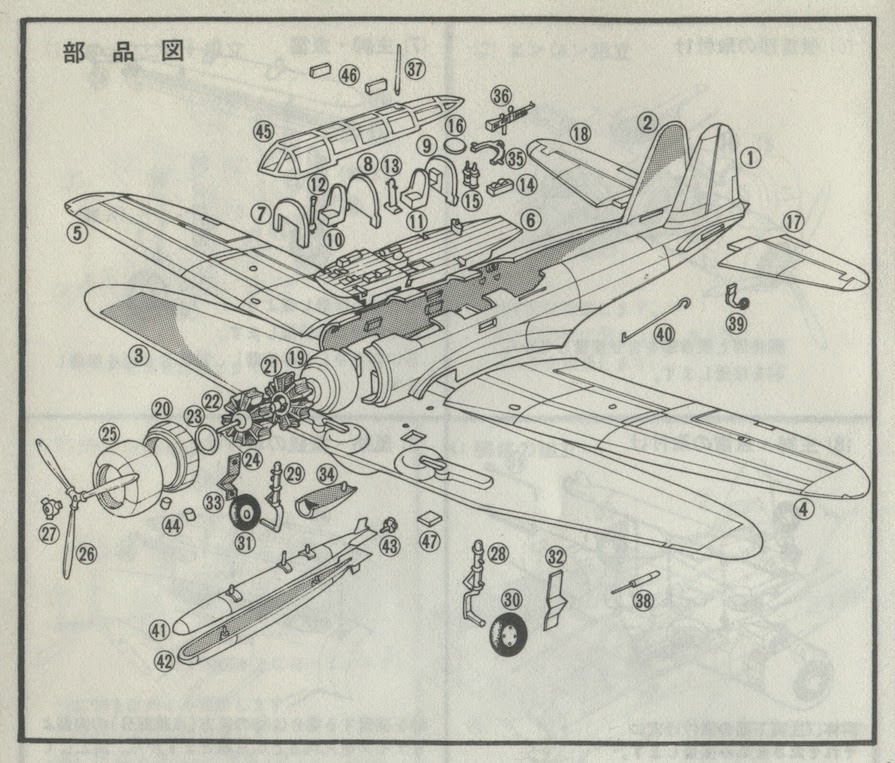 Breakdown of kit parts for the Mania Kate - the extent of interior detail was revolutionary for 1973!

The fuselage of the Mania kit has been reported as being too short in length but on checking the kit parts against the 1/72nd scale plans in the Bunrin-do Famous Airplanes of the World (FAOW) # 32 of 1982 the difference appears marginal, barely 1 mm in the position of the fin and rudder. However the canopy on the Mania/Hasegawa kit does appear a little shallow in profile. 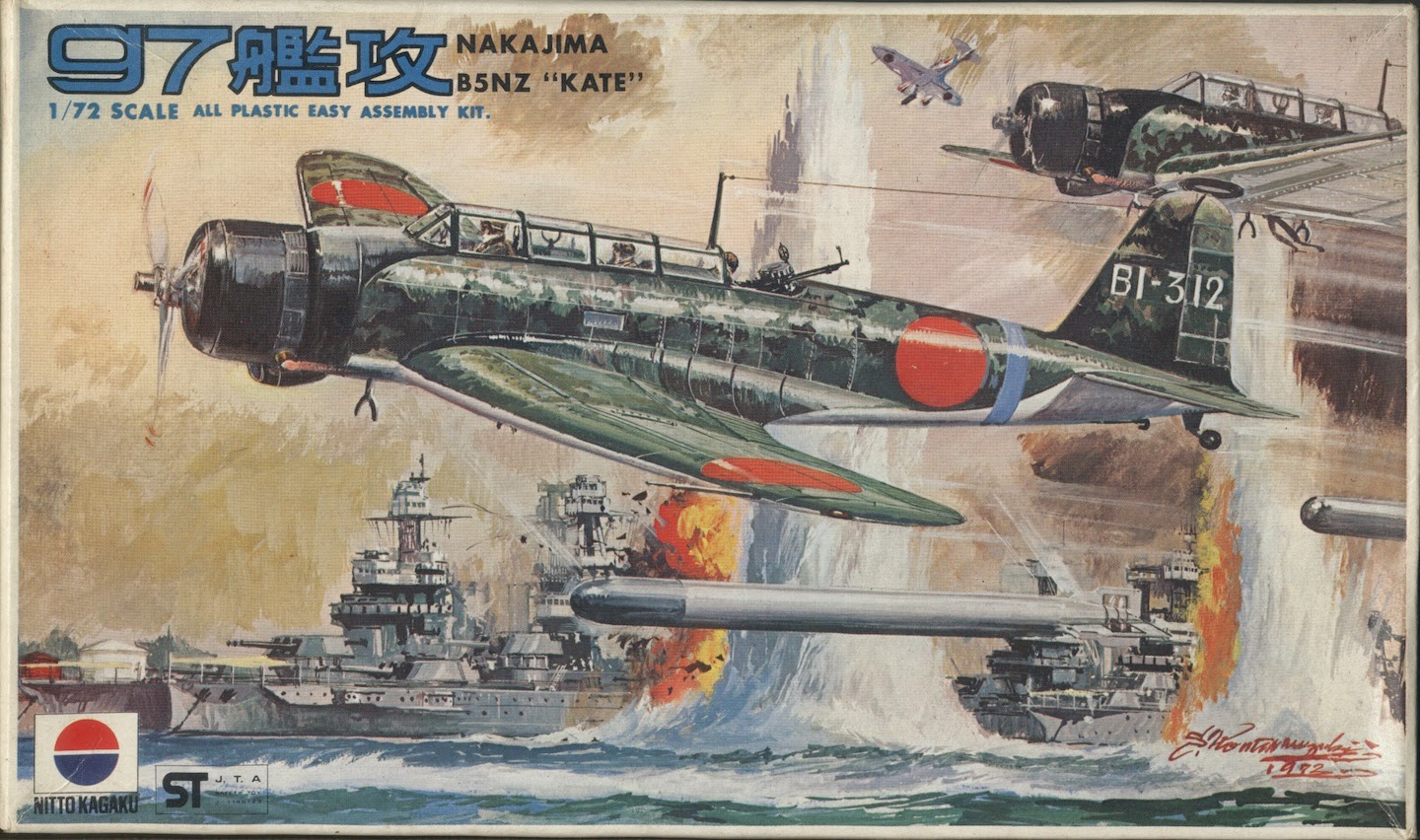 At the time of Mania's B5N2 release the only previous kit of the type in comparable scale was by Nitto Kagaku from 1968 which was originally marketed as being to 1/75th scale. The surface detail is reminiscent of early LS kits with prominent engraved panel lines combined with heavy rivets. The kit featured rather crudely working folding wings and in my own second issue (?) example, labelled as being to 1/72nd scale, with 1972 box art by S Komatsuzaki there are three markings options for tail codes KEB-306, A-301 and EII-308, although curiously not B1-312 featured in the art. Interior detail is restricted to three identical crewmen sitting in tandem astride a pole supported in the usual way on fuselage pegs. It is now a relatively rare kit and not easy to find. 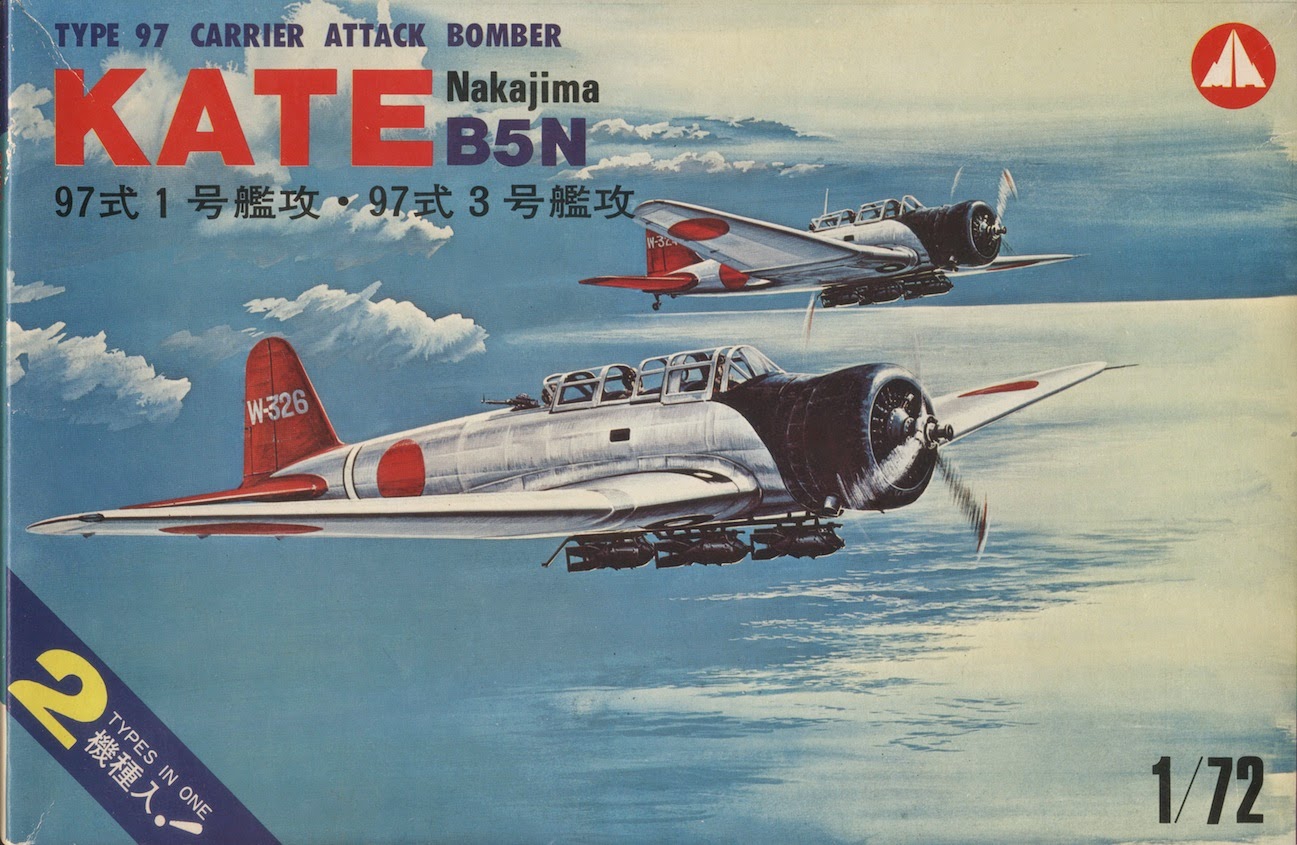 In 1975 the Mania 'Kate' was re-issued as 02-800 with two kits in the box with a sprue frame providing the engine and bulged cowling parts for the B5N1 variant together with multiple bomb racks and bombs in addition to the torpedo armament. Most boxes included one kit moulded in silver plastic and one moulded in light grey. 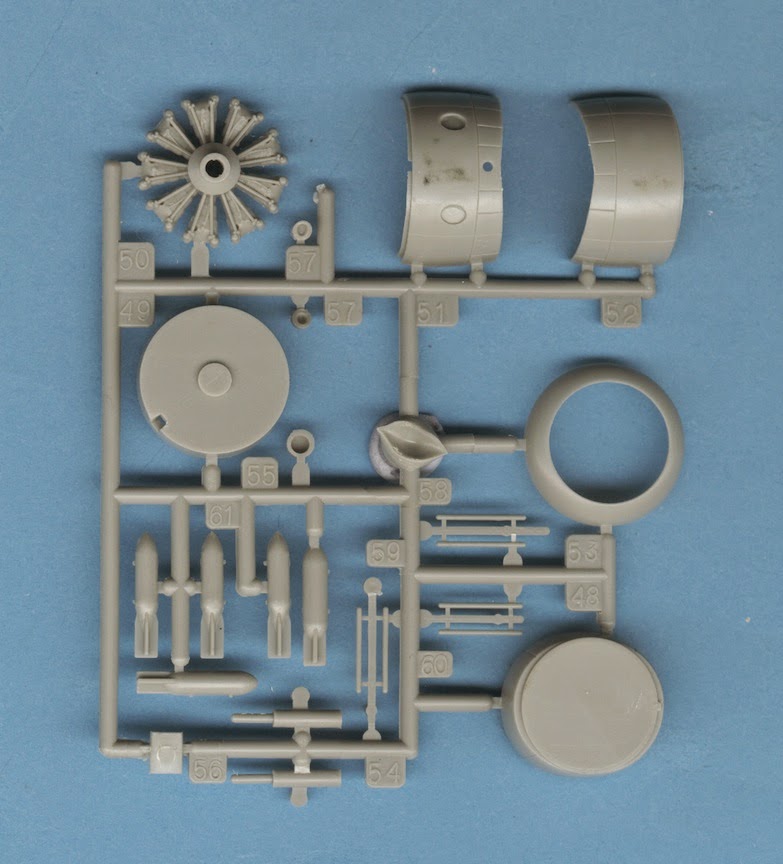 This double kit included markings for a B5N1 W-326 off the Soryu during the China campaign as depicted on the superb box art together with three examples of the B5N2: KEB 306 again, AII-306 off Kaga and Fuchida's AI-301. The glossy paper instruction sheet reproduced the box art and included colour profiles of the markings options in a high quality presentation. 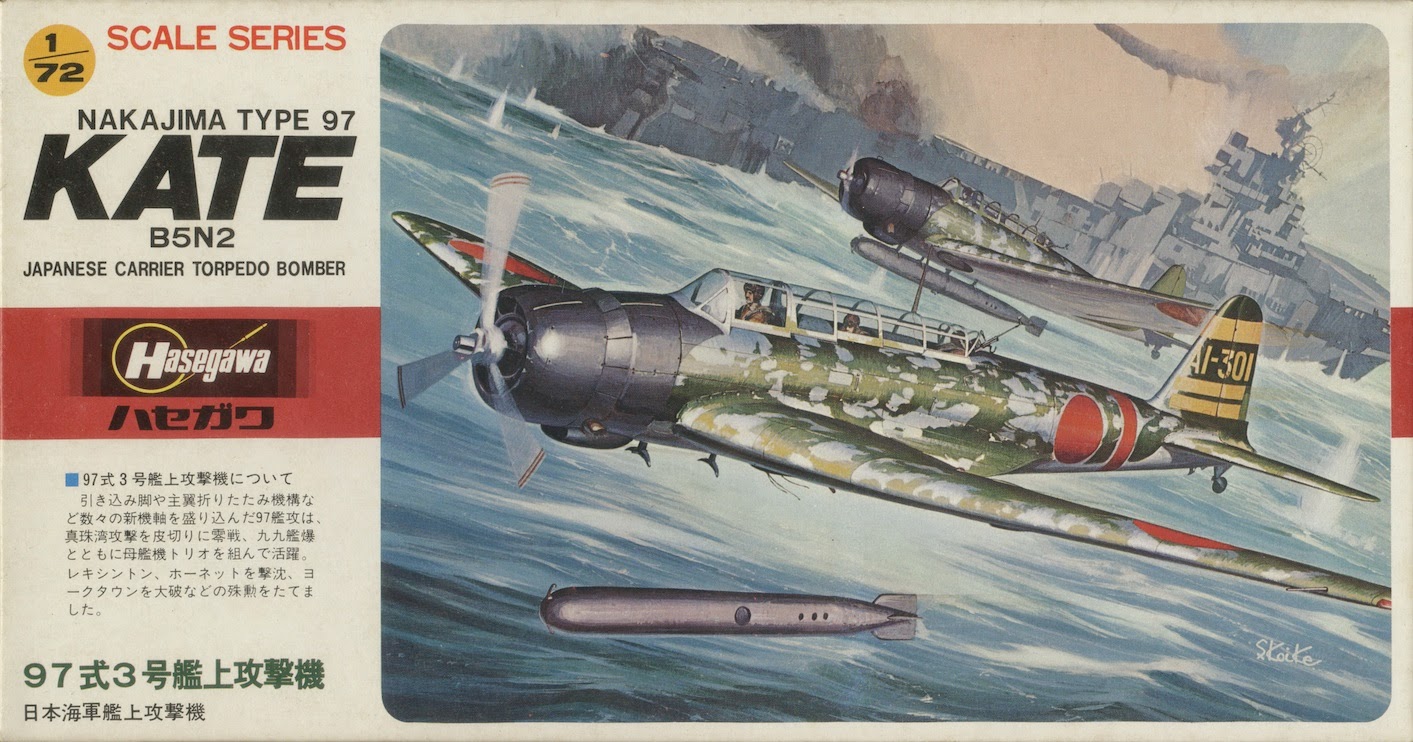 Hasegawa took Mania over in 1977 and quickly released the kit under their own logo in B5N2 guise with early Shigeo Koike box art as # A32 in their 'Red' series in 1978. Two markings options were offered in the kit, both torpedo carriers, with tail codes A1-301 and AII-306. It was typically moulded in silver coloured plastic. The kit was re-issued with identical box art as # B4 in the 'Blue' series from 1982 to 1987. Two previous issues are reported in Burns* although I have not seen the boxes - JS-129 in 1980 and B004 in 1981. 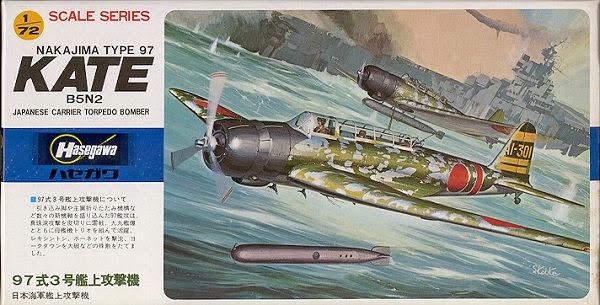 In 1989 the kit was re-issued with new box art by Tetsuo Makita as 02515 (sometimes listed simply as '515'). This release featured three markings options - BII-315 as depicted on the box art, a Pearl Harbor attack aircraft from Hiryu, the silver and red-tailed 3-317 from the 12th Kokutai in China during 1940-1941 and A1-301 from Akagi as commanded by Cdr Mitsuo Fuchida during the Indian Ocean raids in 1942.

In the same year Hasegawa also issued the B5N1 variant as SP-19 with profile box art (above) by Eichiro Hasegawa, the artist responsible for many of the Koku Fan magazine colour fold-out profiles. This boxing contained the original Mania B5N1 sprue frame with appropriate engine and cowling parts together with the multiple bomb racks and bombs.  Two markings options were offered, the field-camouflaged and red-tailed 3-356 of 12th Kokutai in China as shown on the box art and a colourful silver C1-301 from the carrier Zuiho in 1942 with a red tail and red horizontal fuselage stripe. The camouflage for 3-356 was suggested to be mixed from Gunze (GSI Creos) aqueous (acrylic) paints; the green from 50% H5 Blue, 45% H6 Green and 5% H4 Yellow, whilst the brown was 60% H4 Yellow, 30% H7 Brown and 5% H3 Red.

In 1992 Hasegawa re-issued the kit as AT15 (above) with identical box art to the 1989 # 02515 issue but with different titling and logo presentation on the box top. Markings options were unchanged.

In 1997 the B5N2 was re-issued in a special edition as kit # AT106 'Pearl Harbor' with extra parts for a 800kg armour piercing bomb. The box art by 'K F' depicted Cdr Fuchida's AI-301 off Akagi but I do not have an example to record what other options, if any were provided. 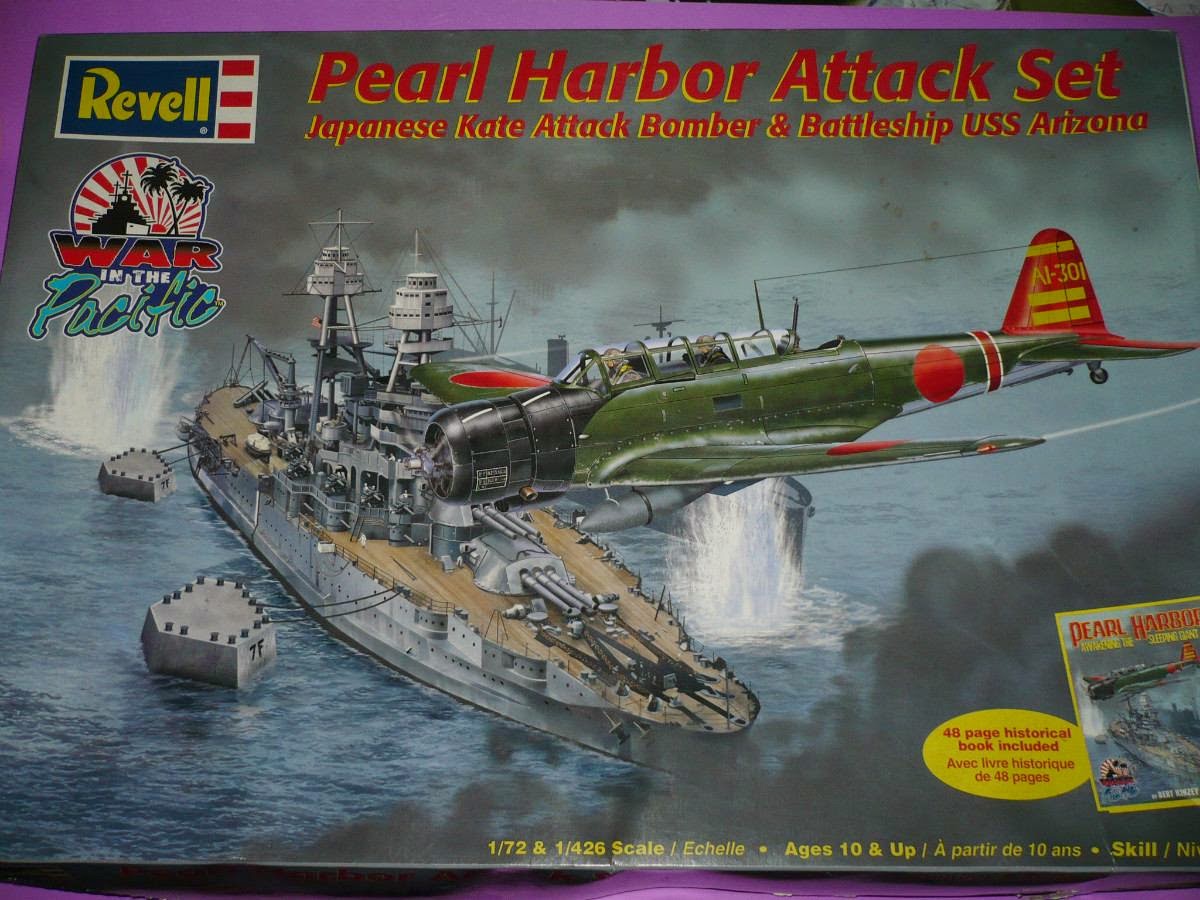 In 2001 to mark the 60th Anniversary Revell released a 'Pearl Harbor Attack Set' which consisted of their 1/426th scale USS Arizona kit together with a guest appearance of the Mania/Hasegawa B5N2 in Fuchida's AI-301 markings. The kit included resin and photo-etch parts for the 800 kg bomb. A review of  the complete set is here.

In 2002 the B5N1 flew again as kit # 00378 '3rd Air Wing' with new Shigeo Koike box art depicting the colourful C1-301 off the carrier Zuiho from the 1989 kit. A second silver and red-tailed Yokosuka Kokutai option was provided in the kit as Yo-335. Both torpedo and bomb armament was included.

In 2003 the B5N2 got another brief special edition outing as 'Pearl Harbor Torpedo Command' with the box art depicting A1-311 of Lt. Commander Shigeharu Murata off Akagi. I do not have an example of this kit to verify the number or other markings options and have only been able to find one small image of the box art (above) which replicates one of the 1/48th scale issues. The 1/48th scale version of the kit offered alternative markings for BII-320 flown by Lt Heita Matsumura off Hiryu.

2003 was a busy year as there was yet another special edition B5N2 issued as kit # 00635 'Midway' with unsigned box art depicting BI-310 of Lt Jouichi Tomonaga off Hiryu. This was a curious presentation as although only one option was shown in the kit instructions the decal sheet included a full set of BI and BII codes with alternative double blue fuselage stripes for the latter 'to be freely used'. Perhaps this reflected the fact that photographs of Midway Kates are as rare as hen's teeth. 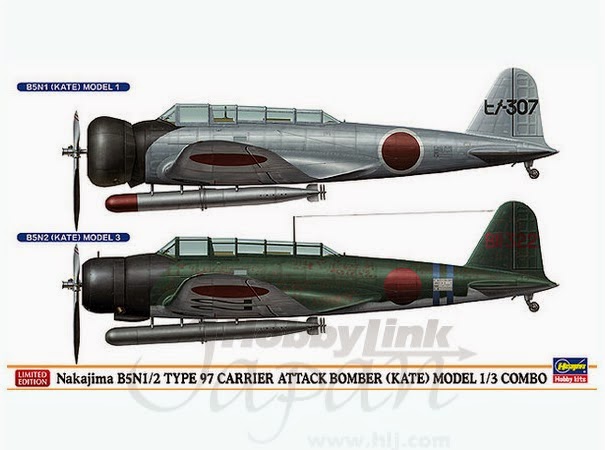 In 2012 Hasegawa issued one of their 'Combo' kits of the Kate with parts for two models representing both the B5N1 and B5N2. Optional markings for three aircraft were included, two with unusual tail codes: a natural metal B5N1 ヒメ-307 (Hi-me-307) of the Himeji Kokutai; B5N2 BII-322 off the Hiryu at Pearl Harbor and B5N1 ウサ-317 (U-sa-317) of the Usa Kokutai.

In 2013 Hasegawa re-issued the 800kg bomb-carrying Kate as a Limited Edition kit # 02013. New Shigeo Koike box art depicted Cdr Fuchida's well-known red-tailed AI-301 again with alternative markings for BII-307 off Hiryu. The bomb is  a white metal casting with photo-etched fins. With the release of the Airfix kit will there be any more Hasegawa Kate re-issues, one wonders?

If anyone has any other Hasegawa B5N1/2 box issues not shown in this article the author would appreciate scans of the box art and details to be included here, thanks.

Merry Christmas from Moscow! :) Tried to reach you yesterday via email but looks as it lost in cyberspace.
I also own Revell's repack of Hasegawa Kate as part of "Pearl Harbor Attack Set" with Revell' 1:426 Arizona kit. This set includes 800-kg resin bomb also, but this time from Czech maker. So for now we have 3 different 800 kg bombs - two from Japanese versions and one from Revell. My box of this set arrived almost destroyed from eBay but I still have original instructions and historical book from this set. Here are few pictures of this set found just few minutes ago at web:

Thanks for listing and explaining all of the variants of this kit issued by Hasegawa. Interesting, to me at least, as important as this a/c was from its involvement in China through the rest of the PTO in WWII, we have little in the way of books, aftermarket, and this is the only kit. Strange compared with the Aichi "Val" which was kitted by Airfix, Hasegawa, and Dragon!

Thanks Dmitry! I've now updated the article with that one.

The moulds for the Nitto Kagaku Nakajima Kate kit ended up in New Zealand, where they were used by Panda/Toltoys (New Zealand) Ltd, in Auckland. The product number was Art. 6064. The clue as to the origin of the moulds is the boxing, which makes no mention of the Allied designation "Kate."

Thanks 'm' for that interesting revelation. I Googled it hoping to find an image of the box but no such luck.
Regards
Nick