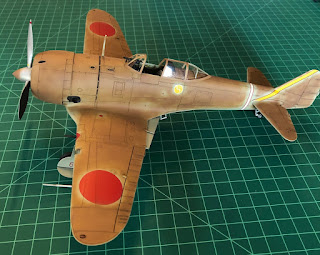 The third modelling project completed during quarantine by Ernest Pazmany is this splendid 1/32 scale Nakajima Ki-44 Shoki from the Hasegawa kit. The model represents the aircraft of Captain. Susumu Jinbo, leader of the 2nd Hentai (編隊 - formation) of Dokuritsu Hiko Dai 47 Chutai (47th Independent Flying Squadron), based at Saigon, Indo-China in January 1942. This experimental unit, the so-called Kawasemi Butai (川蝉部隊 - 'Kingfisher Force') and also informally referred to as Shinsengumi (新選組 - 'new selected band' or 'chosen ones', after the Shoganate era enforcers in Edo), pioneered pre-production versions of the Shoki in combat over Malaya and Burma from the beginning of the Pacific War. 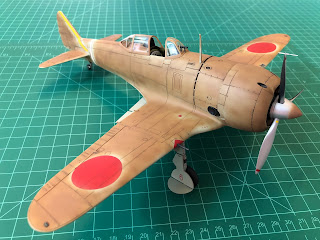 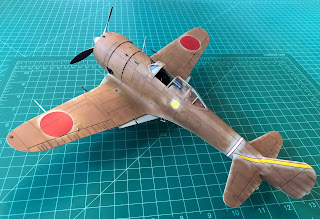 Ernest decided on a 'spotty' finish from preference (a preference fully warranted by recently published and very clear photographs whereas the Hasegawa kit instructions, if not their box art, depict a 'solid' finish suggesting Gunze 43/H37 Wood Brown) with a partially camouflaged spinner as shown in the photo of another aircraft from this unit. The overall base colour is Colourcoats IJAAF grey-green and the dense brown mottle Floquil French Air Force chestnut from his dwindling Floquil paint stash. The paint was originally produced by Floquil in their military colors line more than 20 years ago and Ernest notes that unopened they seem to last forever! He applied the brown color unevenly to depict a field applied  patchwork appearance.The ommission of antenna wire on all three models at this stage is deliberate in the interests of making sure everything is in scale. 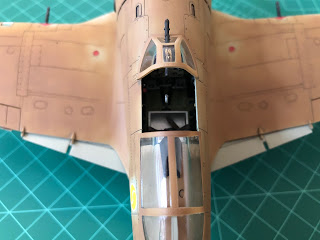 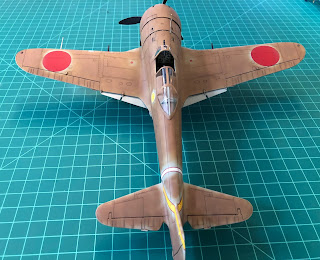 Ernest observes that the Hasegawa Shoki prototype kit had a generally good fit, especially in the cockpit area, the tailplanes, and the fuselage to wing attachments. However the cowling and engine placement was less than ideal with quite a bit of trimming required. He deployed the butterfly flaps extended as a personal preference only. 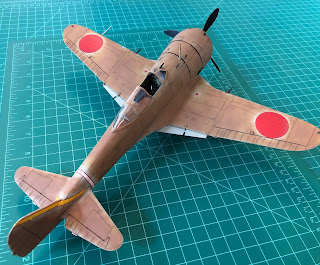 With special thanks to Ernest for kindly sharing these images and details with Aviation of Japan. More on the topic of experimental brown to follow . . . !

Another great model. These Kawasemi birds are among my favorite of the Shoki, I have the 1/48 Hasegawa kit in my stash for some day in the future. Thanks for sharing these with us, and looking forward to more info on the brown color!

Looks awesome. I have the Hasegawa 1/48 Ki-44_II Ko and plan on painting it the same colour as the brown spots over green stripes (85th Sentai) as in your Ki-44 Osprey book.

Brilliant paintwork in particular and an overall stunner!

Ernest,
I really like the look of this one, Ernest! Captures the feel of the photos I've seen. If I recall, almost forty years ago, you helped me find a 1/48 Monogram B-26 when they were impossibly scarce. The D.C. Nationals in...1983? Getting hard to remember.
All three of your models here are really nice. Model on!

Thank you everyone for your flattering comments.. I’m most appreciative ��. Mark, it would be great to catch up with you....some 37 years later (?)...LOL!