Donryu Decals from Rising in 1/72 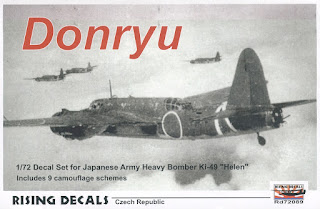 In addition to the new Hiko Dai 47 Sentai sets Rising Decals have released a set for the Nakajima Ki-49 Donryu bomber (Type 100 Heavy Bomber - Hyaku Shiki Juh Bakugeki-ki - 百式重爆撃機) in 1/72 scale. Set RD72089 offers markings for nine different schemes for the Hasegawa kit although they could probably be applied to the older Revell/Takara kit by those who have those in the stash.  Donryu has tended to be dismissed in most accounts but its operational history is quite interesting and some details are included here, courtesy of Dr Yasuho Izawa's seminal Nihongun Juubaki-tai (Japanese Army Heavy Bomber Units). 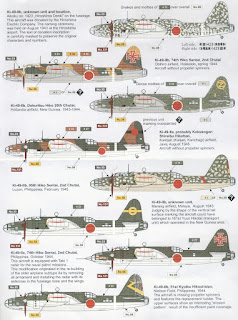 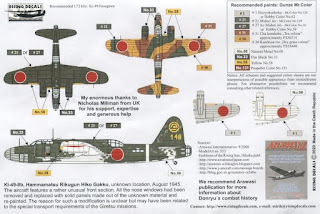 The subjects included are as follows:- This is a useful set of decals offering several interesting and intriguing examples of Donryu, an aircraft type which seems to be seldom modelled. Photographs of completed Donryu models, whether old Revell/Takara or  Hasegawa, are therefore especially welcome. Please note that on the third sheet shown above the lightning bolt is printed in the same orange-yellow as the other markings - the scanning having distorted the colour value in the image.

The 74th and 95th Sentai formed the 5th Hikodan, together with the 38th Sentai with Ki-46, to participate in the second phase of the Sho operation no.1 in the Philippines campaign. From June to August 1944 the Donryu units had trained hard for the forthcoming Philippines battle, practicing skip-bombing tactics to attack enemy vessels accurately at low level using IJN bombs which had been modified for Army racks and operation.

The 95th Sentai was originally established as a Kyodo (air instruction) regiment in Manchuria during 1941 as part of the Paichengtzu Instruction(al) Air Brigade/school (which included the 204th fighter and 208th light bomber regiments). It was retitled to operational Sentai status in January 1944 within the 5th Hikodan (with 74th Sentai and 38th Sentai with Ki-46).  In March 1944 the unit moved to Obihiro on Hokkaido.

The 74th Sentai had joined the 5th Hikodan at Paichengtzu in Manchuria during 1943 and in the spring of 1944 moved to Japan in response to the developing war situation and was stationed in Hokkaido with detachments at Kita-chishima to continue training. The 74th flew into Del Carmen airfield in the Philippines on 17 November 1944, despite the grave misgivings of the Brigade commander Col Kojiro Ogawa who thought the airfield was too vulnerable to attack. The aircraft had their fuel tanks drained as a precaution against fire and were camouflaged with foliage. On 19 November Lt Eiichi Sasaki ominously failed to return from a pre-dawn patrol in one of the radar equipped aircraft and during that day the unit lost 26 of its 28 aircraft in attacks by VF-11 and VF-20 Hellcats. The 95th Sentai flew into Clark Field South on the same evening with 27 aircraft together with two replacement aircraft for the 74th.

From 23 November and despite their anti-shipping training the two Donryu units began conventional night bombing attacks against airfields on Leyte, dropping 50kg bombs from altitudes of 10-13,000 ft with flame dampers attached to their exhausts   On 25 November the 95th sortied six aircraft to attack Tacloban airfield at low-level, carrying additional volunteer gunners for strafing. This operation was repeated the following night but three aircraft became lost on the return trip and had to make forced landings at sea with the loss of two crews. The Donryu units continued their night bombing attacks until 6 December when 17 aircraft participated in the attempt to capture Buri airfield, 13 of them dropping smoke canisters to assist the paratroop operation and four aircraft making deliberate forced landings on the Dulag and Tacloban airfields to disrupt operations there.  The 10 personnel in the four sacrificed bombers were awarded special attack citations and posthumously promoted two grades.

On 8 December the two units sortied to make their only low-level skip bombing attack of the campaign when they attempted to attack enemy vessels in Ormoc Bay. Of the seven aircraft sent out two turned back, one after becoming separated and damaged in a chance encounter with a B-24 and another due to bad weather. Four aircraft failed to return but Capt Sueo Yamamato claimed hits with two 250kg bombs on a transport ship.

On 13 December and against the wishes of Col Ogawa the 4th Air Army commander General Tominaga ordered the 5th Hikodan to expend all surviving Donryu in suicide attacks as a Tokko unit. The following day nine Donryu under Capt Yoshimasa Maruyama sortied as a Kikusui tai but failed to rendezvous with escorting fighters and were caught by P-47s over Panay Bay with all of them being shot down. After this the remaining aircraft reverted to conventional night bombing attacks against San Jose airfield on Mindoro, with one or two aircraft sortied every night from 20 to 26 December. From 2 to 14 January the Brigade began withdrawing to Taiwan, making repeated return flights to evacuate all personnel. Col Ogawa described the Brigade's experience in the Philippines as "like meeting a flood in an isolated house on a sand bank in the middle of a river and being swept away". After the Philippines campaign the 95th was disbanded and its surviving personnel absorbed by the 74th Sentai.

Whether Revell-Takara or Hasegawa, Donryu is worthy of modelling in tribute to some very brave men.

With special thanks to Mirek of Rising Decals for kindly providing  the review set and to Dr Yasuho Izawa for his kind translation of Nihongun Juubaki-tai.

Thanks for the unit histories in this blog, Nick. I had been unaware that the Japanese practiced skip bombing techniques. The crew were indeed brave to go up against such overwhelming odds....

I rather like Donryu despite its generally bad press and intend to do a few more blogs on the subject.

Thanks for this notice & the history, Nick.

Do you know what unit(s) the P-47s belonged to that attacked the Ki-49s led by Capt Yoshimasa Maruyama over Panay Bay?

This is a fascinating (though tragic) post, thank you Nick for presenting it in such a fine way, and to Dr. Izawa for allowing his work to be shared here.

I remember the Revell Takara kits as first class, and I would like to see some builds of Helen, whether that kit or Hasegawa on this blog as well.

George also covered the new product from Rising Decals. I pull both blogs up every morning on my laptop and the tabs are right next to each other (way more fun than reading the news...).

Anyway, the question still stands: Do you know what unit(s) the P-47s belonged to that attacked the Ki-49s over Panay Bay?

Not to worry! It seems to go with the territory and I doubt George is ever addressed as 'Nick'!

As to the question the attacking P-47s were from 40th FS of 35th FG. There were two Japanese survivors from the Donryu crews who gave accounts claiming attacks by P-38s and 'Grummans'. According to the P-47 pilots the Donryu were painted 'greyish-black' or all black with mottled green under surfaces. There are more details here, including combat and POW reports:-

From all the accounts it seems as though the Donryu were planning to make low-level skip-bombing attacks with Tokko crashes perhaps as a last resort but as always confusion reigns when attempting to reconcile different accounts. What is certain is that Japanese records record all nine Donryu lost and all crews KIA.

Thanks for the review sir, I love their realeases.