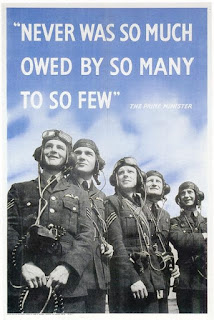 A digression from blog focus if not from the subject of aviation to commemorate today as Battle of Britain Day (in the UK) and the 80th anniversary of the great battle in the skies over south-east England from July to October 1940 which culminated on the 15th of September. The scale of public commemoration has diminished in recent years but I shall always believe it to be a true turning point in the fortunes of the Second World War when RAF Fighter Command defeated the Luftwaffe attempt to secure aerial supremacy over this island and a vital haven and springboard to the subsequent liberation of Europe was protected and preserved.

The RAF officially records 2,937 pilots as having fought in the Battle, average age just 20 years, and they came together from 16 nations including the Commonwealth. This is not to forget all those men and women who contributed so much to the Luftwaffe defeat, from the ever-toiling RAF groundcrew to the civilian boffins who pioneered the radar network, from the observers on the ground to the personnel in the plotting stations and control rooms, and many, many more.

The victorious RAF pilots came from:-


522 RAF pilots were killed during the battle and many more were injured, disfigured with burns or permanently disabled. Today they are all remembered and commemorated on behalf of this nation with gratitude and respect for their effort, endurance and sacrifice.
Posted by Straggler 脱走兵 at 13:10

And speaking personally, they are remembered here in the US as well. It's impossible to overstate how grateful any person can feel for their effort, sacrifice, and place in history.

Thanks for posting this today, Nick.

Thanks for presenting this tribute, Nick.

Never was so much owed by so many to so few ...

I remember them every year on this date (in addition to my remembering the assault on Peleliu which happened on this day in '44, my father was there). I may be across the pond so-to-speak, but I'll never forget the sacrifice made for all of us in the free world by those men and women.