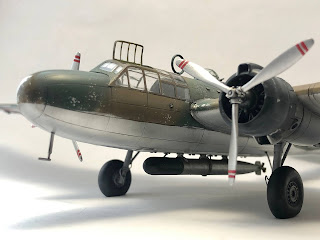 Next from Jason Brash is this excellently realised model of the Mitsubishi G3M2 'Nell' (IJN Type 96 Land-based Attack Aircraft - 96-Shiki Rikujoh Kogeki-ki - 九六式陸上攻撃機 - known colloquially as the 96-Rikkoh - 九六陸攻), built from the 1/72 Hasegawa kit and representing the aircraft flown on 10 December 1941 by Lt Kauro Ishihara of Genzan Kokutai as he began the first wave attack on Force Z - HMS Repulse and HMS Prince of Wales, launching a Type 91-kai torpedo at the latter ship. In Jason's own words then:- 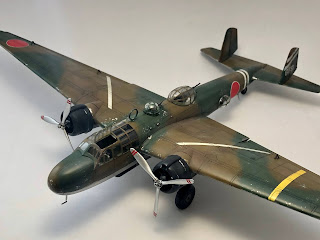 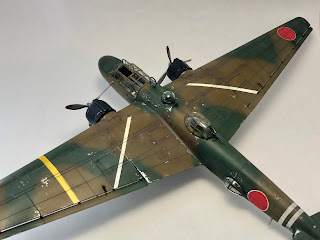 'This project was started about 10 years ago but unfortunately sat on my shelf of doom until about a month ago when I finally decided to use it as a bit of a test bed for colours. As you see it progressed further. 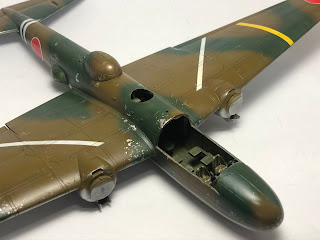 'Initially I built the cockpit, landing gear and torpedo as well as assembling the fuselage and wings. I started to paint the markings and the exterior with Vallejo silver but it didn't turn out well, with a lacklustre shine and grainy surface. The model was put to one side to gather dust until recently when I watched a movie where I got an idea on how to age silver without loosing the lustre. So out with the sanding pads and the Nell was back on the bench. 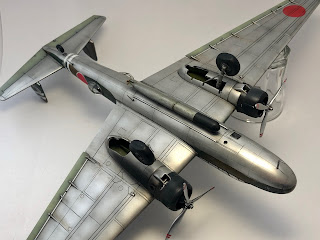 'I started with polishing the surface before using SMS paints again. I was excited to use their metallic range as the pigment is very fine and the surface is very durable. I first painted the entire aircraft in Jet black, then applied Super Silver. The surface was then marbled with a light grey before Super Silver was again applied over the surface to blend the two colours (the natural metal effect is excellent! Ed.) 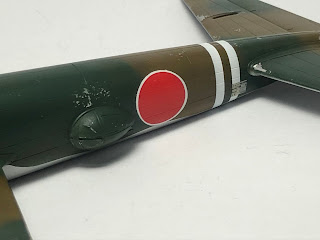 'The upper surface camouflage is based on my interpretation of the kumogata scheme. The two colours were airbrushed freehand using two RAAF colours - Foliage Green & RAAF Earth as the base colours, then highlighted with RAF colours Forest Green and Dark Earth. The colours were then sun bleached with a very thin white sprayed through a spray mask. 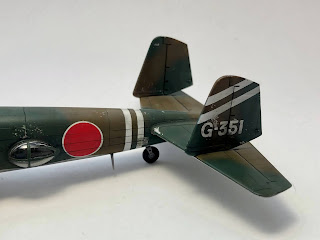 'With the model looking decent I decided to complete it and display it. I applied markings for an aircraft that attacked the Repulse and Prince of Wales on December 10th, 1941 in the south China sea. If I had my time again I might have gone with a brown that was a little lighter, something that I have since purchased and will experiment with in the future. Still it was nice to revive an aircraft from the shelf of doom.' 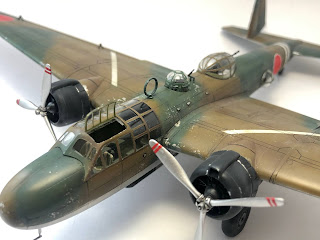 With special thanks to Jason for sharing these images and details of his build of a very fine model.

Another beautifully executed model of a beautiful aircraft. And I fully agree on how the NMF looks, perfect! Thanks again for sharing this with us, Jason!

Another great model! The subtle weathering top and bottom looks very realistic.
It's a G3M, isn't it? I've always been amused by the two dorsal turrets in a row - if the first gunner doesn't hit, the second one might do better...


Very well done in all aspects..beautify made indeed!

Great observation from Mr. Thurow... I have also wondered about the staggered positioning of the port and starboard side gun blisters...could it be part of the same hit them coming and going theory :))

Thanks for all the kind words guys, always nice to heard feedback on my work and appreciate the time to write a comment

That is one splendid Nell. Superb paintwork in my humble opinion. Such a great kit that you don't see built enough. I thought it went together as smoothly as a kit possibly could for a bomber its size when I built it. Hasegawas Japanese twins are all kits to be thankful for.

The earlier variant had two fully traversable dorsal turrets to permit the engagement of enemy fighters attacking simultaneously from different directions - a solution later adopted on the B-29. The larger clamshell turret was inroduced to permit operation of a 20mm cannon but was not fully traversable so the smaller turret was retained.

The staggered side blisters were arranged thus to permit the gunners to operate without impediment in the narrow fuselage. Had they been aligned the gunners would have got in each other's way.

An inspiring Nell build, Jason & thanks for sharing it with us, Jason & Nick.

Great model! I like G3M. I hope I will make model in the future of this plane in 1:72 scale.