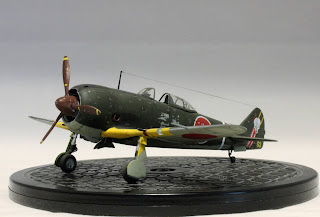 William  Davis has very kindly shared these images of his model of the Nakajima Ki-44 Shoki 'Tojo' built from the 1/48 Hasegawa kit and representing an aircraft of Hiko Dai 29 Sentai in August 1944. William replaced kit parts with a True Details seat and Quickboost exhaust, as well as using Eduard masks. 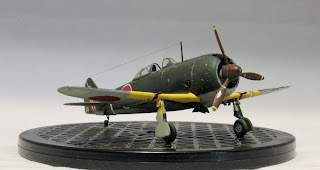 After assembly of the main components the model was primed and painted overall with Tamiya aluminium as a base coat. William then sprayed a cheap hairspray onto the aluminium before applying the top coats of Tamiya XF-13 J.A. Green on the upper surfaces and XF-14 J.A. Grey on the under surfaces with AK 2071 to highlight panel lines. He then chipped the paintwork with a moistened toothpick and also used fine sandpaper pressed into the paint to simulate micro scratches. The decals used were from Revi sheet # 48005 for the Ki-44. 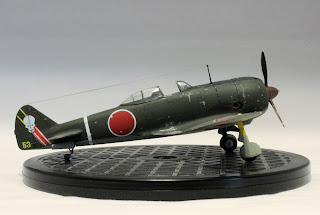 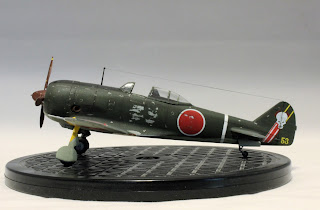 In February 1944 the 29th Sentai was reformed as a fighter regiment at Hailang, Manchuria from the 29th Dokuritsu Hikotai, a reconnaissance unit and part of the 13th Air Brigade, converting first to the Ki-27 and then the Ki-44. On 6 May 1944 the Brigade, then consisting of the 29th, 30th and 31st Sentai, was formally transferred to the 8th Air Division on Formosa (Taiwan). The 29th departed Manchuria on 3 July with 38 Shoki but lost 17 aircraft during the staged movement across China with only 21 arriving at Taipei. The Sentai Commander Maj Takeo Kawada felt the losses were due to insufficient training on type so despatched the main force of the unit to Hsiaochiang airfield for further training, retaining only nine aircraft at Taipei under Capt Masatsugu Tsuchihashi, the Hikotai and 1st Chutai leader, for air defence duties. 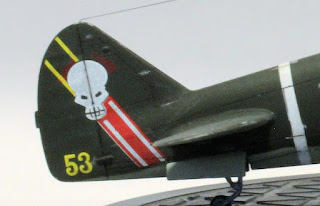 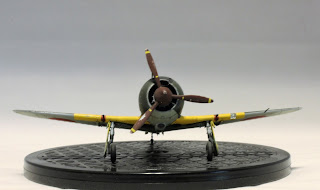 It was during this period that the 29th adopted the unusual tail insignia of a horned skull, symbolising great change and the veneration of the dead, with a pattern of diagonal bands to denote Chutai and Shotai, the sequence and assigned colours of which are uncertain. A former member of the unit has confirmed that this was the Sentai insignia at that time and not a personal marking. In August 1944 in response to an increased tempo of operations in China the main force of the unit was despatched there, arriving at Nanjing on the 27th of that month with about 20 aircraft and being deployed to Wuchang. It was then assigned to the air defence protection of traffic on the Yangtze River and Army supply lines, with little opportunity for aerial combat. The unit's only major combat in China occurred over Ertaokou (Kiukiang) on 7 October 1944 when it lost two of five aircraft scrambled in response to an incursion by P-40s of the 74th FS. The early warning system had failed and the Japanese fighters were caught taking off with Sgts Mitsuo Hashimoto and Masao Gomi being killed. The 29th claimed two P-40s shot down although none appear to have been lost, whilst the 74th claimed two 'Oscars' destroyed, two damaged and one probable. 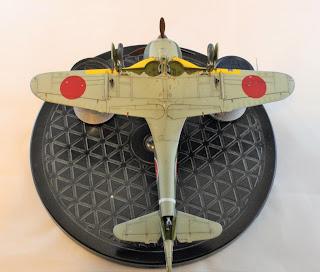 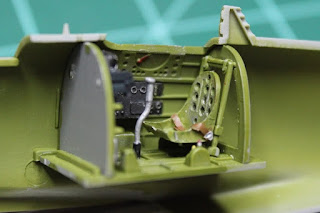 When Formosa came under attack from US carrier forces from 10-12 October the loss of aircraft, including a Ki-44 from the 29th Sentai cadre piloted by WO Ryotaku Hase, prompted the return of the China detachment on the 18th of the month. Around this time the tail insignia was changed to the better known 'wave-arrow' marking which, whilst often depicted on the unit's Ki-84 Hayate aircraft, was the subject of considerable doubt as to its existence due to the absence of photographs. It was first depicted in the December 1964 issue of the Japanese Aireview magazine in a series on IJAAF unit insignia illustrated in colour by Kikuo Hashimoto (see below), subsequently presented in a colour profile by Uwe Feist in the Aero Series # 2 book 'Nakajima Ki-84 Hayate' (Aero Publishers, Inc., 1965) and became well known from the painting by Jack Leynnwood which featured on the cover of 'Japanese Army Air Force Camouflage and Markings World War II' by Donald W Thorpe (Aero Publishers, Inc., 1968). More recently photographs have established the existence of the marking on a Ki-44 abandoned in the Philippines (please see Osprey Aircraft of the Aces 100 'Ki-44 Tojo Aces of World War 2' photo page 51 and profiles 17 and 18 also shown below courtesy of the artist Ronnie Olsthoorn). 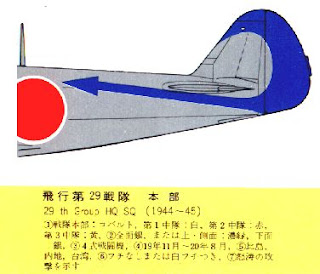 From 8 November 1944 the unit served in the Philippines from main and auxiliary airfields at Zablan near Manila with about 20 Ki-44 where it suffered heavy losses with 15 pilots killed in action, including Capt Tsuchihashi the newly appointed Sentai commander who fell in combat on 7 December 1944. On 13 November the unit was heavily engaged with USN carrier aircraft raiding across the Manila area, claiming nine enemy aircraft destroyed and two probables for the loss of six aircraft and four pilots which included the 3rd Chutai leader Lt Tokuji Chiji-iwa. Following the raids a total of 30 USN aircraft were reported as losses, including 10 Hellcats, with 11 pilots missing or killed. The surviving elements of the Sentai's Philippines deployment were withdrawn to Formosa in January 1945. During service in the Philippines the unit had begun conversion to the Ki-84 Hayate. It remained in Formosa until the end of the war but participated in the Okinawa campaign. 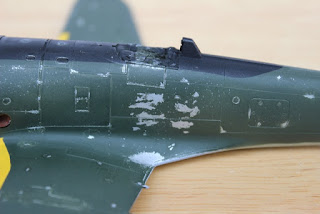 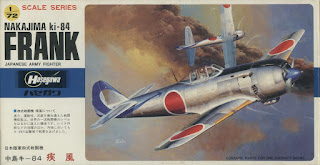 The 29th Sentai wave-arrow marking was featured in the box art of Shigeo Koike and as a decal option in the 1982 Hasegawa 1/72 Ki-84 kit as nicely modelled by Britmodeller Sean here.
With special thanks to William for kindly sharing these images and details of his inspiring Ki-44 model here and to Ronnie for his kind permission to show his superb Ki-44 profiles.
Image credit: All model photos © 2020 William Davis; Profiles © 2020 Ronnie Olsthoorn; Tail insignia image © 1964 Aireview magazine/K Hashimoto; Box art © 1982 Hasegawa Corp.
Posted by Straggler 脱走兵 at 13:59

Nice Shoki and great story. Thanks! I haven't seen this martial Sentai marking before.

Thanks for the sharing and the combat story.
The model is nice. Rare and interesting variant.

Enjoy seeing both the model (well done!) and the background of the unit. Thanks as always for sharing with us....

Very interesting site. It is easy to find people involved with the history of the Allied aircraft.

Very nice looking Shoki!...along with a fascinating historical record of the 29th Sentai.

Thanks so much for sharing

William,
This is beautifully rendered, and it's really refreshing to see a Shoki model in such different markings. I knew nothing about the details Nick shares here, besides Ronnie's great artwork and its earlier appearance, until I read this account. Thank you, William, Ronnie, and Nick. Great post.