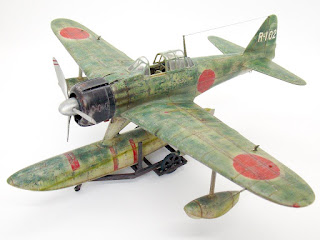 Guillermo's pal Edgar built this 1/48 scale Nakajima A6M2-N 'Rufe' from the Hasegawa kit and for the same South American challenge, replicating a very heavily worn sea-booted and bomb-armed warrior. The model was fully riveted but other details of the striking finish are unknown at this stage. 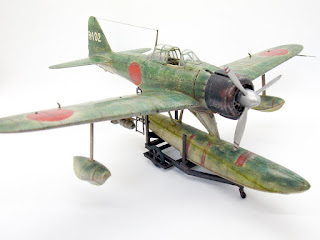 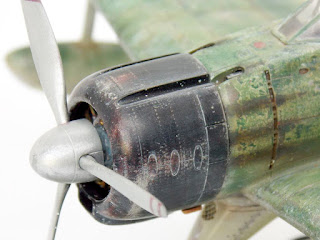 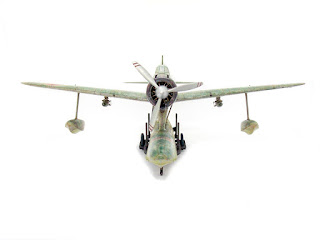 Edgar's model represents a weather and sea battered Rufe of 5 Ku operating from Kiska island in the Aleutians during 1942-43 and was one of the four subjects offered in the 2006 'Aleutian Islands' release of the Hasegawa kit. 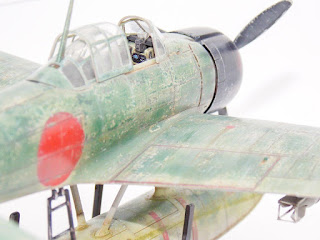 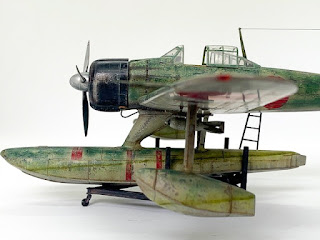 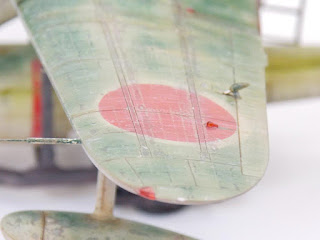 5 Ku was formed from the floatplane fighter unit of Toko Ku (already in the Aleutians) with 12 Rufes under the command of Lt Kishichiro Yamada in August 1942. The unit was heavily engaged in operations there and also had three E13A 'Jake' seaplanes attached for reconnaissance purposes.  By the beginning of Ocrober 1942 and despite reinforcement all aircraft had been lost and in November the unit was re-designated as 452 Ku. With further reinforcements of floatplane fighters that month the unit continued to fight in the Aleutians until the end of March 1943 when the surviving pilots were evacuated by submarine. CPO Gi-ichi Sasaki was the single ace of the unit, claiming four aircraft shot down, five shared shot down and one shared probable. Having survived a forced landing in a damaged Rufe which overturned on 15 September 1942, CPO Sasaki failed to return from a reconnaissance sortie over Amchitka island on 19 February 1943. 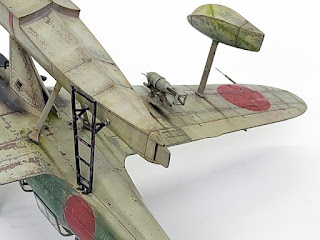 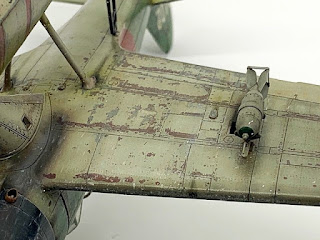 Toko Ku had been formed at the seaplane station of the same name on the southern tip of Taiwan in November 1940 as a Kawanishi H6K4 and H8K flying boat training and development unit. In July 1942, after operational service during the invasion of the East Indies, a detachment was sent to the Aleutians for survey purposes accompanied by six Rufe floatplane fighters under Lt Yamada. That floatplane fighter detachment was the cadre for the later established 5 Ku. Total A6M2-N production of 254 machines went far in terms of theatres of service with monthly production peaking at only 24 in April 1944 and ending in July of that year. At the time of 5 Ku's formation in August 1942 only 13 A6M2-N were produced by Nakajima that month. As a floatplane fighter and given these production numbers the type's operational service record is uniquely distinguished if not heroic. Fortunately the type is well represented by kits in the popular scales of 1/72 and 1/48 and there is a conversion set from Model Design Construction for 1/32 A6M2 kits.
With special thanks to Guillermo for sharing these images of Edgar's excellent and dramatically presented war-worn Rufe.
Image credit: All photos © 2021 Edgar via Guillermo
Posted by Straggler 脱走兵 at 12:43

Wow. Truly remarkable. The chipping,the staining, the rust, the pitting. Very convincing weathering. What a fantastic representation of a war worn warbird. I am in awe. This is great modelling. And thanks Nick for another intriguing and informative history to bring life to this splendid Rufe. Bravo Edgar!

Superb work in every aspect! As Mr.Bade noted so accurately described it is a very realistic representation of a well-worn warbird..In particular, the underwing bomb details are perfectly executed.

Thanks, as usual to Nick for the amazing historical details and Edgar for the fantastic model!

Fantastic weathering and detaisation.
Thanks for sharing.

Great looking model Edgar. Very convincing weathering even on the undersurfaces. The ladder is nice to see. Thanks Nick for putting this together, combines two of my top interests being seaplanes and the Aleutian islands.

Very well done weathering, without being heavy handed. The colors are very convincing, too. Thanks fir sharing with us,