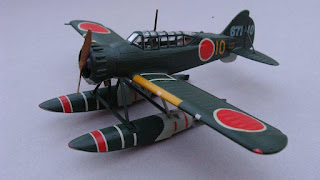 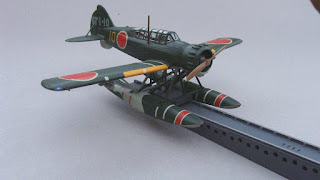 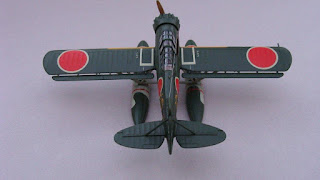 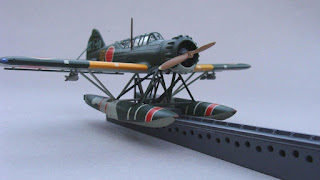 'This interesting reconnaissance floatplane was designed and developed by the Japanese Navy for submarine service during WW2.  Although not a combat aircraft the Glen could carry two small bombs on under wing hard points. The Fujimi kit also included a nice representation of a submarine launching catapult as a stand for the model. And speaking of which, I'd like to see the rail mounted trolleys the seaplanes were wheeled around on aboard IJN cruisers and battleships as separate kits for display purposes.  (Agreed! Ed) 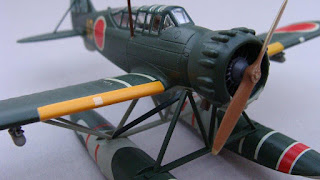 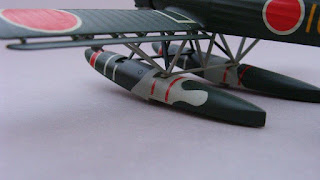 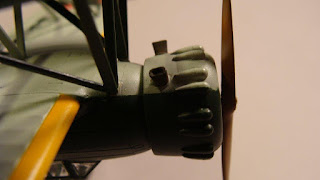 'The building of this particular kit lasted from August to November 2000 during Seaplane Summer IV and was completed out of the box.   The fit was excellent throughout and although the one piece canopy is slightly thick it manages to look the part. 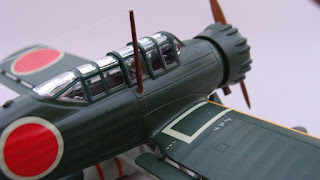 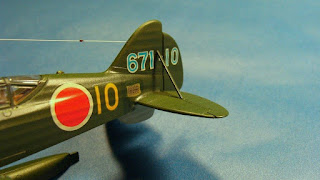 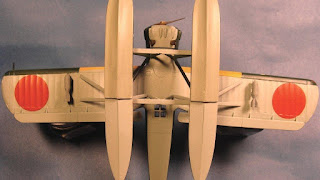 'On to painting and finishing.  The top color is a mix of 2/3 Aero Master Nakajima Army Green and 1/3 Tamiya XF-11 Japanese Navy Green.  Undersurface is Aero Master 9091 Japanese Navy Gray.  The topside green looks well enough for 1/72 but on a larger scale model I'd go with something a little darker.  The kit supplied decals were used as I like the blue over white tail markings for this machine.  The hinomaru insignia were also used (as you can tell) from the same sheet.  They were right on the cusp of entering into the 'danger zone' of the dreaded orange-pink variety.  I would choose replacement decals now but they don't look too garish and maybe only a few hawk eyes in the audience would notice.' 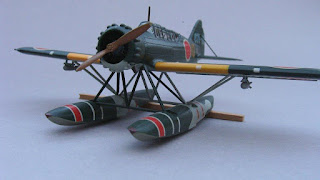 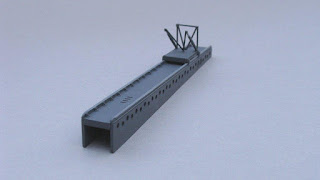 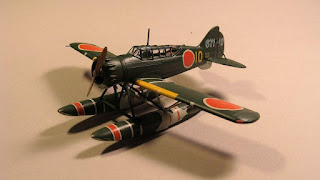 The E14Y is significant not just for its submarine deployment but also for its far reaching clandestine reconnaissance missions over Allied territory and the bombing of a forest in Oregon, USA, on 9 September 1942 by WO Nobuo Fujita and CPO Shoji Okuda in a 'Glen' flown from submarine I-25. The blue and white '671' code on Jim's model identifies the 6th Submarine Fleet and the individual aircraft number was repeated on the fuselage aft of the hinomaru in white or yellow paint.  More on 'Glen' models and kits here and here. The best English language reference resource on 'Glen' so far is Ryusuke Ishiguru's excellent monograph on the type (below) published by MMP books in 2012 and reviewed on AoJ here, but now sadly out of print. However . . . 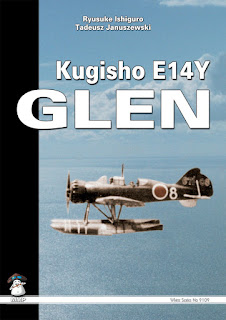 With special thanks to Jim Anderson for sharing these images and the summary of his build.
Image credit: All photos © 2021 Jim Anderson; Book cover © 2012 Ryusuke Ishiguru & MMP Books

An interesting a/c and a lovely build.

A sweet little model, nicely finished. The E14Y is an interesting topic. I followed a controversial discussion recently if any 'Glens' saw pre-war service in silver/red decoration or if these were just pre-production examples. Photo evidence seems scarce.

Such an excellent example of a fascinating aircraft

Thanks to Nick as well for the always on the mark historical notes!

I'm glad you wrote this one up, Jim.

I've seen this one in person and it looks even better with the Mk I Eyeball!

Seaplane Summer is a real deal at Casa Anderson. Sounds good right now as it's 26 degrees Fahrenheit as I write.

Many thanks for showing so many interesting floatplanes lately on the blog, Nick (Seaplane Winter?), and for the historical background on many of them.

Thanks for the encouraging words! Dittos Nick for giving the "floatboats" some air time on your blog and a heads up on a new IJN submarine aircraft book - looks good.