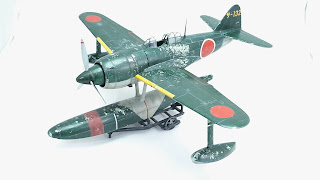 Beginning a short season of Japanese Navy floatplanes with this magnificent model of the Kawanishi N1K1 Kyofu Type 11 built from the 1/48 scale Tamiya kit by Guillermo as part of a 60 day modelling challenge 'War of Nation' held in Latin America. 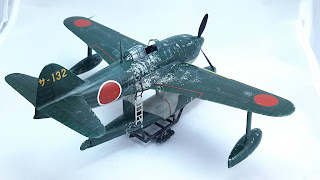 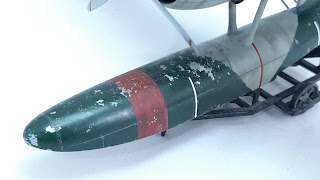 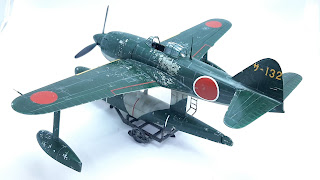 Guillermo built the model almost from the box with only the addition of Eduard seat belt and Moskit metal exhausts. The interior was painted with Ronin Xpectrue enamel Pale Green FS 34227. 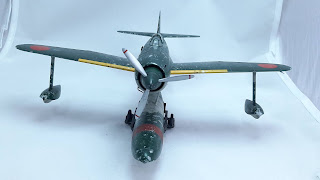 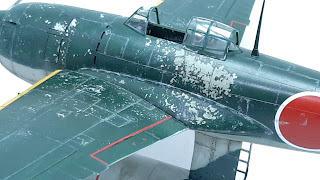 The exterior of the model was first painted with Tamiya XF-16 Flat Aluminium then Vallejo's Liquid mask was used to depict areas of wear before Model Master 2116 IJN Green was applied to the upper surfaces and Vallejo M-495 Light Gray FS 36357 to the under surfaces. The trolley and ladder were airbrushed with a mix of Tamiya X-18 and XF-63 (in the ratio 2:1) to obtain a very dark grey finish and weathered effect for salty water. The kit decals were used to represent aircraft サ-132 ('Sa'-132) of the Sasebo Ku in September 1944. 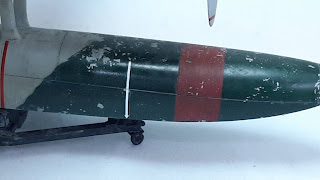 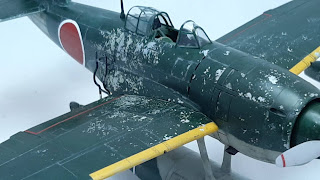 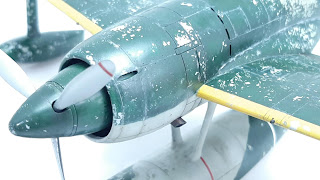 Sasebo Ku was a mainly seaplane and flying boat unit engaged in reconnaissance and convoy escort duties equipped with a variety of such aircraft including the A6M2-N 'Rufe' floatplane fighter for air defence. The Kyofu was operated by Sasebo Ku alongside the Rufe from August 1944. 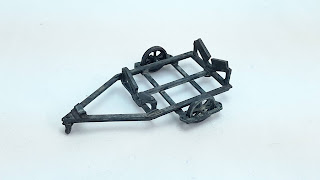 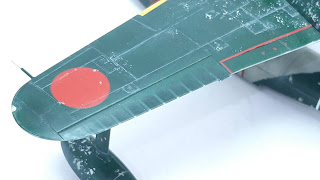 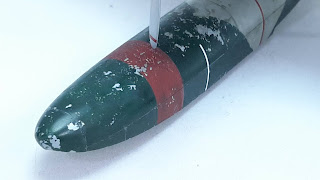 With special thanks to Guillermo for sharing these images of an excellent Kyofu model and also for introducing other forthcoming models made by his friends for the challenge.

Such a fantastic Kyofu in particular the chipping effect and tones of paint are incredibly realistic and the open cockpit is perfectly executed.

Thanks for sharing Nick and Guillermo !

Great job Guillermo! Thanks for the historical notes, Nick.

The interesting weathering. The intresting model.
Thanks for sharing.

Very nicely done, thanks for sharing with us!

Yes, nice chipping and weathering. Great looking rendition of a tough seaplane fighter. I have this kit in 1/72 by Hasegawa, built several years ago. The kit has a smaller spinner, indicating one of the last variants produced? My markings are the same except the decal on the tail is "134" and there is no yellow ID on the wing. Thanks Nick for this one and the well received seaplane coverage!

Super model of the tough looking Rex. Nice work on the weathering. Have the 1/72 kit nearly done hope mine turns out half as good as yours Guillermo.

Thanks so much, gentlemen. I really enjoyed a lot in painting process!!