Zero Under Fire by Carlos 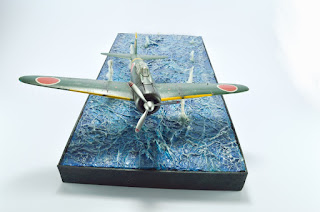 Guillermo's friend and troika team mate Carlos built this impressive display for the War of Nation Latin America 60 day challenge using the old Tamiya 1/48 A6M2 with added riveting detail. The Zero being flown low over a furrowed seascape through anti-aircraft fire and about to pull up in a desperate attempt to hit its target bears the colourful markings of a training unit, the Kohnoike Ku. If that seems unlikely bear in mind the words of Hatsuho Naito* describing the Kikusui No.1 operation:- 'Every aircraft that could fly, including old Zero planes from the Tenth Naval Aviation Fleet being used as training aircraft, were commandeered for the suicide attack operation.' 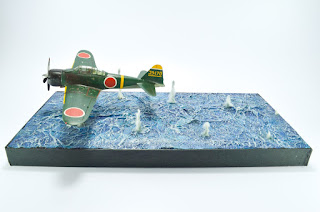 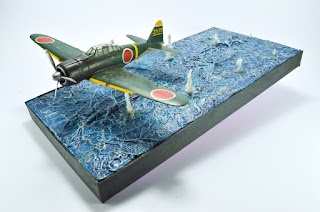 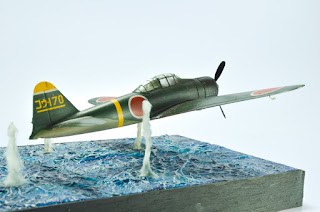 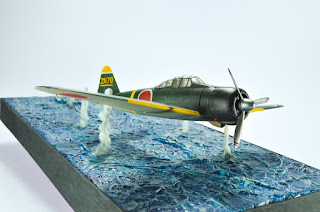 Guillermo's own Rex and team mate Edgar's Rufe were the other entries in the challenge. 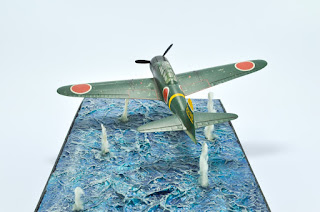 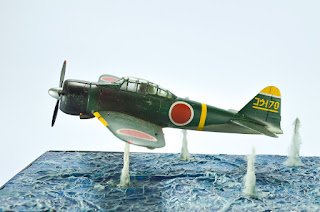 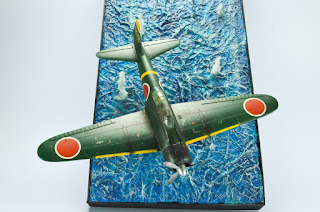 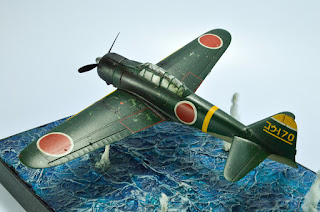 With very special thanks to Guillermo and Carlos for sharing this imaginative and evocative display which captures the desperation of the Kikusui operations and the tragic courage of the thousands of young men who volunteered to sacrifice their lives by literally flying into fire.
"Tomorrow, I take off for the attack, a robot in a plane. But on the ground I have been a man moved by his emotions and his passions. I will have no fear of death."
Yoshi Miyagi, fell 19 May 1945 off Okinawa
"I am ready. No tear, no friend, no marriage-hymn
To cheer me on my miserable road
On me no more the sun will shed his holy light
Alone I go - no friend, no tears"
The Antigone of Sophocles**
* 'Ohka hijo no tokko heiki' by Hatsuho Naito (Bungei Shunju, 1982), published in English as 'Thunder Gods' by Kodansha International, 1989.
** Translated by T Kinchin Smith, 1950 and quoted in 'The Sun Goes Down' edited by Jean Lartéguy (William Kimber, 1956)
Image credit: All photos © 2021 Carlos via Guillermo

Superb idea and implementation. Thanks for sharing, Nick.

This is extraordinary! Very realistic. I admire your creativity and modelling skills.
Thanks for showing us.

Such brilliant and creative workmanship on display !

Thanks to Nick for sharing the poignant and evocative words

I've had such a diorama idea in my mind for many years. But you've got it on your shelf! Very nice work, Carlos. Thanks for sharing it, Nick.

In recent years I've seen a host of original diorama displays, but nothing like this yet. Very cool!

Very nice and thought provoking diorama. Am I missing the boat here by asking how that Zero is suspended above the water?

i think you have to look at under the left wing to see how the zero is supended....