Aviation of Japan Texas correspondent Mark Smith has very kindly provided this review of Lifelike Decals new trio of sheets for the Type 97 fighter, Ki-27 'Nate' offering no less than 25 subjects in 1/48 scale.

'Some of this blog’s readers may have been lucky enough to have picked up Lifelike Decals 1/48 Ki-27 'Nate' decals several years ago (sheets 48-020, 021 and 023).  I was too late, as they were Sold Out quite a while ago. Now Lifelike has given us another crack at these colourful birds through this newly released trio that is even better, featuring more recent research as well as additional subjects not available on the earlier sheets.  Due to this the original trio remain as Parts 1, 2 and 3 with these latest sheets labeled as Parts 4, 5 and 6. They are printed by Microscale, and on my samples the colours, registration, and detail are up to Lifelike’s typically high standards; the accompanying detailed information sheets also offer much information about the units, pilots, and in certain cases, colours of these aircraft which is often not generally available in English.  But on to particulars… 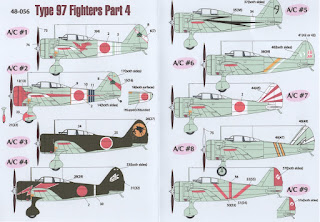 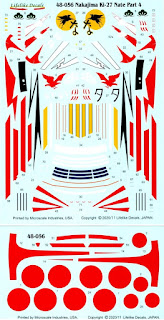 Individual notes for each of these aircraft are helpfully keyed to 20 references on the instruction sheet. Masking templates are also provided for the synchronisation calibration markings on the forward cowling for those aircraft with over-painted cowlings. This attention to detail, typical for Lifelike, is highly commendable. 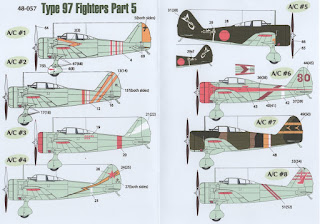 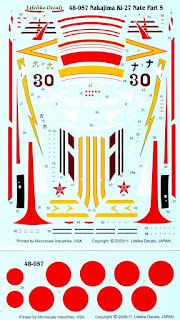 48-057 Type 97 Fighters Part 5
Again individual notes for each of these aircraft are helpfully keyed to the 23 listed references. 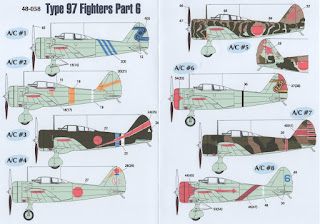 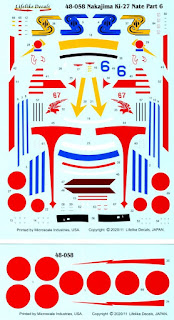 48-058 Type 97 Fighters Part 6
Individual notes for each of these aircraft are also helpfully keyed to 23 listed references.
'Each of the three decal sheets has appropriate hinomaru markings and the small adhesive paint masks that will save much time for undertaking the cowling markings on certain aircraft – very thoughtful.  If you purchased the original Nate Trio, now Sold Out (Parts 1,2 and 3) note that there are ‘new’ options on Parts 4, 5, and 6. Lifelike Decals are as good as any I’ve used, and like their recent Tony and Claude trios, these comprehensive and exacting sheets should set the standard for a long time.'  – Mark Smith
With very special thanks to Mark Smith for providing this review and to Keishiro Nagao of Lifelike Decals for very kindly providing the review sheets. I can vouch for Mark's observation that these sheets are superbly printed. They are designed for the excellent Hasegawa (ex-Mania) kit, offering some strikingly colourful and well chosen subjects which will no doubt inspire many a stash rummaging.
Image credit: All © 2021 Lifelike Decals
Posted by Straggler 脱走兵 at 12:38

Thanks, MarK & Nick, for this notice & info.

What a wonderful set of decals!

Yes indeed, nice! I had a chance to look at them on the big boy computer to do them justice. Thank you Mark and Nick for a good look.

Really impressive decals. If they'd make it in 1/72 I would be obliged to build a bevy of nifty Nates.

Great review, Mark. I had actually forgotten that I had one of these sheets!

Really nice decals. I wonder, with more and more modellers painting their markings, will decal companies start offering options for paint masks alongside their decals?

Thanks to Nick and Mark for posting this.