Recent Rising Decals sheets include these two very welcome sets of markings for a selection of fighters operated by Hiko Dai 50 and 64 Sentai, which performed long and distinguished service during the Burma air campaign, ultimately in the face of increasing odds. Both sheets include each type of fighter operated by the units, including captured Allied aircraft. 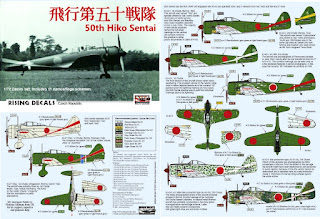 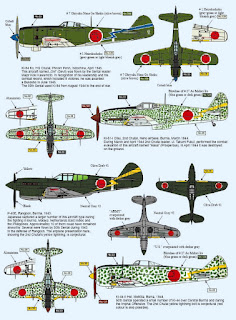 Starting with RD72098 for the 50th Sentai the instruction sheet erroneously states that this was the first IJAAF unit to operate the Type 1 Fighter Hayabusa. In fact Hiko Dai 59 Sentai was the first unit to operate the Hayabusa from June 1941, followed by the 64th Sentai in September of that year, those being the only two units to take the new fighter  into combat when the Pacific War began. All other Army fighter units were still equipped with the Type 97 (Ki-27 or 'Nate'). The 50th converted to the Hayabusa in Japan, from April 1942, after fighting over the Philippines and Burma with the Type 97. This sheet offers markings for the following 11 subjects :- 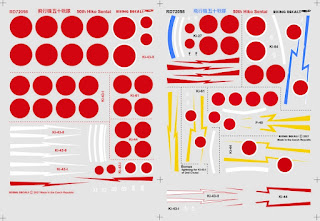 The first four subjects on the sheet are depicted in solid green over natural metal, grey green or light blueish grey. A recent Japanese reference book has stated that the under surfaces of all these aircraft were unpainted although in the past a thinly sprayed coating of grey has been suggested, whilst RAF crash and combat reports describe both natural metal and grey painted under surfaces. This densely packed sheet offers an impressive selection of schemes for the different types of aircraft operated by the 50th and is beautifully printed with excellent register and saturation; the cobalt blue and orange yellow markings being stronger than suggested by the website images shown here. 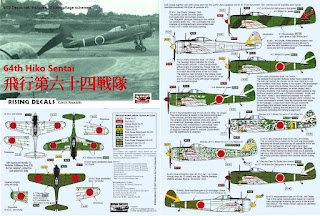 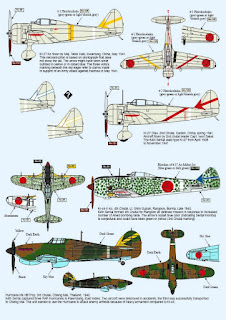 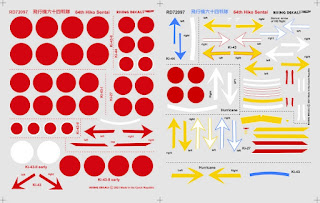 This is another excellent and well printed sheet ripe for personal interpretation in the completion of some of the very interesting but not fully documented subjects. The sheet also includes a bonus white arrow insignia outlined in blue for the Sentai HQ flight. The hinomaru on both sheets could perhaps be a brighter red but frankly that would probably be considered incorrect by a majority of modellers.
With special thanks to Mirek of Rising Decals for the review sheets and not least for continuing to produce such high quality and interesting Japanese markings decals to augment or replace those included with kits.
Image credit: All © 2021 Rising Decals
Posted by Straggler 脱走兵 at 14:11

Oh boy thanks for the heads up Nick I cannot wait to get hands on these. Superbly executed and researched decals.

Another winner from the Rising team!

Thanks to Mirek & Nick!

This is the first time I have seen a 50th Sentai Ki-61. Were many assigned to the 50th, or was this more of a commander's aircraft?

The 50th evaluated the Ki-61 as a possible replacement for the Ki-43 during March and April 1944. 1Lt Takami Fukui, 2nd Chutai leader, collected the first example from Singapore and in keeping with Sentai practice it was given the name 'Masa' (昌 - Prosperous, bright, clear) but it was destroyed on the ground at Aungban on 4 April 1944. A second Hien was received and some maintenance personnel had instruction on the type but ultimately it was considered unsuitable for Burma and the Sentai was scheduled for re-equipping with the Type 4 Hayate - Ki-84 'Frank' instead.

Thanks for the information, Nick, both on the decals and that unusual Hien. Do you know whether these have appeared / will appear in 1/48? Great post, and beautiful work as usual, Mirek.

Thanks for the explanation, Nick.

Thanks for the notice on these decals, Mirik & Nick.