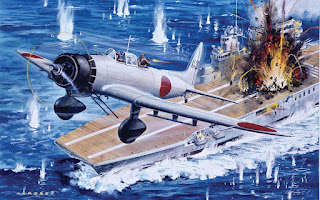 Airfix have announced the re-issue of their venerable 56 years old 1/72 Aichi D3A1 'Val' kit this autumn, presumably to coincide with the 80th anniversary of the attack on Pearl Harbor. The other two aircraft deployed in the attack, the Mitsubishi A6M2 Zero and Nakajima B5N2 'Kate', have both been released by Airfix in new tool versions but the price of the Val kit suggests it will be the original moulding perhaps, hopefully, with some cleaning up. The pre-order price of £9.99 is modest by currently ever increasing standards for kits but even so a far cry from the 3/-6 (three shillings and sixpence = 17.5p) of 1965.

The Airfix website shows the original Roy Cross artwork (above) but whether the kit is presented in that same guise or offers any new identity or warpaint remains to be seen. Despite its supposedly fatal flaws I have always rather liked this simple kit. The number available on eBay suggest that I am in a minority about that. Various improvements, including sanding off the rivet matrix, are easily accomplished and excellent replacement ordinance is now available via Ushi. Going the whole hog might include re-setting the angle of the undercart and replacing the crude interior of pegs and chairs with scratch-built plastic card, but with the canopy closed up very little can be seen. There is no doubt that a new tool Val in this scale would be welcome as the Fujimi alternative (cloned in poor imitation by ZTS Plastyk) is now in the hard to find category, also rather dated compared to current technologies, whilst the Dragon/Cyber Hobby kit (also released by Platz) is both flawed and expensive, costing even more than the superior Hasegawa 1/48 scale kit.

Oh boy! It was the first two-seater that I dared to build in around 1968. That's nostalgia proper! Thanks for highlighting this Nick (won't buy it though).

I'd like to know more about the flaws in the Dragon/Cyber Hobby kits (I have both versions in my stash, along with the Hasegawa 1/48th kit)... I'll probably never get around to building them, unfortunately. I may have built that Airfix kit as a teenager... I remember the rivets.

The Dragon kit was reviewed here in comparison with Fujimi and Airfix in September 2013:-

Please use the link or find the article via the Archive in the sidebar.

The faults may have originated from an intention to offer both D3A1 and D3A2 variants not fulfilled. I don't know if more recent Cyber Hobby releases have addressed the issues reported.

I still remember my first trip to the local Squadron Shop store ( yes they had actual hobby stores) around my tenth birthday and I saw the Airfix D3A with Mr. Cross's inspiring artwork and I decided that Japanese aircraft were the coolest. I left with my birthday purchases amounting to an Airfix Val, an Airfix Dinah ( with another spectacular Roy Cross boxart) and an AMT rebox of Hasegawas Betty. Interestingly all three have flames or explosions going on...just what a young man wants to see. Nice to see Airfix re-issue the D3A but isnt it time to complete the Pearl Harbor trio with a new tool up to the standards of their lovely B5N.

Here's to Squadron Shops and box-top artwork with explosions and flames :)

Indeed, that Roy Cross box-top artwork just has to be in the "Box-top Hall of Fame" (one really needs to be created:) as it is simply fantastic !

I am in complete agreement with Mr.Bade as we all really do deserve a "new tool" version of such a significant and great-looking aircraft as the D3A1. Hopefully, the folks working at such dynamic new companies as Arma Hobby, Clear Prop, Eduard, Dora Wings etc. will seize the opportunity and create a new "Val" in 1/72.

I'm hoping Hasegawa starts re-tooling their 1/48 kits from the 1990s. While they are still fine kits (their modern 1/32 kits look very nice, just need a new 1/32 Oscar), they lack the quality of their mid 2000s kits. Also, there are some accuracy issues that need to be addressed: Ki-43 shape, Ki-44-I rudder and fuselage doors, and I think the fuselage ammo access hatch, which are a symptom of Hasegawa wanting to re-use parts for various plane versions. Also, I'd like the option to have an open canopy straight from the box, its a shame to hide all that detail. If Hasegawa kits were only half the quality of the latest Tamiya kits (read Zeros/Tony/Spitfire) in terms of fit, design, and engineering, then they would be twice as good as they are now.

I was really hoping that Airfix would make it a hat-trick and give us all three in a re-tooled version.
Oh well. Really, we can't complain IMHO.

Thanks for the notice, Nick. We are still waiting on Infinity Models' 32nd D3A1 release.