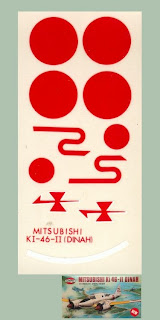 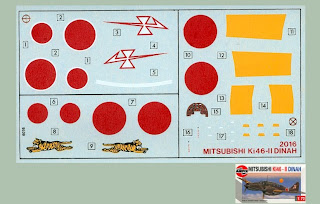 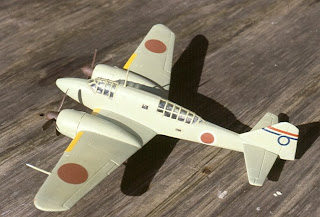 As requested, here are images of the decal sheets included in the second and third re-issues of the Airfix 1965 veteran. If anyone does know the exact year the second re-issue appeared please let me know, thanks. One thing to watch out for with the third re-issue is that the Hinomaru borders are more often than not out of register! Note the inclusion of trestle markings, prop blade markings and instrument panel with this sheet. The tiger is also a better likeness to the originals.

One of the things I like about this kit, in addition to the fine shape and simplicity, is the fact that the fuselage halves are molded in one piece. Both the LS and Hasegawa kits have separate nose halves and a separate upper fuselage, clear in the case of the latter, that require careful assembly and filling, risking the destruction of some of that very fine detail.

To round off, a trio of images of a veteran Airfix Ki-46, completed in 1975 by Ken Glass, demonstrating just what an attractive model she makes. Ken used the 19th Hiko-Dan tail markings from the LS kit to complete this model.