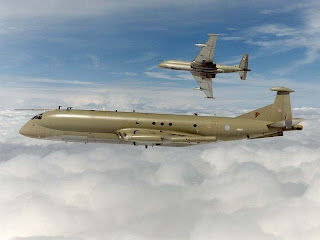 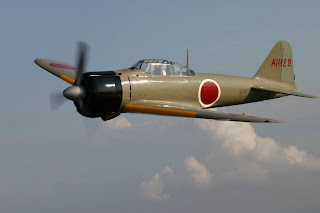 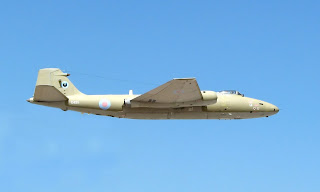 It may seem odd to examine the colour of modern RAF aircraft on a blogsite about Japanese aviation but please bear with me!
The RAF camouflage popularly known as 'Hemp', now officially 'Camouflage Beige' BSI 381c # 389, was developed from a compromise for a suitable camouflage to protect aircraft on the ground in dispersals and in the air. The original choice for a low reflectivity scheme was a brown, like Dark Earth, but eventually the colour chosen as most suitable was matched to the Munsell value 5 Y 6/2 from the BS 4800 'Specification for Paint Colours for Building Purposes'. The approximate Munsell value from this colour standard is 4.8 Y 6.0/1.8.  This should be of some interest to us as 5 Y 6/2 is the same Munsell value which has been cited for the extant paint colour on some Mitsubishi Zero artifacts.
Many enthusiasts will be familiar with the actual appearance of 'Hemp' on the RAF's Nimrod and Canberra, and the way the colour can appear differently depending on the lighting conditions. Sometimes more yellow, sometimes more grey, sometimes more green. In fact these aircraft provided a useful "living" demonstration of the Japanese Zero colours and many photographic images showing their subtle changes in reflected appearance may be found on the net. Usefully a number of hobby paint ranges offer 'RAF Hemp' and modellers may like to experiment with them on a Zero model.
As the colour was originally chosen from a commercial paint standard the various proprietory names for the paints are illuminating:-
'Lava'
'Lizard'
'French Grey'
'Fawn Grey'
'Trout Grey'
'Wallaby'
'Eddystone'
'Pumice'
'Cotswold Tile'
The closest RAL colour match to Munsell 5 Y 6/2 is 7034 Gelbgrau (Yellow Grey) at 3.09. The closest FS 595b match is 33303 at 3.26, but it is too brown. (less than 2.0 = a close match).
Image credits: Internet pics
Posted by Straggler 脱走兵 at 14:19

Hi Nick,
How ironic that this Friday I was looking at the Gunze Mr. Color version of RAF "hemp" and put it back on the rack.......I'll try grabbing a bottle next time I am at the local shop to see how it compares with other mixes and out of the bottle colors.
Dan

Hello Nick! :)
You can also check Vallejo ModelAir 023 "Hemp" paint. Last year I chose this paint as overall color for my next FineMolds 1:72 A6M2b. I published some photos on j-aircraft.com.
Dmitry

Thanks Dmitry for the tip about Vallejo 023!