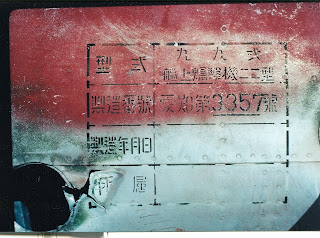 A flurry of emails has prompted this extra post in the Aichi D3A2 'Val'; Interior in Detail & Colour series to clarify the origin of the photographs. Whilst the source of the formatted images (for the Aviation of Japan blog) was Mark Smith, it was Greg Springer who actually took the majority of the photographs in 1976. Greg has very kindly given permission for the photographs to continue to be shown here.
I was puzzled when Jim Lansdale mentioned the s/n as being 3150, because the data block shown in one of the photographs is 3357. This minor mystery was also cleared up by Greg who explained that there are two D3A2 airframes at the Nimitz. The main one, shown in most of the photographs, was 3150, recovered from Gasmata together with an A6M2 of the Tainan Ku by Australian military forces. In gratitude the Nimitz allowed the Australians to keep the A6M2 which was later restored and is now in an Australian museum. An enquiry from Jim Long led Greg to discover and photograph the constructor's number in the 1980's.
The tail section and propeller are from 3357. They were recovered from Cape Mensing on the northwest coast of New Britain near Cape Gloucester. This aircraft was coded 82-248 from the 582nd Ku and was probably part of the ill-fated attack on the Cape Gloucester landings in late December, 1943.
The image of the data block shown above is from Greg's photo-shoot in 1976. The block appears to have been applied over the dark green and primer, preserving the dark green beneath it. The circular aperture is the transverse tube for hoisting the rear fuselage for maintenance.
With Special Thanks to Greg for the clarification and the additional details about these aircraft.
Image credit: © 1976 & 2009 Greg Springer
Posted by Straggler 脱走兵 at 12:40

To Nick & all mentioned below,

Thanks for taking time to make these clarifications.

About the second D3A2 airframe at the Nimitz Museum: Does anyone have photos they could post of it? A short one page article about these displays is on the rear cover of Arawasi #9. It describes D3A2 s/n 3357 as being on exhibit inside the museum building.

I am also somewhat confused:
what is what here?

p.s. Thank You for posting