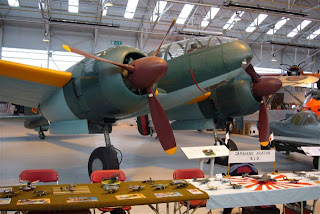 You can't have a much better demonstration of modelling and the real thing than this photo of the IPMS (UK) Japanese Aviation SIG (Special Interest Group) model display at the RAF Cosford modelling show, set up in the imposing shadow of the world's only surviving Mitsubishi Ki-46 'Dinah'.
Sitting at a desk authoring a blog is a very different (and much less arduous) proposition to the sterling work Gary Wenko, leader of JASIG, does in promoting both the SIG and the hobby. Gary does an enormous amount of legwork to fly the Japanese aircraft modelling flag at all the shows in the UK, driving many miles and lugging many model boxes, setting up the displays and being a dedicated focal point for stimulating and maintaining modelling interest in all aspects of Japanese Aviation here - not without its political dimensions. He also creates, edits and publishes the regular all-colour JASIG newsletter 'Japanese Aviation News' which reflects Japanese aircraft modelling for a worldwide membership and Gary's passion (shared by me) for kitography, the rarer, older models and the lesser known aspects of the genre, including captured aircraft, be they Japanese aircraft in Allied markings or vice-versa.
If you are interested in joining the Japanese Aviation SIG please contact Gary via the link in this previous post.
Image credit: © 2009 Gary Wenko JASIG IPMS(UK)
Posted by Straggler 脱走兵 at 11:13

Great photo. Please post more, if there were more, of the Dinah and the kits on display.