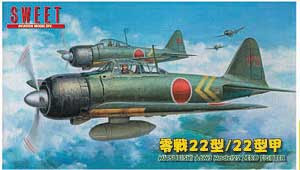 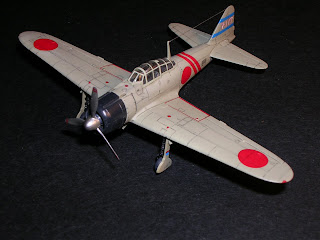 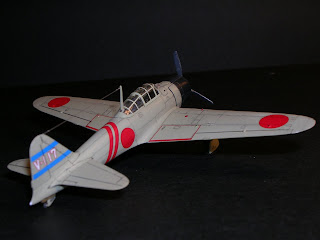 It is very hard to believe looking at these pictures (and click on them to see the real deal - those canopy frames!) that this superb model of the A6M2 is only to 1/144th scale - the Sweet kit as built by Mark Smith.
Mark has also kindly sent me his review of Sweet's latest Zero version in this scale, the Model 22, A6M3.
"My buddy P F Simmons had a surprise for me when I dropped by before Christmas this year - yet another release in Sweet Aviation's burgeoning line of 1/144th scale Mitsubishi Zero kits. Hard to believe, but this is the 22nd release in their line-up of single-engine WWII fighters (the 21st was the Model 32 with clipped wingtips). This one is my favourite so far and for my money the prettiest, the Model 22 which flew some of the longest and most gruelling missions in the Solomons campaign.
This kit, like the original, eliminates the separate folding wingtips of the A6M2 releases and has the appropriate tiny details of the ailerons and trim tabs, antenna mast and propeller spinner and prop. The box art is exquisite (I wish Sweet would drop the "manga" cartoon style box art they opt for on some of their releases). Best of all are the markings options. This version sported the most variegated camouflage of all the Zero variants, as evidenced by the five variations on the decal sheet so nicely done by Cartograf. Overall grey, stippled green camo and solid green over grey are all there from the 582, 201 and 202 NAGs. The fifth option is one I've never seen, '2-163' as flown by Lt Shirou Kawai from Rabaul, New Britain. It has two diagonal leader's stripes on the fuselage and the tail codes also have stripes above and below; these being provided in both yellow and white (Sweet is apparently not sure which is correct and leaves it up to the modeller to decide). I sure would love to see the photograph(s) this scheme is based upon.
I now have five different Sweet Zero boxings, which together sport decals for 33 different airframes! Thanks to P F I also have the separately marketed Akagi Fighter Group decal sheet, which provides 21 additional choices! Good grief! When I first started collecting in this scale I always bemoaned the dearth of available decals.
Unlike the A6M2 kit which I built, this one has a pilot seat provided, much appreciated as it's a pain to make in this scale and will be visible.
Whilst I can testify that painting the canopy frames in this scale is crazy-making, think of it as the one hard thing you have to do to make a lovely little model. I have built three of Sweet's Hurricanes, two Wildcats and the Model 21 Zero, and the tool-making, accuracy and fit of these kits are outstanding.
I keep waiting for them to branch out with something a bit bigger. Think of the money Sweet could make with a B-17 in this scale! Well, we can dream - and in the meantime build lots of Zeros. - Mark Smith
Image credit: Box Art © 2009 Sweet Aviation; A6M2 model © 2009 Mark Smith
Posted by Straggler 脱走兵 at 08:10

Great work on the model.