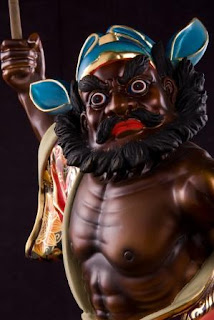 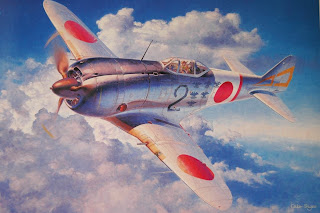 Hasegawa's big scale kit of Shoki, perhaps the most underestimated and misunderstood JAAF interceptor-fighter, has arrived and details of what is inside the box may be found here. The book of the kit (or is it vice versa?) arrived at the same time so a double post is probably warranted today to begin something of a Shoki-Fest here at Aviation of Japan, the only independent English language website devoted to Japanese aircraft.
I have mixed feelings about the kit. Whilst I am delighted to see one of my favourite Japanese aircraft getting the large scale treatment I am also feeling trepidation knowing that all the forum big scale bozos are going to jump on the bandwagon in endless pontificating threads about the aircraft and its colour schemes, especially the internals (watch this space)! Maybe Hasegawa should only sell it to those who can complete and pass a lengthy and detailed test on Japanese Army aircraft. The bozos should definitely be kept from getting their hands on this one - it just does not deserve a matt brick red propeller or an aotake interior.
Ok, Ok, I know. This smacks horribly of snobbery and elitism so I'll move on. It's tongue in cheek anyway so "Calm down, dear!".
It is clear from the kit breakdown of parts and the parts layout with the pieces "not for use" that other earlier versions of Shoki are intended. In fact these could be built from the one kit as it stands, although there are no decals for them. I wish that instead of re-releasing the same basic kit endlessly with different box art and decals Hasegawa would offer it as a straightforward multi-version kit with a decal sheet with options for all the versions. Ho hum.
Another surprising thing about this kit is that the distinctive side access panels on the cockpit are not separate parts. It would be a relatively easy job to cut them out (and a good opportunity for the photo-etch boys) but I would have expected this characteristic feature to be included in a kit of this scale (frankly in preference to separate flaps) to better show off the detail in that narrowly apertured 'pit'.
No doubt the usual bozos will wax lyrical about the flaps not being seen deployed on the ground. Wrong! There are photographs showing them deployed open in ground running and servicing - so wind your necks in and get back to those 109's. This is a Japanese aeroplane and we don't want your Luftwaffe pedantry here, thank you!
Hasegawa suggest "Khaki Green" (GSI Creos 54 or H80) for the majority of the interior but I haven't checked that paint colour out in comparison to the Army 39 standards (more about Shoki colours later). "Metallic Blue Green" (GSI Creos 57 or H63) or "silver" are suggested for the wheel wells - the Army "aotake" was often a "slimy olive green" rather than blue green but in fact the wells may have been the same colour as the interior (again, more about that later when we will really get into the nitty gritty of Shoki colour schemes).
Image credit: Shoki Statue Unknown; Box Art Hasegawa & Shigeo Koike © 2009
Posted by Straggler 脱走兵 at 11:23

I agree with you on the muti-variant kit and large decal sheet with many options.
it would be nice if more model manufacturers did this on a regular basis.