Sweet Little Hamp Over The Solomons 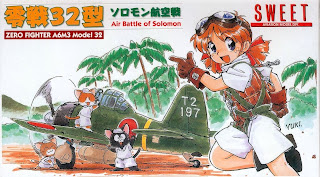 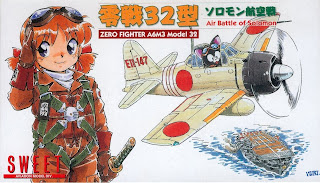 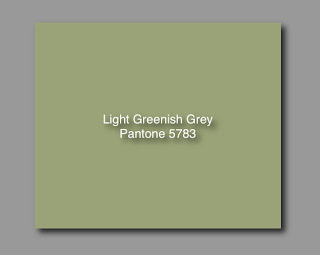 The most recent issue of the Sweet Hamp diminutive duo (14124-1200) eschews the realistic and evocative box art of the original for their trademark cartoon girl with saucer eyes and her feline groundcrew. This special 'Air Battle of Solomon' (sic) issue offers a very interesting option: a Zuikaku carrier-based Hamp in the early overall grey scheme with yellow wing IFF strips and twin white fuselage bands. The opportunity to put a Zero model of this type in this combination of colour and markings on a carrier deck is very tempting and makes the options in the Fine Molds kit appear rather unadventurous by comparison.
The other options offered in the kit are two Aikoku marked Hamps of the 3rd Ku flying against Darwin, the well-known T2-197 of the 204th Ku with field-applied green camouflage and a fuselage stripe Sweet suggest is yellow (it has been depicted as being various colours) and finally the famous U1-163 of the 251st Ku in both its pre- and post-camouflaged guises. Sweet settle for the U1 code being painted out rather than the red (or black) of some depictions. All most interesting possibilities.
Also included in the kit are optional 330 l metal and 280 l wooden drop tanks, as well as wing racks and bombs.
Sweet remain consistent in their suggestion of the overall factory colour being a 'Light Greenish Grey' which they match to Pantone 5783 and which is available as a ready mixed paint from Gaianotes, for which a flyer is included in the box. Perhaps the best way to describe this colour is as being similar to a pale version of RAF Sky. The closest Munsell and FS 595b equivalents are 5 GY 7/2 @ 3.29 (too light and too grey) and 14533 @ 3.18 (too bright and too green). A DE2000 value of 2.0 or less indicates a close match.
Image credit: Box art Sweet © 2009; Colour swatch Straggler © 2009
Posted by Straggler 脱走兵 at 11:04