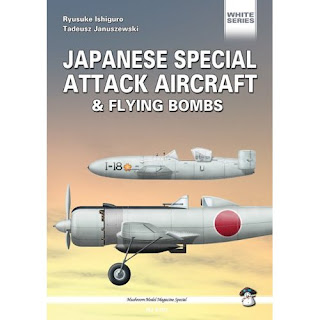 Authoritative English-language reference books on Japanese aviation subjects are rare and precious things but Japanese Special Attack Aircraft & Flying Bombs is an absolute gem. Authors Ryusuke Ishiguro and Tadeusz Januszewski have achieved a comprehensive exploration of a subject little known and hitherto poorly documented in English. Enhanced with unique and well chosen photographs the book provides a thorough and useful overview of special attack operations, from the culture behind the Kamikaze concept to a list of special attack units and the ships damaged or sunk by them.
The main body of the hefty 264 page book is logically divided into separate analyses of special attack aircraft and remote controlled flying bombs, covered subject by subject and organised by Army and Navy respectively. Of particular value to modellers are the scale drawings included for many of these. There are in addition diagramatic illustrations and performance tables. Finally a colour profile section by Zygmunt Szeremeta provides no less than 59 inspiring and colourful subjects, including depictions of the various flying bombs. It is as well to bear in mind that these are interpretations and however much one might disagree with some of the specific colours chosen and/or reproduced there is a paucity of available evidence to confirm them one way or the other. They are therefore perfectly valid to use as direct references for individual modelling projects - and very useful to.
Many of the photographs in this book are new to me. For example I had no idea that the Kawasaki Ki-102 heavy fighter "Randy" was used as the carrier aircraft for trials of the I-Go-1-Otsu (Ki-148) guided missile. If only there was a better (and more easily assembled) kit of this good looking twin than the Pavla example and that the Fine Molds missile kits were more readily available!
The book includes better known and popular modelling subjects like the Nakajima Kikka, Japan's surrogate Me 262, which is covered in 15 pages of text, with 14 photographs, 1/72nd scale plans, two colour profiles and a performance table. This depth of coverage sets the standard for this book which must be considered definitive and essential for anyone interested in the subject or the history of Japanese aviation generally. The Ohka rocket-propelled bomb receives similar coverage and benefits from recent revelations regarding appearance and colour. But in addition to these more mainstream subjects there is a host of lesser-known but equally fascinating types.
If I have any criticism of this excellent and wonderful book it is just a very slight concern that the softcover binding method might not prove resilient enough for its size, weight and likely usage. Personally I would have been prepared to pay a little more to have had such a useful reference book available in hardcover.
The authors can be justifiably proud of this superlative achievement. It is very highly recommended.
Image credit: Mushroom Model Publications © 2009
Posted by Straggler 脱走兵 at 12:53

I just downloaded the sample pages from MMP website. Looks very good, but I have a question concerning the Ki-115 plans (if any), could you check (I presume you have the book?) the wing shape as most drawings (and the Eduard kit) have it wrong - too small and wrong shape.

IIRC REVI drawings are currently the best ones.

I have a question regarding the Ki-49 three-view. I have the Hasegawa kit of this plane with the antennae(?) on the nose and wing. The kit is labeled as an anti-submarine aircraft, but from what I can gather from the book, the authors refer to it as a special attack machine.

Vedran, indeed stick with the Revi plans. The Mushroom book has the same error as most other Ki-115 plans - at least in the top/bottom views. The Revi plans are much more accurate and more detailed too.
Having spoken with the authors they are aware of the problem but there was no time to implement a correction before publication. There are a few other errors, such as the sloped-back Kokusai Ta-Go (spine should be horizontal) and swapped Baika I/II designations and sliding canopy. But you can't win 'em all! It has been a mammoth effort to put this fantastic book together and the authors should be most proud of their achievement.


Btw. Nick, agreed on the hardback. After a few days my covers show signs of wear already. I'll happily pay more as I only paid £15 for mine via Amazon - such a bargain because you get a LOT of book for your money with such fascinating photos, etc, etc!