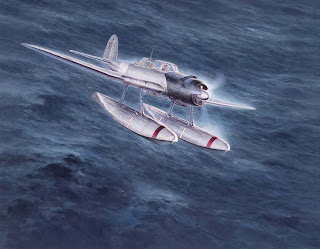 The original IJN finishing specifications for the floatplane Aichi E13 "Jake" called for the interior to be painted with an undercoat of brown enamel and a top coat of light grey green enamel. The latter is presumed to be one of the "hairyokushoku" (ash green) colours in the 'M' series of that name in the IJN provisional paint colour standard known as Kariki 117. The closest Munsell value for this paint colour is 7.5 GY 5/2 with the closest FS 595b value being 24226 @ 2.35 (but which is a little too grey and not quite yellow/green enough). This interior colour also compares exactly to the Thorpe identified colour N4 'light grey green'. 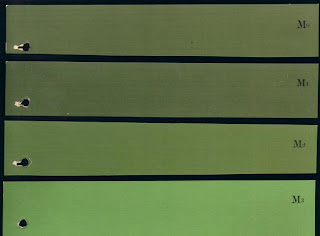 Now some further confirmation of this interior colour has been provided by the appearance of the paint surface extant on Aichi "Jake" wreckage studied by Australian researcher Owen Veal (of the Australian Aviation Heritage Centre in Darwin) and shown here via the kind courtesy of Bob Alford (author of 'Darwin's Air War'). The graded scale presented with the images below shows proportional mixes of the Humbrol paint colours 86 'light olive' and 78 'cockpit green' (the latter paint is usually cited for the WWII RAF interior grey-green colour). 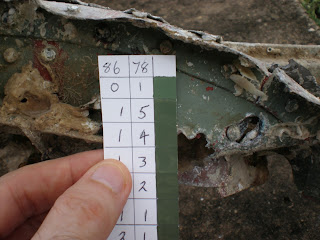 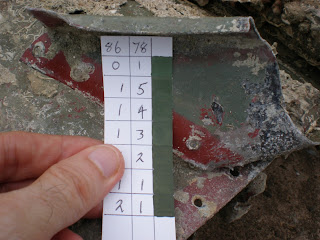 With thanks to Bob Alford for the account of the examination and images.

After I posted this blog Mark Smith kindly reminded me about Ichiro Hasegawa's notes on Aichi interior colours included in the Koku Fan magazine. In May, 1984 Hasegawa-san had reported that "One day a 3-seater Type Zero seaplane was salvaged from the bottom of the ocean off the coast of Kisarazu.  Through a friend of mine I have obtained a piece of metal skin from the salvaged seaplane to which anti-corrosive treatment was given to sustain the color scheme. ... Interior was covered in transparent blue with exception to the cockpit that were painted in yellowish-green."

In May 1982 Hasegawa-san had referred to the interior of Aichi D3A1 AII-231 which he had illustrated in profile as follows:- "Inside of fuselage had been painted by anti-corrosion paint in bluish color... Inside the cockpit was covered in yellowish green."


There is a faint yellowish tone apparent in the 'M' series colours shown above but we cannot be sure that what Hasegawa-san saw was this paint or perhaps one of the other Thorpe identified interior colours N5 'light olive green' (similar to FS 34151) or N6 'buff green' (similar to FS 14255).
Image credits: Heading painting ©2010 Shigeo Koike; Rendered colour chips ©2010 Straggler; Kariki 117 chips Summer via Fuku BBS; Aichi "Jake" Photographs ©2010 Owen Veal via Bob Alford.
Posted by Straggler 脱走兵 at 09:30

Thanks for this. Its just in time for the new resin fuselage by Lone Star Models, to upgrade the Nichimo E13A 'Jake' kit.

Thank you for posting!
Nice image of the Sally and Fuji-san, but I will miss the Tojo!

As to the report on Jake cockpit colours, quite interesting and practical as well, what with those Humbrol range references.

By the way, I actually recall a Humbrol brand "Japanese WW II Aviation Colours" set of some six tins from the early 1970's. Unfortunately one of the six colours was a vivid pale violet! This unfortunate choice presumably intended for the Type 2 Rufe!

I recall that the two Green shades, one JAAF, the other IJN, were rather interesting. Would like to hear your thoughts on this...

In any case, is it resonable to assume that the colour notations for the Jake cockpit are valid for other Aichi manufactured airframes?

The Humbrol IJN green was decidely blue looking but supposed to be a match for Thorpe's N1. The IJA green was a brownish olive matched to Thorpe's A3, only slightly greener than the current Humbrol 155 Olive Drab.

I appreciate your comments.

Far too many years ago I built a 1/72 Heller A6M and a 1/72 Tamiya Raiden and finished them in the Humbrol IJN Green. Depending on how the light reflected off the finish, the colour shifted from blue to green and back again!

Hi Nick,
I too have purchased a LSM 1/48 Jake fuselage kit and, thanks to a message on J-aircraft.com, I found your site. I think it is great. I am thinking about darkening Testor's Pale Green (FS 34227) with Forest Green to get to 24226. I will let you know how it works.
Clint