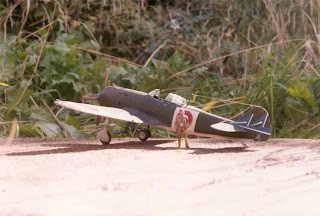 Troy Smith has kindly shared these images of his splendid model of the Nakajima Ki-84 Hayate built from the Tamiya 1/48th scale kit together with a story. The kit was built almost OOB in 1991 after a ten year hiatus in modelling. Troy reckoned he then knew very little about Japanese aircraft but added some tape seat belts, a clear plastic graticule plate to the reflector sight, drilled out the cannon barrels, flattened the tyres and off-set the rudder. 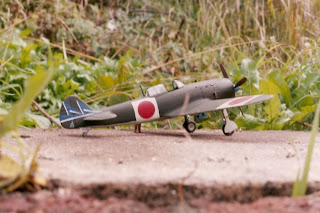 The model was hand brushed with Tamiya acrylics except for the leading edge IFF strips which were painted with Humbrol enamel as Troy found the Tamiya yellow did not cover well. Troy also used Humbrol silver and aluminium paints.  The tail marking for the 47th Sentai's 2nd Chutai was hand painted from a profile (the 47th used a non-standard sequence of colours for Chutai markings). Troy took these photos in his garden in 1995 with his first manual SLR camera. Pontificators of genuine wartime colour photographs should note the very different appearance of the upper surface colour between pics 2 and 3! 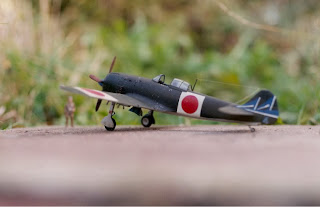 Considered by some to be the finest JAAF fighter aircraft of the Second World War Hayate has always been a favourite with modellers and there have been many good kits of the aircraft. Hayate 疾風 (shitsu kaze) means literally "rapidly wind" and has been translated as a squall, gale or hurricane. It conveys a sudden and violent windstorm but I have no idea why the component characters are pronounced as "hayate" (hah-yah-tay) and not as "shitsukaze"! 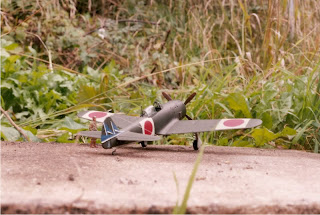 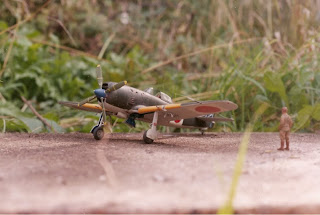 This is really nicely done, and a blast from the past to boot. the first model I had that had nice wheel wells. Seemed so exotic then.

Thanks for sharing these, Nick. One of the things noted on this post is a fairly consistent theme if one looks at the blog entries over the long term: the vagaries of color in color photos (photos 2 and 3). Those appear to be "different greens." In b&w, one would be notably "darker."

It's all fun. It's good to have a baseline for colors based on research, and the work is indeed appreciated.