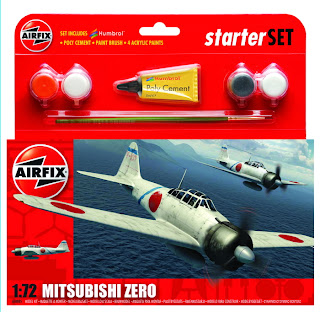 The new mold Airfix Zero has finally eclipsed their old veteran from 1959 whose last fling was as a starter set with paints and new box art in kit no. A50085 (shown above) still being sold by retailers as "new" (and potentially confusing unsuspecting buyers!). Its saving grace is a decal sheet for a Tainan Ku machine V-103 with blue fuselage band and tail stripe. To be fair to Airfix this partial build review of the new Zero (I haven't finished it yet!) is made in comparison to the Hasegawa kit rather than the superlative Fine Molds A6M2. 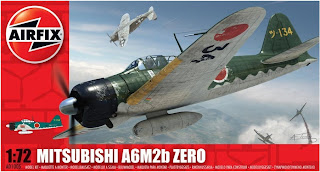 The new kit comes in one of the shallower, end-opening red boxes with the colour painting schematic on the reverse. The clear canopy part is protected in a separate poly bag. 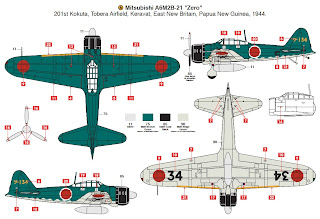 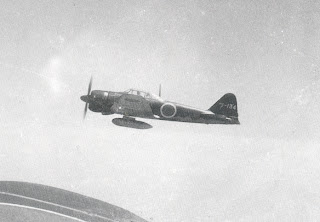 ツ-134 in flight - note the gap between drop tank and fuselage
Only a single markings option is offered in the kit, identified as an A6M2 of the 201st Kokutai at Tobera Airfield, Keravat, East New Britain, Papua New Guinea in 1944. Unfortunately Airfix's research is found wanting here because the markings actually represent an operational trainer aircraft of the Tsukuba Ku, which operated obsolete A6M2 and A6M2-K two-seat trainers in Japan, as shown in the photograph above taken in March 1944. This image reveals that the aircraft which is the subject of the Airfix kit,ツ-134 (ツ = 'Tsu' for Tsukuba) had white borders to the underwing Hinomaru, probably an indication of a trainer yellow undersurface colour as depicted in Francesco Borraccino's superb model shown here and a slightly different pattern to the camouflage undulations along the fuselage. You read it here, folks (well, possibly also at Britmodeller)! The Rising Decals sheet 72-026 for Japanese Navy trainer aircraft includes the A6M2 modelled by Francesco depicted with yellow undersurfaces and the blue-black cowling colour sweeping back to the windscreen (another indication that the aircraft was probably overall yellow originally with the dark green added later in accordance with the 3rd July 1943 directive to camouflage trainer aircraft. The Rising example has white formation keeping markings on the fuselage and the tail cone shown removed. It is difficult to tell from the photo whether ツ-134 has the swept back cowling colour but it would certainly make for an interesting model.
The 201st Ku on the other hand had the tail code W1-xxx which it used from Nov 1942 to at least July 1943. One of the tail fins in the Blayd collection has the tail code 6-136 over an earlier code of W1-187 so 6-xxx might have been used by the unit in the mid to late summer of 1943. The code O1-xxx was used at Truk in 1944. The 201st was formed from the Chitose Ku and 752 Ku in December 1942 and stationed in the Marshall Islands and at Wake until returning to Kizarazu in Japan in Feb 1943. It then moved to Matsushima. After a short detachment in the Kuriles 45 A6M3 (not A6M2) Zeros went to Rabaul aboard the carrier Junyo arriving there in July 1943. There were no Tsukuba connections for this unit.
Whether yellow or grey is chosen for the undersurface colour the suggested paint colour of Humbrol 90 Matt Beige Green is not truly representative of the typical finish for the Zero, being the same paint colour intended for RAF Sky (see my PDF 'Painting the Early Zero-Sen'). If grey is chosen then a dove grey  or pale gull grey similar to FS 36357 or 36492 is recommended, suitable for an older aircraft like this one and dependent on how much weathering and chalking is to be represented. Using Humbrol paints I mix these warm greys using 40 Gloss Pale Grey as the base colour, adding small amounts of a yellow ochre like 225 Matt Middle Stone. Adequately thinned 40 is beautiful to brush paint and levels out nicely to an even finish.
For the uppersurface dark green Airfix suggest 75 Matt Bronze Green which is not bad, just lacking a little in green chroma and tending towards greyish. Another problem is that it is matt whereas the typical paint finish had lustre as seen in the photograph. The original IJN paint colour standard 'D1' was a very dark green indeed, actually called "Deep Green Black Colour" (濃緑黒色) and dark enough to generate descriptions of being "black" when seen in the air. It was around FS 14036 when new and towards 14056 or even 24052 when aged. Despite its darkness it has a very rich green chroma. The other commonly applied IJN dark green 'D2' was just called "Green Black Colour" (緑黒色) and was similar to FS 14077. Again preferring to brush paint using Humbrol (for purely personal and therapeutic reasons!) I mixed this dark green colour as follows:-
6 parts 195 Satin Dark Green
1-2 parts 3 Gloss Brunswick Green
2 parts 104 Matt Oxford Blue
1-2 parts 85 Satin Black
This mix produces a very rich, deep green chroma that overcomes the Humbrol "greyish" tendency for greens and is similar to the Japanese IJN Green hobby paints. The ratio of 3 and 85 can be adjusted to achieve a greener green or a blacker green according to preference and if a more aged appearance is required a touch of red can be added to the mix which will shift it slightly towards olive.

For the blue-black anti-glare and cowling a perfect solution is to mix Humbrol 85 Satin Coal Black and 14 Gloss French Blue in the ratio 3:1 (not just 85 as Airfix suggest). For a more weathered cowling 67 Matt Tank Grey can be used.
Although Airfix's error means that the box art showing combat with P-47 aircraft is fanciful the choice of subject is still a very interesting one. It is just a pity that they don't suggest yellow for the undersurface rather than RAF Sky! ;-)
All in all this is an excellent kit for the price of £5.99 and a worthy alternative to the Hasegawa version. The Hasegawa kit is now difficult to find in the single "standard" edition but IIRC was retailing for around £8-10. The recent Pearl Harbor 'Combo' boxing with two kits is retailing for around £30.
Image credits: All box art © Hornby Hobbies Ltd; Photo © Koku Fan magazine 02/80
Posted by Straggler 脱走兵 at 07:56

I just want to thank you for all the content on your blog, it's extremely valuable. I have spent many hours reading on britmodeller.com trying to find all of your comments on any particular matter. I also can undestand your decision to quit commenting there, so many don't appreciate or acknoledge someone who is truly knowledgeable. Maybe it's insecurity or envy, or just plain old stupidity.
I would be extremely interested to read your other blog American Aircraft for the RAF. Can I send an email to request for an access?

All the Best from Finland

Thank you Simo for your very kind and much appreciated words. Please do send me an email to read the other blog.