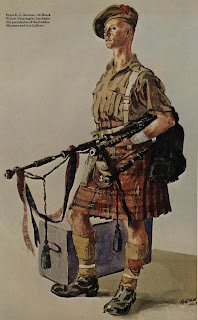 Hail, gallant regiment! Freiceadan Dubh!
Whenever Albion needs thine aid,
"Aye ready" for whatever foe,
Shall dare to meet "the black brigade!"
Witness disastrous Fontenoy,
When all seemed lost, who brought us through?
Who saved defeat? Secured retreat?
And bore the brunt? ~ the "Forty~Two!"
So, at Corunna's grand retreat,
When, far outnumbered by the foe,
The patriot Moore made glorious halt,
Like setting sun in fiery glow.
Before us foame'd the rolling sea,
Behind the carrion eagles flew;
But Scotland's "Watch" proved Gallia's match,
And won the game by "Forty~Two!"
The last time France stood British Fire
"The Watch" gained glory at its cost;
At Quatre Bras and Hugomont,
Three dreadful days they kept their post.
Ten hundred there, who form'd in square,
Before the close a handful grew;
The little phalanx never flinched,
Till "Boney" ran from Waterloo!
The "Forty~Second" never dies~
It hath a regimental soul:
Fond Scotia, weeping, filled the blanks
Which Quatre Bras left in its roll.
At Alma, at Sevastopol,
At Lucknow, waved its bonnets blue!
Its dark green tartan, who but knows?
What heart but warms to "Forty~Two?"
But while we glory in the corps,
We'll mind their martial bretheren too;
The Ninety~Second, Seventy~Ninth,
And Seventy~First ~ all Waterloo!
The Seventy~Second, Seventy~Fourth~
The Ninety~Third ~ all tried and true!
The Seventy~Eighth,  real men of Ross
Come, count their honours, "Forty~Two!"
Eight noble regiments of the Queen,
God grant they support her crown!
"Shoulder to Shoulder," Hielandmen!
United rivals in renown!
We'll wreath the rose with heath that blows
Where barley~rigs yield mountain dew;
And pledge the Celt, in trews or kilt,
Whence Scotland drafts her "Forty~Twa!"
Dugald Dhu 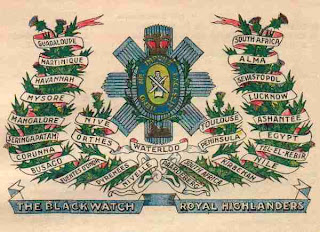 Quite moving und uplifting verse. God save the United Kingdom.

I saw Black Watch and immediately thought it may have been about the Black Watch organised in Darwin during WWII!

Unfortunately they weren't paid in coin until the 1960s but with tobacco during the war years in what is a sad legacy of the thinking of the time.

They couldn't play the bagpipes though.

Well done Nick - my Scottish ancestors would be proud.