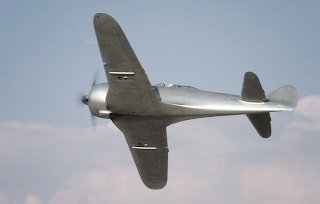 From Japan comes the exclusive news that last month a unique warbird restoration made its first flight. Former airline pilot Shigatsu B. made a succesfull 14-minute flight in a restored Nakajima Ki-44-II Hei, better known in the West as the "Tojo". Long thought to be extinct, in 2002 a team of wreck hunters discovered a nearly complete 9th Sentai machine in a boggy forested area in North East China. The aircraft  had force landed there sometime in 1945. The condition of the wreckage was good enough to warrant full restoration and after lengthy negotiations the wreck was shipped to Japan and a secret restoration project was started in 2004. Although an estimated 70% of the airframe had to be newly built and power is provided by a Russian Shvetsov ASh-82 engine instead of the original Nakajima Ha-109, it is the first time a Ki-44 has taken to the skies in over 65 years. There are yet unconfirmed rumours that the aircraft might be shipped to Europe to participate in some major airshow events in the UK and France, but it would seem more likely that for the next few months the airframe will remain in Japan for further test flying. The same team has however confirmed that a Ki-27 "Nate" is currently under restoration as well, with its first flight expected later this year.
Image credit:- via R Olsthoorn
Posted by Straggler 脱走兵 at 07:41

Very surprising news. Thanks for posting.

What happened to the Stirling?

Ya got me. That was evil.

This is great news! I would love to see more photos of this Ki-44.
Great work!