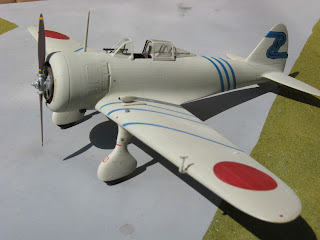 Mark Smith kindly sent these images of his Ki-27 model to celebrate final completion of the Ki-27 Aces manuscript!  The model was built from the 1/48th Mania kit (which has been re-issued many times by Hasegawa) and all the markings are painted on using stencils as it was made pre-Lifelike Decals - whose 2007 sheet Type 97 Fighters Part 1 48-020 includes them. It depicts an aircraft of the 4th Sentai attributed as the mount of the Sentai Commander Lt Col Saburo Hayashi with the markings painted in the cobalt blue of the Sentai Hombu shotai, as based at Kikuchi in Kumamoto Prefecture, Japan in September 1940. I especially like the shade of blue Mark used for the Sentai Hombu colour (he thinks it might have been Pactra 'Insignia Blue' in the small glass bottles). The blue sprayed beautifully and the black detail on the tail marking was added by hand afterwards! Mark also added a Squadron vacform canopy displayed in the open position as the original kit canopy is a one-piece moulding. 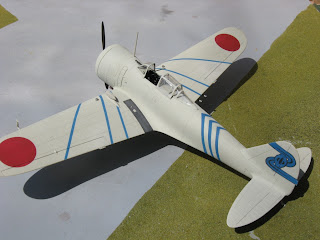 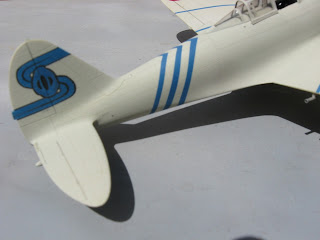 The 4th Sentai, formed in 1918, are best known as a Homeland Defence Sentai flying the Ki-45 Toryu two-seat heavy fighter in the last two years of the war but they retained the Ki-27 for additional pilot training and at the time of the B-29 raids formed a fourth temporary Ki-27 Kogekitai (attack or assault unit) which participated in air defence interceptions of the bombers. I have described this in more detail in the forthcoming book. The unit tail marking was inspired by their airbase of origin at Tachiarai which means washing a sword in a stream and was symbolised by a sword handguard - tsuba (鍔) - positioned over a stylised stream 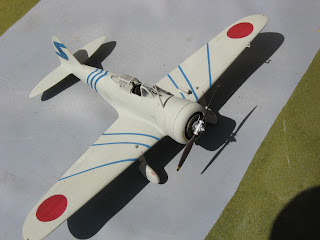 'proton45' posted a link at j-aircraft.com to some interesting footage from Abe Yutaka's 1940 Toho film Moyuru Ôzora (燃える大空 "The Burning Sky") which he has uploaded to You Tube:-
http://www.youtube.com/watch?v=Q3jH4TQXopY&feature=youtu.be 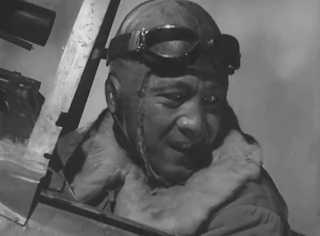 This is well worth watching if you are interested in the 97-Sen and the whole film can still be purchased from Japan in DVD format. The film dramatises one of the battlefield rescues that were to be regularly performed over Nomonhan and the manner in which the passenger was carried is a revelation! 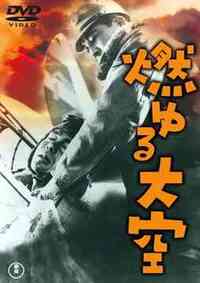 It was conceived as one of the first Hollywood-style "spectaculars" to be shown in Japan and the Toho brochure described how "Thrilling dogfights and burning patriotic passions raise the spirits of the home front to a fever pitch!" The characters 燃える - moyuru, or sometimes moeru, mean to burn or to get fired up, as in burning or blazing passion, so there is a double meaning in the title. It was not well received by all its critics. Aoki Bunzô in Nihon Eiga thought the film was unsuited to the Japanese character and primly concluded that "the spectacle is a genre still undeveloped in Japan. Perhaps the main reason for this is the lack of capital, but almost equally important is the fact that life in Japan is so quotidian as to be the very opposite of the spectacular. There can be little doubt that Flaming Sky is the best film of its type to appear so far in Japan, but those of us who have seen what the Hollywood aerial spectaculars can achieve, know all too well the degree of its insufficiency". 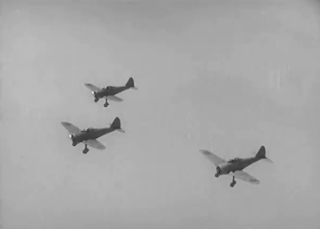 In fact the main sub-text of the film, beneath the spectacular, is concerned with duty, sacrifice and death. "Do you think you are actually the possessors of those bodies of yours?" demands an officer of the pilot trainees, angry at the greed one displays during a meal. As one they shout that the rightful possessor is "His Imperial Majesty's Empire!". Two pilots contemplate how important it is to die admirably and in an address the CO chooses this theme and advises his men that when they feel anxieties they should consult the Imperial Rescript, to "set your soul on fire and bring the spirit of bushidô within you". I wonder if any Western intelligence agencies marked this film and if they did what they might have learned from it?
Image credits: Ki-27 model © 2012 Mark Smith; Moyuru Ôzora stills & DVD cover © 1940 Toho Co. Ltd; Acknowledgements: Peter B High 'The Imperial Screen' (University of Wisconsin) 2003
Posted by Straggler 脱走兵 at 12:44

Thank you for posting Mark's excellent model! Interestingly enough, even 1/32 Special Hobby kit lacks two illumination cutouts in the cover above the instrument panel (clearly visible in the Burning Sky footage). As far as I can see, Mark has knowingly represented this small detail!

Thanks for the kind comments,

Great work on your build, Mark. Thanks for the info on the Moyuru Ôzora movie, Nick.

Moyuru Ôzora was a vital reference when creating the 3D model for Ki-27 Aces. The film has many great close-ups of the cockpit area and other rarely seen parts of this beautiful aircraft.