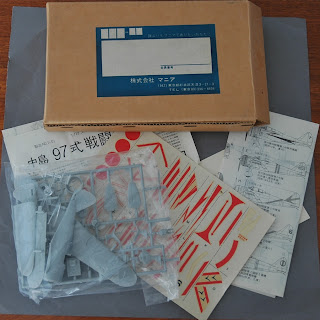 The Mania 1/72nd scale Ki-27 was originally issued in 1970 and first appeared in the West in the so-called "mailer" box as shown above. Although the box was obviously intended to be sent through the mail I've never seen one with an address written on it! The kit was molded in grey plastic and came with a very comprehensive decal sheet with no less than eight options. 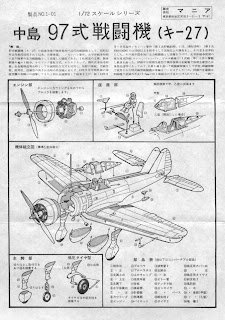 The colour scheme for the model was fully described in the instructions by Rikyu Watanabe referencing Dr Yasuho Izawa and translated as follows:-
"The airframe should be overall light ash-green colour (IJA gray-green - a glossy gray that has a very slight green tint).  After the Pacific War started, some units painted the upper sides dark green colour (IJA dark green) (matte).  Some type 97 fighter-trainers that had their spats removed were painted in a cream-gray.
The interiors were painted dark indigo grey colour.  When the propellers were silver on the front and dark red-brown on the back, the warning bands on the tips were in red.  When both sides of the propellers were in dark red-brown, the warning bands were in yellow.  The labels near the roots of the propeller were in chrome yellow.  The circular oil cooler was brass, so it should be painted gold and then weathered a dirty color.  The square oleo labels should be silver (duralumin plates).  The top of the front of the spats should have a red outlined rectangle with ノルナ [noruna = No Step] printed in black.  The landing gear oleo labels and various other tabs should have サワルナ [sawaruna = No Touching] printed in red.
The location for the platform used for maintenance was indicated by two black bands under the main wings.  There was a small black arrow on the side of the rear fuselage.  The airframe serial number was stenciled in black on the landing gear and/or immediately in front of the horizontal tailplanes.  Airframes which had their cowlings painted red or another color have a small unpainted area at the front of the cowling.  This unpainted area was left to avoid overpainting the machinegun synchronization cam adjustment marks." 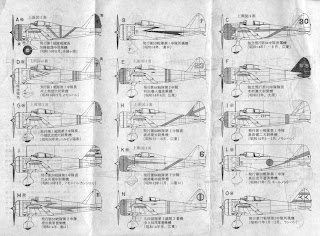 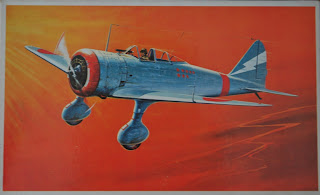 In 1971 the kit was reported to have been issued (at least in the West - it might have been earlier in Japan) in a full colour box as 1-01. I have never seen a box marked with that number. All the single boxes I have seen, like the one shown above, are marked F-1001 and contain the same kit as the mailer box. 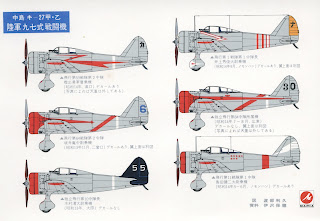 The same decal sheet was included but now the monochrome profile sheet was incorporated within the instruction sheet and a separate colour profile card showing six aircraft was added. The strange thing about the six profiles is that two of them, the 10th DHC and 84th DHC examples, are not provided for by the decal sheet! The striking box art took up the whole of the box top, with no lettering on it whatsoever. The grey colour shown in these profiles is a slightly greenish grey around Munsell 7.5 GY 7/0.5 just a little warmer and greener than FS 26440. The closest paints out of the tin in Humbrol are the old Authentics HB 6 Sea Grey Medium (the current Satin 165 seems a little darker) or Satin 129 US Gull Grey. 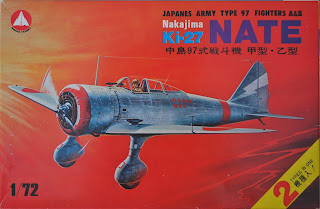 The larger double box, as shown above and containing two kits, was issued around 1975 as 03-800, although Burns reports it as being 05-800 - perhaps a typo. The box art was the same, although re-aligned and with a camera added to the port wing (!), and titles were added. The two kits were molded in different colours, one in grey-green and one in silver. The kit contains a similar coloured instruction sheet to the 1/48th scale kit, repeating the box art and showing the same six colour profiles as the earlier kit but to a larger size. I have one example where the markings on these profiles are shown in colour but the aircraft themselves are only shown in outline, probably a printing error.

The Mania logo was changed between the issue of the two kits with that shown on the left above being the earlier type. Both forms were displayed on a Hinomaru (日の丸 - sun's disc). The Mania Hobby Co., Ltd. address was given as 34-23 2-Chome Higashimizumoto, Katushika-Ku, Tokyo, Japan.


Hasegawa took over Mania in 1977 and began re-issuing the whole range in their own box designs, art and logo. In all these Mania releases, unlike any of the later Hasegawa re-issues, the sliding canopy was provided as a separate  part to be displayed open - or not at all, as many Type 97 were flown with the sliding canopy actually removed, especially the Ko variants. In addition parts were included to display the aircraft with all three variations of undercarriage seen on the Ki-27 and this feature was continued by Hasegawa. I have always liked the Mania kits and prefer them to the later Hasegawa issues for various reasons, not least the separate canopy, quality of their presentation and pure nostalgia, but surprisingly they don't seem to command such high prices on resale as the earliest Hasegawa issues.

Thank you for posting excellent reviews of Mania kits in 1/72 and 1/48. It will be very interesting to see 1/72 kit compared against more recent offerings from ICM and RS Models. IMHO ICM model has the best surface representation in this scale (with overlapping panels, subtle riveting and fabric representation), but has some fit issues.

Ah, the memories. I bought and built one when new, out of the plain brown box.
Perhaps two weeks ago I saw one on US eBay, which the seller could not ID as to a/c type or kit manufacturer (apparently not a modeler). I was able to tell him/her what it was and who made it; the listing was then updated to make a bit more sense.

Hello Nick; Very nice post, lots of good information.
I've had some experience with vintage Mania kits from back in the early to mid 1970's. Specifically the NATE, SONIA, and KATE in 1/72.
As I recall one significant difference between the original Mania SONIA and the Hasegawa
reissue involved the canopy. You had to drill out the hole for the tubular gun sight on the Mania version. Kind Regards, noel

Thanks for the translation of Rikyu Watanabe's color notes from the 1/72nd scale Mania kit.