In the blog post comments on Art McNitt's 1/32nd scale Ki-61-II Kai Bubbletop, correspondent Ken Glass mentioned Art's previous 1/48th kit bash made from combining Hasegawa's Ki-61 and Ki-100 kits. Well, here are some views of that excellent model, courtesy of Ken. Correctly speaking I think this should be considered a Ki-61-I Otsu Kai rather than a Ki-61-II Kai, as Art used the Hasegawa Ki-61-I kit nose. The Ki-61-I Kai designation is sometimes used for the Ki-61-I Tei where the nose was lengthened to accommodate the 20mm Ho-5 cowling guns. Art's model retains the distinctive nose configuration of the Ha 40 powerplant and is representative of an even rarer Hien bubbletop!

It's probably too much to hope that those who argue interminably about the paint colours shown in wartime colour photos will take note of (and on board) the very different hues seen on the same model in the images here even though the red of the Hinomaru (or other chosen "control" colour) appears similar in each. You can write pages of objective colour analysis based on the surface measurements and pigments of actual paint and it will sink like a stone but along comes a wartime colour photo at the end of a long and dubious processing journey and the enthusiastic speculation and opinion about colours is endless. 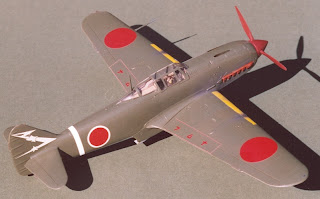 Hello Nick; Very interesting to see the range in shades on the same model depending on the lighting. I've seen the same effect among my own modest efforts, as well as on model show display tables. Fine looking model nicely photographed, thank you for sharing. Cheers, noel