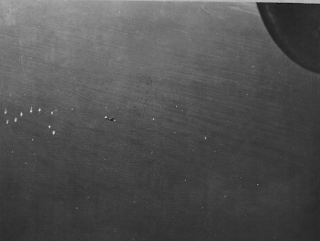 Further to that Zero over Hong Kong "in shadow" (!) here is another image of an aircraft reported as a "Zeke" intercepting a B-24 off the Malayan coast with what appears to be a light painted tail fin and rudder - and possibly a light painted cowling. At first glance I didn't think this aircraft looked like a Zero but as it is in motion the shape might have become distorted. I'm tempted to think the tail cone has been removed too but that might just be an impression given by light coloured tail. 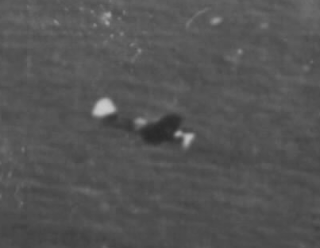 It would indeed seem that the highlights on this photo were smeared out due to the motion of the aircraft. The spinner/prop is also looking stretched.

The vertical tail could be light coloured or simply well-polished and catching the sun, as does the cowling (which appears to be high-gloss black). The fuselage however does not catch any notable highlight, which seems odd. Would they polish the tail fin and not the fuselage or was the tail fin indeed bright coloured?