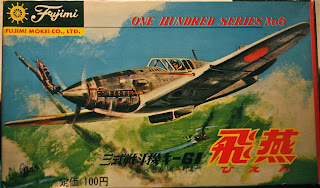 Back in April I mentioned the relative decency of the old 1/70th scale Nichimo Kawasaki Ki-61-II in a blog about the new RS Models Ki-61-II kits and subsequently posted pics of the Nichimo model as built by Ken Glass. To complete the picture the horrible Fujimi Ki-61-II Kai was mentioned but not all the issue version box art of that kit was shown. The earliest 1965 'One Hundred Series' No. 6 box art for the Ki-61 飛燕 (Hien - swallow in flight) as shown above managed to look even worse than the kit itself whereas the subsequently issued # 7A6-100 (shown in the previous blog) rather nicely depicted a 244th Sentai Ki-61-I! 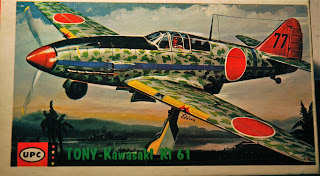 In 1966 the kit was released as 8016-49 by UPC with Scott Eidson (b.1908) box art as shown above. Eidson's distinctive art usually featured dawn or dusk take-off or landing scenes (hard to tell which) with moody looking skies and often shadowy buildings with twinkling lights and the suggestion of recent rain. The Tony box art has a shadowy warship in the background. In the mid-1960s UPC - Universal Powermaster Corporation - marketed re-boxed kits from many sources including the emergent Japanese companies. The UPC kit - just labelled "Tony - Kawasaki Ki 61" - is identical to the original Fujimi kit down to the silver plastic but contains a new instruction sheet. Burns lists the kit as to 1/70th scale.

As previously noted, the same kit was subsequently re-issued by Bachmann Bros, Inc., from 1972-73 as 076-60 with K Hashimoto artwork depicting a 244th Sentai II-Kai taking off. This artwork had appeared in monochrome on the 'One Hundred Series' instruction sheet and presumably a missing link here is the Japanese issue with the same boxart? The Bachmann released kits are generally known as Bachmann-Fujimi as the two logos appear together on the box. The Fujimi kit had been previously issued in the West in the late 1960s by AHM as FC-6 - with an identical box and box art as shown below. AHM - Associated Hobby Manufacturers - had imported and re-sold the Fujimi kits until 1971 when Bachmann took over the relationship with the Japanese company until 1975. 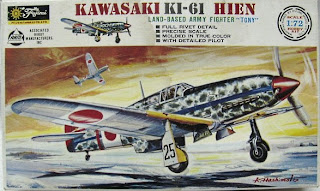 Further to my blog in September about the new Glen book by Ryusuke Ishiguro and Tadeusz Januszewski which included mention of Glen kits, Jacob Terlouw has very kindly sent me these images of the 'airmodel' Frank-Modellbau epoxy resin kit of unknown vintage and the plans sheet from the Wings 72 vacform. 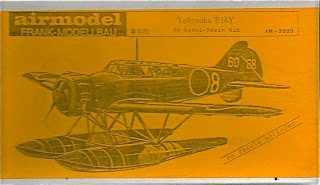 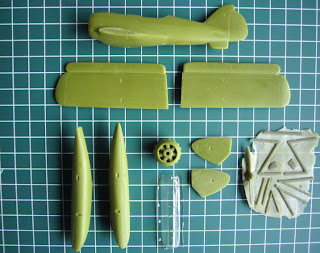 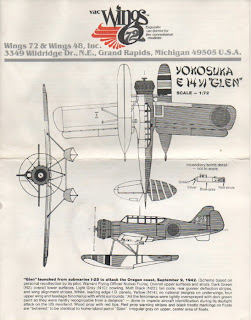 Thanks to Jacob for thoughtfully providing these additional images to share. As always, any more information on these or similar kits, personal memories of them and any box art images are always welcome here, thanks.

Thanks for the time-machine posts lately! After finding and building the Nichimo 1/72 Claude as a kid, which wasn't too shabby for those days, I remember how disappointed I was when I saw their Tony. Besides the Claude, I loved the Japanese airplanes their 1/72 kits purported to represent...but any teenaged geek who had the William Green books with their tiny three-views could tell that something was horribly wrong. When the new Hasegawa Tony came out (early to mid seventies, I think) around the same time as their Shoki, they oozed finesse in comparison.

This blog post refers to the Fujimi Ki-61-II Kai, not to be confused with the Nichimo Ki-61-II Kai which I blogged about in earlier posts and which, for its time, was a relatively decent kit as I believe Ken Glass's model shows! I'm surprised that you were disappointed by the Nichimo Tony in comparison to their A5M4 and against published three-views because it shapes up quite well against plans and the surface detail is actually quite nicely done and I would argue better than the Claude's. Also it should really be judged in the context of being before the Hasegawa kit, which was a Ki-61-I Tei anyway and by comparison with very much worse contemporaries like the aforesaid Fujimi and the Revell kit.

Even post Hasegawa, before the Fine Molds series of Ki-61/100 types, the Nichimo kit represented a viable and respectable means to a Ki-61-II Kai out of the box. Therefore I still - and perhaps sadly - rate it! ;-)

I have the same UPC box art kit except in the 1/50 scale version (#8003-79), the "TONY-Kawasaki Ki-61" title is in red rather than blue in the 1/70 scale version, issued during the early 1960s. 79 cents retail is about par with the Aurora and Lindberg 1/48 scale kits of the 1950s and accuracy wise, it's about the same. Oversized canopy and hinomaru scribed on the model. The decal sheey have only hinomarus and no inaccurate tail number shown on the box art, which probably came from the Ki-61 II displayed at Yokota base at the time. The kit is inaccurate overall but the three-view profile provided in the instruction sheet is far more accurate. About the same size of the much better Tamiya 1/50 scale Ki-61 II kit first issued in 1968, which I also have. Still a nostalgia of old times when they were just toys.