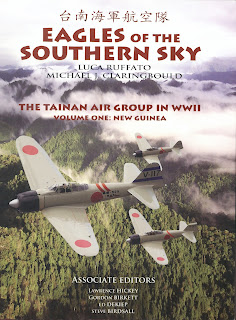 In 1970 the UK was a pretty miserable place to live and work. The daydreams necessary for daily survival from terminal boredom were encouraged by the release of a slim paperback called 'Zero Fighter' in the Ballantine's Illustrated History of World War II 'Weapons' series which tied in to a previously published magazine part work. They were virtually photo books with accompanying text, in this case written by Martin Caidin, but the introduction by Zero ace Saburo Sakai hooked a sub-interest in the Zero to the Tainan Kokutai. With only Revell, Airfix and Frog dark green Zeros as a visual reference it was something of a revelation to see these enigmatic aircraft in "light grey" but it was the double page photo of a group of Japanese pilots, a war correspondent and a Zero of the 'Lae Wing' on pages 128-129 that especially captured my imagination back then. The transition of appreciation from the cartoon characterisations of war comics to the real life pilots was made. Life events then intervened and it was not until 1978 that Sakai-san's exploits and I were re-united when I discovered the Bantam edition of 'Samurai' with cover art by Keith Ferris. That re-kindled my earlier fascination and provided more details of the Tainan Ku air campaign over New Guinea but still left many unanswered questions. Then, in 1985 'Winged Samurai' by Henry Sakaida added another dimension, with more photographs and the first endeavours in linking Sakai-san's encounters to the records of his opposition. More faces emerged from the fog of war. 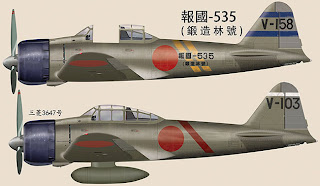 An example of the profiles in the book

Little did I know it then but these books were to be only the starter courses for the veritable feast, the huge table creaking with food and delicacies, the multi-dish banquet that is 'Eagles of the Southern Sky - The Tainan Air Group in WWII - Volume One: New Guinea' by Luca Ruffato and Michael J Claringbould and published by Tainan Books. Back in 1970 I could never have dreamt of a book on this subject with so much meat, so much colour, so many historical details or images and so meticulous a resolution in examining claim and counter-claim. This soft cover, large-format (11" x 8.5") book has 352 pages packed solid with more than 300 photos, colour art, profiles (of which no less than 33 depict Zero fighters) and historical data, covering not just the Tainan Ku but the units they served alongside and in action against in simply stupefying detail. Here I must declare an interest, for I provided Michael with a little information which he has been kind enough to acknowledge in the book. But at that stage of very minor involvement I had no idea what to expect from the final result that has been achieved, which is extraordinarily outstanding. This book wowed from the moment it arrived.

The book is set out as follows, first with preliminary information:-

Then the main chapters of the book plot the history and operations of the Tainan Ku in a chronological sequence containing many first hand accounts:-

The maps supporting this text are as follows:_
Aircraft colour and markings data consists of the following sections:-
And finally the Appendices and Index:-

Although the Zero paint colour is at first described as 'semi-transparent' this is corrected later in the text where it is described as an opaque paint of solid colour. The Zero fighters in the book are depicted both in the paintings and profiles in the correct colour scheme of an amber-tinted grey. Slowly, this 'revision' is gaining ground, although there are still many who, not surprisingly, find the subtle pigmentation difficult to visualise and grasp.

A unique and visually impressive feature of the book is the series of no less than 28 colour illustrations depicting some of the air battles described, using computerised art that includes the actual locations where the events took place in photographic realism. For the first time it is possible to directly see the aircraft over the actual rugged but beautiful terrain of New Guinea. These encounters are carefully plotted in the text, friend and foe, with the correction of much previously confused, inaccurate or unknown detail. Whilst this debunks many of the claims the result pays homage through truth to the magnitude of the service expected and given by the young men on both sides of the conflict.

The colour profiles cover not just the Zero fighters of the Tainan Ku, each with an in depth explanatory caption, but also other IJN types and the Allied aircraft ranged against them, P-40s, Airacobras, Marauders, Bostons, etc., with comprehensive captions for each one. As modelling inspiration for an early New Guinea campaign theme it is a one stop shop. The photographic content is comprehensive and impressive, from Japanese and Allied sources, including private collections, with many new and revealing images printed clearly and to a good size.

Others have expressed disappointment that this book is not in hard cover. At over 300 pages it has the weighty heft of the best telephone directory a historian or modeller is ever likely to receive but personally I found it easy and comfortable to sit with and read in this format. This mighty tome presents a cornucopia of pure history and is a testimony to the research and dedication of the authors and contributors who are to be congratulated on a magnificent achievement. It is very highly recommended to everyone with a historical or modelling interest in the subject.

The book is available via www.tainanbooks.com for USD$78.60 (approx £50) and is worth every cent or penny.

Thanks for the notice on the new book, Nick.

Thank you for announcing this book here.

It seems your path leading to such great interest in WWII Japanese aviation, and in this particular unit, has been parallel to mine. I first read "Zero" as an 11 year old in 1962. The rest followed as I could find them.

Sounds like a must-have, Nick! And considering this is just volume one...
I'll pass on the link to my wife... my birthday coming up and all! :)

I was luckily one of the very first people to buy this book back in 2012 about the Tainan Kokutai Air Group and was surprized to see it now commands from a low of US $225.00 up to US $715.00 a copy used.
No Mine in mint condition is not for sale ever one of the best researched immensely readable books on the other side of the story as most know it that shows from great research the tragedy and heroism and just plain bad luck or in many cases bad weather that wrote the epitaph for many a combatant from both sides.

I paid around Au $50.00 at the time back in 2012 and consider it worth at least the US $225.00 it goes for at a minimum these days as still good value, Not so sure about Amazon at over US $700.00 though but then again for a collector if prices keep going up maybe as an investment.