Where Are They Now? Revell (Japan) 1/144th Mini-Series

When I mentioned the range of 1/144th scale kits from Revell (Japan) in Mark Smith's article on his builds in that scale my memory was playing tricks on me. I thought the range had included only fighters but on checking the 1975 Revell (Japan) catalogue I see that it included some multi-place, single engined IJN types too - the "Kate", "Val", "Judy" and "Myrt" no less. There was a Shiden and Shiden-kai too. 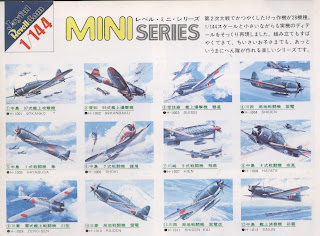 From Burns* it appears that the whole range might not have been exported to Europe and I have no idea if the Revell Japan kits originated from other company's moulds or indeed wound up in other company's ranges. It seems that only the Ki-43, Ki-44, Ki-61 and Ki-84 went to the UK and Germany with the others only being sold in Japan and Mexico. In Japan the range was also sold in gift sets with pairs of "Kate" with "George", "Oscar with "Frank" and "Zeke" with "Myrt".

The German range included a Ju-87 and the US range a Douglas Dauntless. At the time Gunze Sangyo Inc., were the licensee for Revell in Japan and their early range of paints appear in the catalogue.

Upon checking eBay this AM, it seems all subjects within the German and US ranges were still available from Revell-Germany in the early 1990s. Examples of all were found available for bidding on eBay this AM. But not a single example from the Revell-Japan range of boxings was to be found.

I do not now remember seeing or being aware of the Japanese range of kits. The Imai 1/144th scale range was familiar to me by the mid to late '70s. A hobby shop worker I then knew had most of the Imai range in his personal collection. That he did not have the Revell-Japan boxings, might indicate those may not have been available within the US at that time. Others may know more, or perhaps, remember better.

Thanks Ken. In recent years I can recall seeing the Hayabusa and Shoki on eBay in the Revell boxings as shown here but not many/any of the others. I wished I had saved the images of those to compare.